The whole of the South Island will move in to orange when the new traffic light system kicks in on Friday, Prime Minister Jacinda Ardern has announced.

At Monday's post-Cabinet press conference Ardern announced the levels at which different parts of New Zealand will move into the Covid-19 Protection Framework - known as the traffic light system - on Friday.

Under the system - which relies heavily on vaccine passes and places restrictions on the unvaccinated - parts of New Zealand will enter at the red setting and others orange.

The following areas will enter the framework at red: 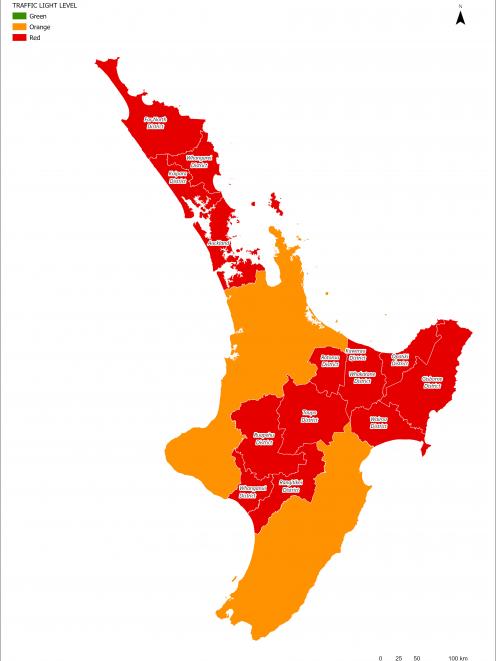 The following areas will enter the framework at orange:

It comes as the Delta outbreak continues to spread slowly but steadily across the country, with 182 new cases today. There are now 93 people in hospital - up 11 from yesterday - and 10 in ICU.

Ardern said there would be more certainty under the new system, which would reduce the likelihood of lockdowns.

"But Covid-19 is still with us, and the emergence of the Omicron variant overseas is a reminder of why we need to maintain a careful approach and keep public health measures in place to protect us.

"We have been cautious with this initial designation of traffic lights as the new framework beds in. Cabinet will review settings and provide an update on Monday 13 December. 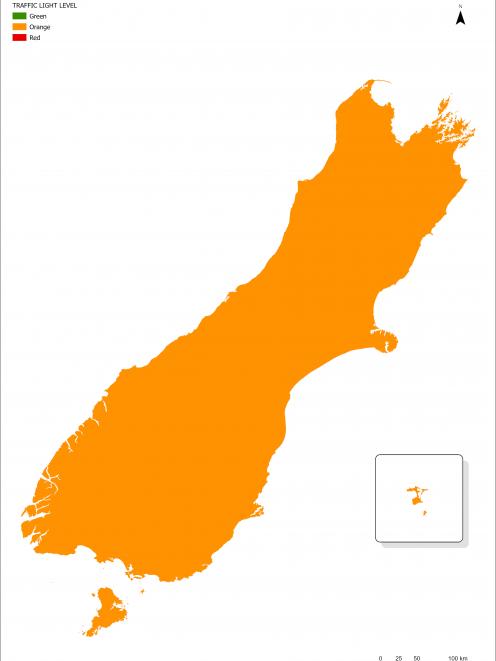 "The next update by Ministers will be on Monday, January 17, and will continue on a fortnightly basis."

The factors considered when setting the colours in each region included vaccination, the state of the health system, testing, contact tracing and case management capacity, as well as the rate and effect of Coivd-19 transmission.

Ardern said New Zealand was in a good position to move to the new framework.

"We’ve vaccinated a significant portion of the team of 5 million, and now is the time to move to a new framework.

"We’ve come through the past two years of COVID in better shape than nearly anywhere in the world, with the lowest case and death rates in the OECD, a growing economy, and among the highest rates of vaccination in the world.

"We’re now in the strongest position to move forward into the next phase." 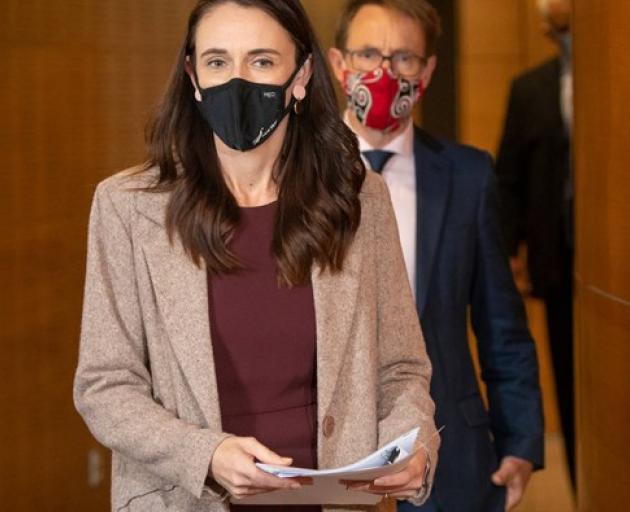 What are the rules for orange?

Under the orange setting  scanning will be required, as will masks on flights and public transport, and in taxis, retail and public venues.

If they are not used, limits of 50 people will apply. Hospitality businesses not requiring passes will have to operate contactlessly.  Close-contact businesses such as gyms can only operate with vaccination passes.

What are the rules for red?

At red, action is to protect at-risk people and the health system from an unsustainable number of hospital admissions.

Scanning will be required, as will masks on flights and public transport, and in taxis, retail and public venues. Public facilities will have a 100-person limit, and retail will be open with capacity limits.

Working from home will be encouraged. Education providers will be open with public health measures in place. The vaccine pass will be required at tertiary institutions.

Ardern said the certainty and stability of the traffic lights replaced the sudden lockdowns and restrictions of Alert Levels.

"Our schools will stay open at every colour and businesses will have protection through My Vaccine Passes to keep operating.

"Vaccinated New Zealanders using vaccine passes will be able to do many of the things that were previously treated as high risk like safely going to bars and restaurants, getting a haircut, and going to a concert or the gym. In Auckland, it means seeing friends and family indoors again.

"But there is more to do. There are 160,889 Kiwis due for a second dose – if everyone got it this week we would be at 89.3 per cent fully vaccinated. I encourage those people to get their second dose today to benefit from the full protection of the vaccine, and to be able to get their Vaccine Pass.

Ardern started the press conference by addressing the Omicron variant. She said New Zealand did not have the new variant but it was a reminder why strong, ongoing pandemic responses were needed.

Some countries have had to stand up borders or reopen quarantine facilities.

"We are not powerless tough."

Omicron had not changed advice on boosters.

Support for business under the Traffic Lights system

Businesses will be able to get one-off payments of up to $24,000 in government support as they move into the new traffic light system.

Finance Minister Grant Robertson said the transition payments would be particularly for businesses in Auckland, Waikato and Northland to help them get up and running again after the lockdown restrictions that have applied since mid-August in some areas.

The one-off payments would be available on December 10, made through the Resurgence Support Payment system. The new support package is expected to cost $350 and $490 million all up.

It was a higher rate than the current resurgence support payments – and would be calculated at $4000 per business plus $400 for each full time employee, up to a cap of 50 FTEs – a maximum payment of $24,000.

It would be for businesses which could show their revenue was at least 30 per cent down between October 3 and November 9 compared with a typical week in the six weeks prior to August 17.

"This payment is a recognition of the long period of time businesses in Auckland, in particular, have spent with restrictions in place prior to shifting to the new framework."

He said at all levels of the new traffic light system, most businesses will be able to operate at almost full capacity.

He said the Government would monitor the impacts the traffic light system was having on businesses and expected to report to Cabinet in early 2022 with any further recommendations for support – however, he expected future government support would only be offered at the red level.

"To be clear about this, if it is deemed necessary targeted support would only be available under the Red setting of the new system as businesses that operate vaccine passes have no significant restrictions at Orange and Green."

The final round of wage subsidies and resurgence payments opened on Friday, and Robertson said those would still be paid out in addition to the transition payment.

Payments for staff to be on leave while isolating or waiting for test results would also continue to be provided under the traffic light system - but the leave support system would move to weekly rather than fortnightly because of shorter isolation periods.