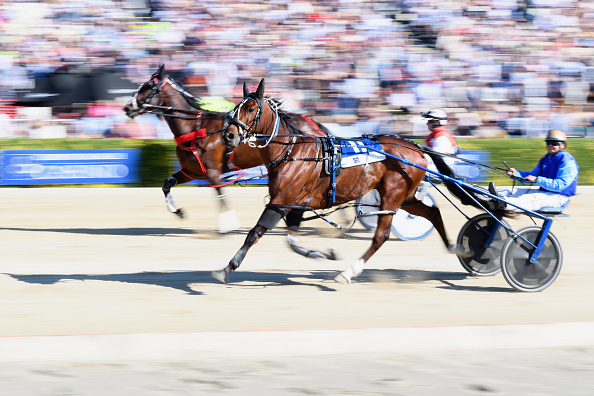 Photo: Getty / File
Pukekohe trainer Ray Green, 75, will have his first ever starter in a New Zealand Trotting Cup at Addington today.

Green trains one of the favourites - Copy That.

In its five races as a 4-year-old Copy That has won four times and was second in the other.

Copy That will start on the front line for the 3200m race and Green says the 4-year old stallion prefers to be on the front.

"If he steps away quickly it's a very good draw, if he steps away slowly he could get inconvenienced from that particular draw, but I'd rather be there than most other places so he's good in front and he's never been passed but he's quite capable of coming from off the pace as well.

Copy That beat the other contenders in Ashburton a fortnight ago, including co-favourites Self Assured and Spankem from the Pudon-Rasmussen All Stars Stable.

"He's got the best form line in the race for sure and his last start (in Ashburton) he beat the best horses, so his form line is super", said Green.

Green admits he'll probably have a few nerves on the day and while it'll be Copy That's first New Zealand Cup also, he doesn't expect the horse to have any problems in front of the big crowd.

Meanwhile the North Canterbury trainer Regan Todd will also have his first ever runner in the Cup.

Todd, 30, took over the training of former Cup winner The Fixer earlier this year.

The horse was trained by the All Star Stable when it won in 2018, but the owners felt the horse, who suffers from feet problems, would be better trained on the beach.

Todd admits while he can't be considered one of the favourites, he is happy with The Fixer's form.

The Purdon-Rasmussen (All Stars Stable) has won five of the last six NZ Trotting Cups.

It's also a big day for the Butcher family with father David and his 2 sons Benjamin and Zachary all having drives in the Cup.