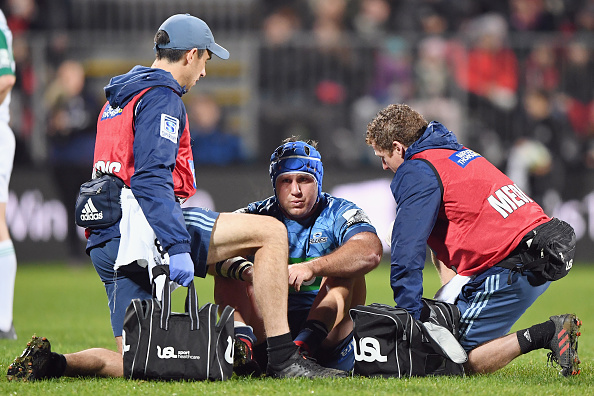 Parsons, a centurion for the Blues and North Harbour and a two-test All Black, said he is retiring on medical advice, after being out of the game for several months following his latest head injury.

The 34-year-old was due to play for the Blues this season but is now expected to be replaced by Bay of Plenty hooker Kurt Eklund.

"Firstly, I want to thank NZ Rugby, the Blues, North Harbour and Takapuna rugby club for the opportunities they've afforded me," Parsons said.

"For me it's not about sadness it's about celebration. I've been very fortunate to represent my two home teams the Blues and North Harbour over a hundred times each which is a dream come true, and to play two tests for the All Blacks is something I'll never forget.

"I'm extremely grateful to have been a part of these great teams and even more grateful to the people that fill them. To all the coaches, medical teams, staff, management and teammates I've had the privilege of working with over the years - my family and I thank you. Your guidance and support have been second-to-none and I couldn't ask for a better bunch a people to go to work with every day.

"To the loyal fans of the Blues and North Harbour - thank you. You have been only but amazing throughout my whole career.

"I've studied and gained a number of skills on and off the field throughout my whole career that will transfer into the next stage of my life. I'm grateful for the opportunities Sky and NZME have given me in the broadcasting space and look forward to exploring that more. One thing for certain is that I love this game and will be staying involved and looking forward to the opportunity to give back.

"Finally, to my friends and family a massive thank you for your unwavering support. In particular, my wife Sam, daughter Maddy, Mum, Dad, Sarah, and Nicholas - I would not have been able to do any of this without your love and willingness to sacrifice to allow me to live out my dream. As this chapter ends, I'm looking forward to the next and can't wait to see what that adventure holds."

Blues chief executive Andrew Hore said it was a sad day for the team.

"But it is a real celebration that a local boy has been able to move through the pathway from secondary school, to club, to his provincial union, his Super team and to the All Blacks," Hore said. "James is entrenched with pride and deeply loves where he lives and who he represents.

"They say a true talisman is a player who does more than can be measured. The level of support that James has given to his captain and Blues both on and off the field is immeasurable. He deeply cares for our organisation and everyone in it and we care deeply about him and his family. They will be welcome as a part of the Blues always."

North Harbour chief executive Dve Gibson said Parsons gave everything to every jersey he pulled on.

"JP is the sort of person every union wants and needs," Gibson said. "He has been through so much, both on and off the field, at Harbour, some good times and challenges but he is someone you can always rely on, especially when times get tough.

"He is many things to the people that know him- a Harbour centurion, captain, club man, teammate, friend, family man and more recently a father. His contribution cannot be measured but I would like to acknowledge and thank JP on behalf of North Harbour Rugby. We wish him, Sam and his whanau every success in the future."

"I want to acknowledge and thank him for the tireless work he has contributed off the field on behalf of the players as a board member of the NZ Rugby Players' Association.

"He has always been prepared to engage and look for solutions on behalf of his fellow players. James has a lot to offer rugby in the future and I am sure he will continue to be a real asset to the sport."