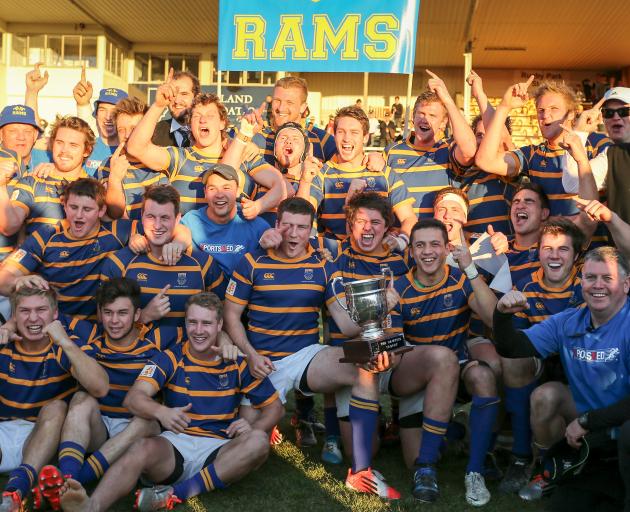 Ben Blair was on the coaching staff when Lincoln University won Christchurch's Metro Premier title in 2015 and now is trying to beat them as coach of Marist Albion. Photo: Getty Images
Former All Black fullback Ben Blair played in Marist Albion’s last Christchurch senior club rugby final 17 years ago, and now hopes to celebrate another memorable milestone in Sunday’s decider at Rugby Park.

So he is well aware of the challenge confronting a squad tasked with emulating the class of 2003, but believes a blend of youth and hard-headed veterans can upset the favourites.

Ageless hooker Rowan O’Gorman, who scored in the 2003 final, shares the role with Caleb Allison, to encapsulate the breadth of experience.

“That shows how long Rowan’s been around. He does our set piece as well, he’s sort of a player-coach.

While O’Gorman brings a ton of nous, Marist Albion’s rebuild has also been based on elite, overseas and young talent.

Blair, who coaches alongside Tom Wallace, said recruitment was key after they made the top six in 2019 but missed the semifinals.

“We’re lucky to have a lock from Australia, Jerry Lynch, who has been great for us this year," he said.

“The club managed to get a job for him. That’s what you’ve got to do to stay competitive in club rugby. You can’t sit back or you’ll just get rolled every year.

“You’ve got to try and be proactive and get some good players at your club, make your club attractive for players to come to.”

Blair was also rapt to benefit from Crusaders and new Canterbury wing Manasa Mataele’s return from a long-term knee injury.

“We were lucky enough to have Manasa for a few games for us. We had a couple of injuries so it was great to have his quality.

“He was willing to come and offer some good bits and pieces that he’s picked up from the top level, which was great for our squad.”

“He’s a special talent, he’s got that electric speed you need at the top level,” he said.

Captain and loose forward Declan McCormack and lock JJ Manning have also been solid alongside midfield rock Elliott Smith, who has played every minute of every game.

However, Blair acknowledged it would be tough to prevent Lincoln University atoning for last season’s climatic loss to HSOB after eliminating Sydenham last weekend.

“It’s their sixth final in a row, they are strong no doubt about that... just in the depth of players they have out there,” he said.