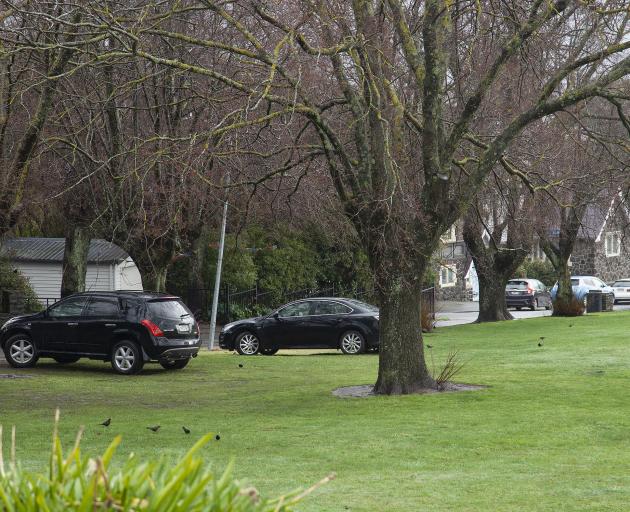 However, the company’s managing director Guy Mckee, who lives near the green, said his workers are no longer doing parking there.

“It’s a couple of parties, maybe two or three parties that are starting to take the preverbial to be honest, it’s out of hand. It’s completely eroding the grass on that side of the green.”

“What we need is maybe a consistent approach from the council to how we deal with people when they’re parking on reserves.”

Said city council manager of community parks Al Hardy:“Council staff have approached offenders to no longer park on the grass and continue monitoring of the site. If actions of the offenders persist enforcement has the capability to have vehicles towed.”

Mr Mckee said although his contractors used to park on the green, they no longer did.

“I just don’t see it being a massive deal. I mean when the [Cashmere Presbyterian] church has something on, there are cars parked all over the grass and I’ve seen other neighbours and bits and pieces park on it. I just kind of think that this (complainant) is just sort of clutching at straws . . . but they seem to pick on me and don’t address that there are a lot of other people that do park there, it’s not just us and we’re not ripping the grass up or anything like that.”

Cashmere Presbyterian Church minister Silvia Purdie said its visitors do park on the green during busy events, like funerals and weddings, as exactly where people are allowed to park is not obvious.

“We’ve obviously never encouraged people to park on the actual grass and it is a little unclear as to where the parking areas actually are . . . there’s no signage and there’s no paint and there are no bollards or anything so I do understand that people try to squeeze in there and we hope to not be inconvenient to the neighbours,” she said.

“If there’s an issue we would support the council putting in some bollards or some better, clearer direction for that, but certainly having industrial work vehicles parked up there is not helpful from our point of view.”