Christchurch puppeteers get their magic back 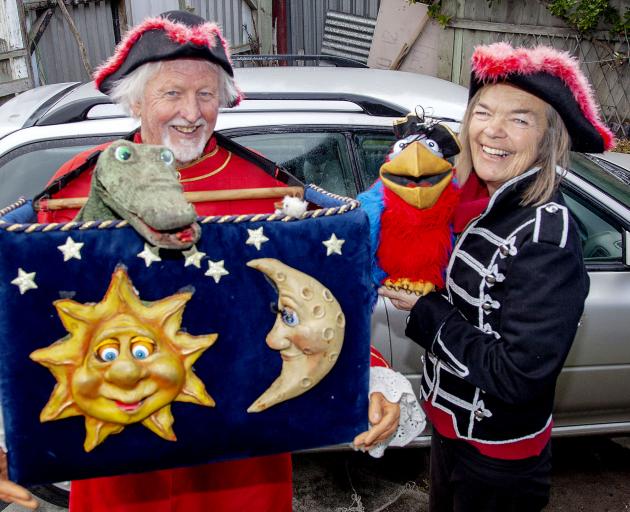 Veteran children’s entertainers Kerry and Mary McCammon have been reunited with their Subaru Impreza and their box full of irreplaceable puppets after they were stolen from the driveway at their home in New Brighton two weeks ago.

The Natural Magic Pirates appealed for help in Pegasus Post last week, hoping residents could help return the handmade magic box and puppets to the McCammons if found.

Their efforts led to a tip-off to police and an observant resident recognised the missing box when it was dumped in the backyard next door to them.

The McCammons have used the unique animal puppets to entertain children since 1983.

“It’s a huge relief, it’s why we publicised our loss. We never really gave up hope that we would find them,” said Mary.

“It happened really fast. Within a week we had our car and puppets back, so it’s really fantastic.”

The grey Subaru was found a few streets away from their Marine Pde home on Tovey St.

There was some damage and the petrol had been siphoned out, but there were still no puppets in sight.

Mary said the police told them a member of the public called about a suspicious vehicle that had been parked there for several days with no license plates.

Kerry then received a call on Sunday from a friend who lives on Union St to say the house next door had been burgled.

“We were about to begin one of our holiday shows when Kerry got a phone call from a local man who plays guitar with us sometimes,” Mary said.

“It turns out he and his wife live next door to an empty house that was on the market, full of furniture, to make it look nicer for buyers.”

The thieves helped themselves to most of the furniture inside.

But the alarm bells did not ring for their friend until they spoke to the real estate agents selling the house next door about what happened.

They said a box with puppets was also found in the garden.

“The newspaper (Pegasus Post) article, which the man’s wife had read, as well as the buzz on social media, led to this man knowing we had lost our puppets.”

Mary said since the good news broke, police have still not been able to locate the offenders.

When the puppets were found, she called the police in case the incidents were connected.

In the meantime, the puppeteers were grateful for the community’s support.

“Thank you so much to everyone who shared and commiserated with us . . . one friend even prayed to St Anthony,” Mary said.

“We are going to be super-careful from now on not to leave anything in the car overnight.”