0 Comments
The abandoned villa which caught fire in central Christchurch on Monday morning was featured in the Peter Jackson film Heavenly Creatures.

The blaze broke out in the top story of the Hereford St property shortly after 5.20am

A block of 20 flats had to be evacuated.

The exterior of the house was featured as the home of Pauline Parker in 'Heavenly Creatures'.

It was a frightening start to the morning for the neighbours of the villa.

Renae McEntee said they walked out to see flames coming from the building.

"It was quite scary to be honest, because there were so many apartments right next to it. It was like 'Are they going to catch on fire?' But they were fine, which was a relief."

Residents said no one lives at the property - but in the past it has had squatters.

At the height of the blaze there were five fire crews at the scene, including one operating an aerial appliance. 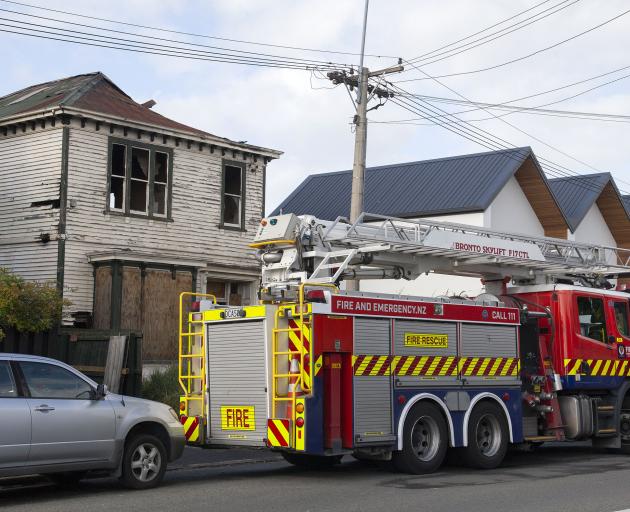 Photo: Geoff Sloan
Hereford St was closed to traffic between Barbadoes St and Fitzgerald Ave with motorists asked to use an alternative route.

Dunn said there was no one in the property when the fire broke out.

FINAL UPDATE: 7:50 AM
Hereford St has now REOPENED between Barbadoes St and Fitzgerald Ave after the earlier closure due to a fire. ^JPhttps://t.co/A27Y7aWljn

Fire crews brought the blaze under control on Monday morning and firefighting efforts were now being scaled back.

Police were also at the scene but at this stage they were not involved in the fire investigation, Dunn said.

She said they have not received any complaints in relation to the abandoned villa.

"Our current approach is if we receive a complaint then we will investigate. Our approach is reactive only.

"The council can only take action when it is a breach of legislation we enforce which is the building act and the housing act."