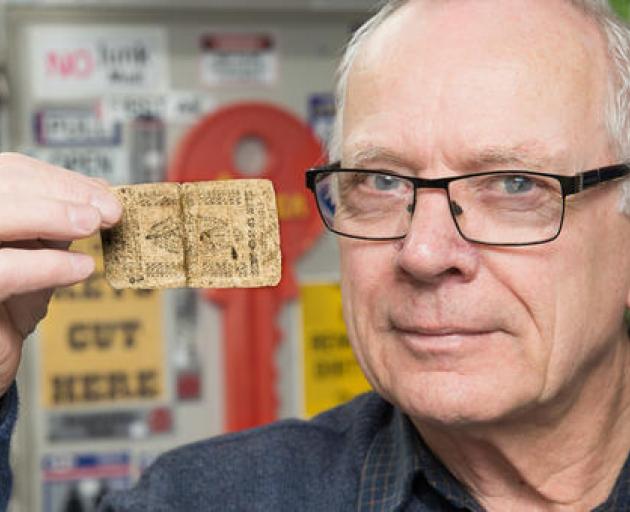 Dennis Shrimpton holds a 1738 United States bank note he brought off eBay. Written on it is 'death to counterfeits'. As an owner of a hardware store, Mr Shrimpton has had his own run-in with a customer attempting to use a fake note. Photo: Martin Hunter
Hundreds of counterfeit notes have been taken out of circulation in Canterbury – and more could still be out there.

The Reserve Bank has accounted for 470 fake notes with a face value of about $27,300 in the region since late March.

Since the beginning of the year, 12 people have been charged in conjunction with 41 offences of using or possessing fake bank notes in Canterbury.

Attempts have been made to use counterfeit notes in Christchurch, Selwyn district and North Canterbury.

The police organised crime unit is investigating the use of the fake notes, which are made of paper, tear easily, have visible imperfections and missing see-through windows.

Detective Senior Sergeant Joel Syme said there isn’t one particular group of people who are presenting the fake notes.

“Obviously we are investigating who is manufacturing and distributing it. That’s the focus of our investigation and that’s ongoing at the moment.”

He would not comment on whether those who had been charged were linked or knew each other.

With the unit being parts per million notes, New Zealand sits at 0.8, whereas the United Kingdom have 127 PPM, Australia 16 PPM and Canada 11 PPM.

Bars with pokie machines are also being hit by the fraudsters.

Often a person will try and get change for a counterfeit note, usually a $50 or a $100, then use this money on the pokie machines.

A staff member at The Craic Irish Bar in Riccarton was duped into accepting about $600 in fake notes, by a couple who claimed they were playing the pokies.

Similarly, Spreydon’s Celtic Arms Inn accepted $800 in fake notes from someone who was also playing the pokies.

The person exchanged eight $100 notes on a busy evening, which went unnoticed by staff.

The Bower Tavern in North New Brighton, the Embankment Tavern in Phillipstown and Opawa Challenge service station are a few of many businesses which have unknowingly accepted the fake notes.

On July 27, Home and Castle Hardware owner Dennis Shrimpton challenged a customer who attempted to use a $50 counterfeit note in his store.

The look and feel of the fake note gave it away to Mr Shrimpton who then challenged the woman to leave her name and number with him.

“I said: ‘You’re not going to do that though are you?’ This is going to the police; by the way you are on video, from which I can get good quality stills off.”

The woman’s whole demeanour was “totally unfazed” and “brazen,” he said.

The woman who didn’t leave her name or number tried to claim someone had given her the note when she sold her PlayStation earlier that morning.

“She was very upfront. She whipped $20 out of her pocket and said: ‘I’ve got some real money to pay for the item.’ With. . . reading her body language, she just does it as a matter of course, I deal with shoplifters here too and they just don’t care.”

Four stall holders were hit, some were hit twice, either by two people or they accepted two different counterfeit $50 notes.

Ms Baxendell said the woman targeted stalls that were busy, were run by older people and sold relatively low-cost items, to ensure they could get a lot of change.

In June, two men were charged with possessing more than $1000 of counterfeit notes.

Simon Darryl Bryant, 28, a fisherman of Nelson, and Isaac Vaughn Wilson, 29, a coach builder of Rakaia, were jointly charged with unlawful possession of 19 forged $50 notes, one $100 note, one $20 note, and a $5 note. Wilson is also charged with using a fake $50 note as if it were

genuine. The pair are next expected to appear in the district court on Tuesday.

Charges relating to the use, attempted use or possession of fake notes are treated very seriously, carrying a maximum penalty of seven years in prison.

The spate this year isn’t the first time in recent years that people in Canterbury have been charged with attempting to use fake notes.

In August 2013, Glenn Stephen Bielawski, 31, tried to pay for $65 of groceries with four forged banknotes at Westfield Riccarton Pak’n Save. He had photocopied the $20 notes.

Operation Bernhard undertaken by Nazi Germany was a plan to collapse the British economy during World War 2, by dropping fake notes over Britain.

The operation ended in 1942. However, it was revived later in the year with the aim of forging money to finance German intelligence operations.

Between 132.6 million – 300 million British pounds was forged, some of which was used to pay agents and obtain British secrets.

Labelled one of Britain’s biggest forgers Arnaouti, a 37-year-old Greek Cypriot created a gang which produced millions of pounds of fake British notes which they sold to criminals. In 2002, police raided a workshop and linked him to the scheme.

Also known as Edward Mueller, the counterfeiter of US$1 bills eluded the US Secret Service from 1938-1948. He used 10-12 homemade fake bills a week in Manhattan, never repeating the same store.

One batch even included a typo ‘Wasihngton.’

His operation ended in 1948 after a fire in his apartment building. Juettner threw out some fake notes onto the street. Snow hid them but when spring arrived children found the notes and handed them in to police.

Once arrested, he said had never given more than one bill to anyone, so no person had lost more than $1. He was sentenced to one year and one day in prison, and a $1 fine. He sold the rights to his story and an award-winning comedy film was made.