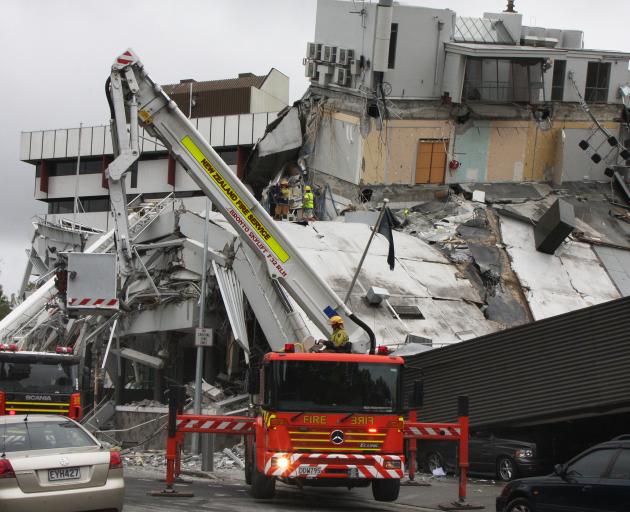 Firefighters at the PGC building, February 22, 2011 Earthquake. PHOTO: GEOFF SLOAN
Gary Duncan has seen a lot in his 35-year career as a firefighter.

But attending a job where a talented and promising young man took his life is something that “really knocked” the father-of-two.

“Suicide seems to be growing exponentially and I’ve seen lots of that . . . from the outside their lives seem perfect and that’s one of the hardest parts is when we experience death or injury in young people because they haven’t lived . . . especially when you have a young family, it really knocks you. It’s happened a lot with the extra ambulance work we have been doing over the last three or four years,” he said.

An increase in attending ‘purple calls’ which are life-threatening situations, has taken a mental toll on firefighters, Mr Duncan says and he is no stranger to the issue.

Two years ago, his former colleague committed suicide. He was in his late 50s with a wife and two children, about to move into a new home.

“I started in the fire service with him. He was an exceptional man . . . no one knows why; he never asked for help. That’s the hardest thing, men don’t ask for help, they don’t know how to ask.

Previously, Mr Duncan said he would try and protect my family and not tell them the things he saw on the job.

“I would just bottle it up. But the cup overflows and you see that with a lot of the guys. They might drink too much, or it will manifest in other ways.

Attending suicides has become the norm for firefighters in Christchurch, but “it doesn’t get any easier,” Mr Duncan said.

The trauma of dealing with family members during life-threatening situations is also difficult.

“To put it simply, a fireman rolls up, puts out a fire or breaks open a car. Whereas with purple calls, you show up, the family is screaming, their family member may have had a heart attack and they’ve seen it happen .

“We weren’t trained enough to deal with it . . . we could go to cot deaths or chokings and as you can understand, the mothers are just screaming. Guys with small children and older guys with grandchildren, it can be quite traumatic . . . I think in some guys’ minds, that gives them a really hard time.”

While there are debriefs to talk about what was experienced, Mr Duncan said a lot of men still don’t know how to channel the emotional nature of the job.

The veteran who started in the industry at age 24 admits he didn’t seek out FENZ’s well-being services available until after the February 22, 2011, earthquakes.

On the day of the earthquake, his wife was away and the father-of-two had to drop his five and seven-year-old children off at a friend’s house, before heading back to work.

He didn’t see them again for three days.

He called the tragedy “the straw that broke the camel’s back” in his career.

“With the earthquakes, with the things we saw, you would see those things sporadically, but not on a huge scale as we did and having to leave our own families at the time . . . afterwards, the amount of guys that were getting assistance because of the trauma they had been through, it was like one-third to two-thirds of the entire staff.

“Ultimately, loss of life doesn’t really come into it, you don’t really think about your own mortality, but in that situation, you thought about it a lot,” he said.

Firefighters in Christchurch are now able to get help from the country’s only welfare support officer, Jim Ryburn, who operates in the region.

But, Mr Duncan says a “clone” of Mr Ryburn needs to be made in each region around the country.

“He got so many guys the help they needed, without them having to ask too much . . . he would act as a middleman and make sure those people had what they need . . . Jim is exceptional, but he’s the only person in the country who does this.’’