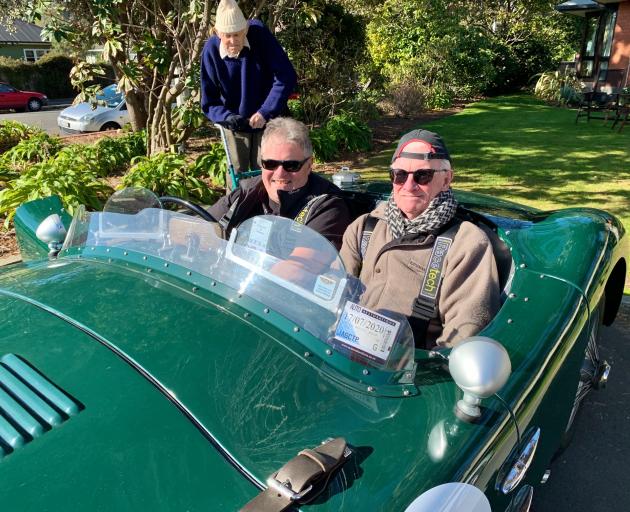 Edith Cavell Lifecare and Village resident Denis Stanton was taken for a drive in a classic Jaguar C-Type by Craig Pidgeon. ​Photo: Supplied
A former race car driver took a ride down memory lane when a Jaguar C-Type visited his retirement village in Sumner.

Denis Stanton, who lives at Edith Cavell Lifecare and Village, was able to relive his racing days when Craig Pidgeon, the son of one of Stanton’s race car partners, took him for a spin.

In his heyday, the 81-year-old drove race cars, including an Austin A35, an Austin A40 Farina and a Ford Anglia, at race tracks throughout New Zealand.

He was one of the first people to drive on Ruapuna Raceway in Templeton when it opened in 1963.

“I raced at Ruapuna, Wigram, the track in Blenheim, the one in Timaru, and Waimate.

“It was just a hobby. My parents were dead against it, you know, they didn’t like me doing that sort of thing but, looking back on it, I think it kept me alive because I never had a smash.”

He said the ride around Sumner and Lyttleton took him back to his younger days.

“We drove over the hill to Lyttelton and around Summit Rd, which was rather nice actually,” he said.

He said Pidgeon kept to the speed limit for the duration of the journey.

The retirement village’s other residents were able to get a close up look at the classic race car.