By Emily Moorhouse
0 Comments
While most people throw away bottle top lids when they’re finished with them, a Christchurch man sees the value they hold, and collects every lid he can get his hands on.

Inside Chris Koch’s garage lies around a million bottle cap lids, waiting to be repurposed into art, jewellery, or his latest creation, Liddy Boards, which is being trialled at Riccarton Primary School.

Koch collects bottle lids from the community at the New Brighton Seaside Market and uses them to reduce plastic waste and raise awareness on how things can be recycled.

He moved to New Zealand from Germany eight years ago with his wife Vicky and they started their business Poly Lab NZ just before Covid hit.

“It’s almost like a Covid lockdown project ... we started with zero money so basically just in our free time,” he said.

Koch was inspired to start making items out of recycled bottle top lids by a group in Holland which started a precious plastic movement, recycling plastic in small quantities.

He was also frustrated with the amount of waste being produced after participating in beach clean ups around New Brighton.

Koch made his first Liddy Board for his five-year-old twins, Mateo and Rosalie, who just started school, as a way for them to practice counting.

However, they used it more for making patterns and pictures, leaving Koch to believe that it could be good for fine motor skills.

This gave him the idea to implement the boards into primary schools and donated one to the school to act as a test run.

Koch received a text from the librarian that said the pupils use it every single day, mostly playing imaginary games but also a lot of pattern making and conversations about throwing away bottle lids.

Koch said the feedback is encouraging and he thinks the boards could be beneficial for kids with special needs who may have a hard time concentrating and sitting still.

“It’s a calming activity for them and being creative and the kids start talking about recycling and bottle caps, it’s pretty cool,” he said. 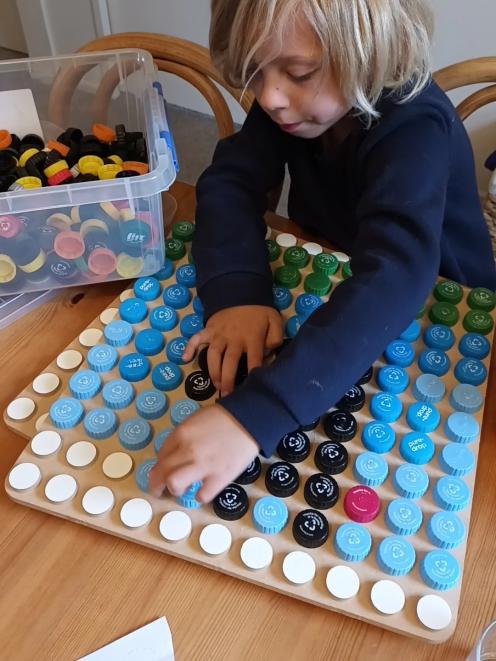 Chris Koch’s son Mateo uses the board to make patterns and pictures. Photo: Supplied
Koch makes the boards from wooden off-cuts he collects from joineries, putting it through a machine called a table top CNC router that shaves the board down, leaving small cylinders for the bottle lids to slip onto.

He makes the design of the boards using a computer program which then gets cut by a router in the machine, allowing for precise shapes that would be difficult to do by hand.

He started off with a small sandwich press, melting down the bottle top lids to shape into jewellery and art pieces but now has four large sandwich presses and always has two on the go.

“I don’t ever use any new materials when I make something, it’s recycled, reused, repurposed. It’s all about the circular economy – right.” he said. 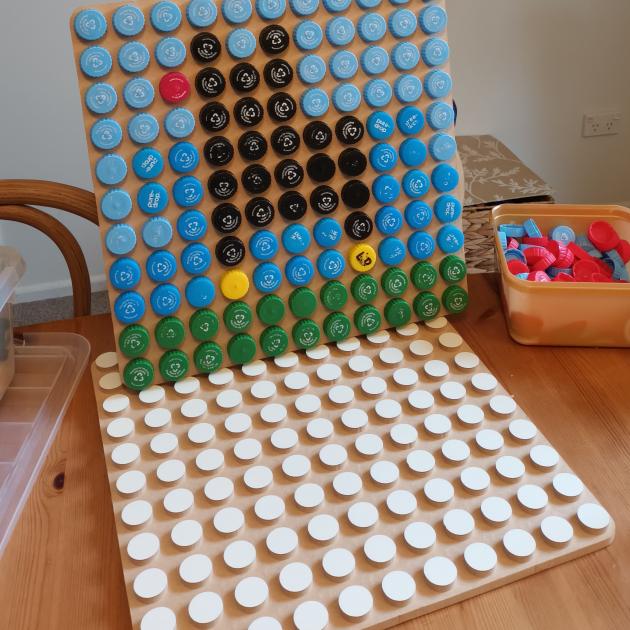 Photo: Supplied
“I believe we can do so much with all these amazing materials, it’s very high quality stuff they put out there, even the bottle lids, they’re food grade plastic and they’re only used once so there’s nothing wrong with it.”

Koch washes the bottle lids by putting them through a double cycle in the washing machine and uses about 150 for a board, depending on its size.

He said the feedback he’s received about the Liddy Boards so far has been “really encouraging” and he hopes to make more to start selling eventually.

“It gets me motivated to carry on and make more. At the moment we’ve all been a bit sick and inflation is rising and the Ukraine war and everything so it’s a bit of a weird time,” he said.

“Sometimes I’m a bit demotivated but then this kind of gets me going again.”