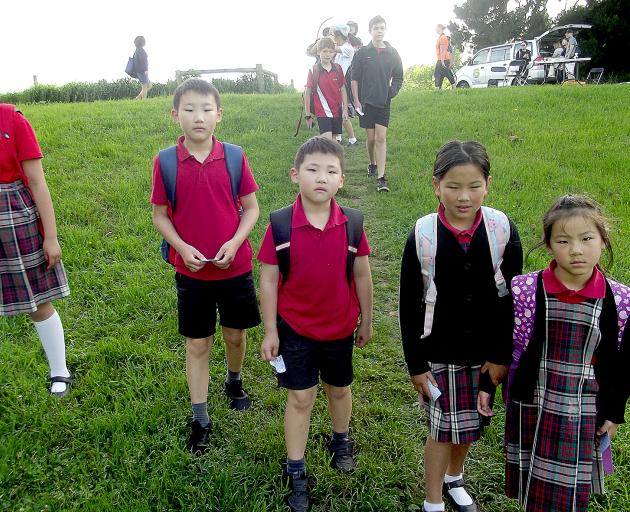 A group of pupils want a walking path built from the school to the Nga Puna Wai Sports Hub car park, where they now get dropped off and picked up in a bid to reduce congestion outside the school.

They have been working with Halswell Ward city councillor Anne Galloway to make the idea a reality.

On Friday, the pupils took part in a supervised trial walk along a marked out path to gauge interest in the idea. Cr Galloway said the trail was carried out to decide if a permanent pathway is needed.

She said getting to and from the school can be dangerous for both pedestrians and motorists.

“It’s a safety issue for everybody,” she said.

“It’s a safety issue for the parents trying to get in and out of the school because the exits and entrances to the school are straight onto Aidanfield Drive. Aidanfield Drive has become a through-way for people from Halswell Rd through to Wigram Rd, so people speed along there.

“People from all over the city drive to that school, so there’s going to be an issue always with cars unfortunately. It’s a very congested area, it’s got lots of entrances and exits. It’s quite a complex situation.”

“That could be an opportunity for that dangerous situation to be remediated along Aidanfield Drive.”

Principal Mark Richardson said a permanent pathway would get vehicles off the road and pupils moving.

“There’s a lot of traffic as with any school, and it’s just looking at providing parents alternative ways of getting there and particularly in the warmer months. There are some great opportunities to get out and walk and be active,” he said.

“Anything that gets kids off of screens and active is really powerful as well.”