Plaques of friendship between Christchurch and Japan stolen from quarry 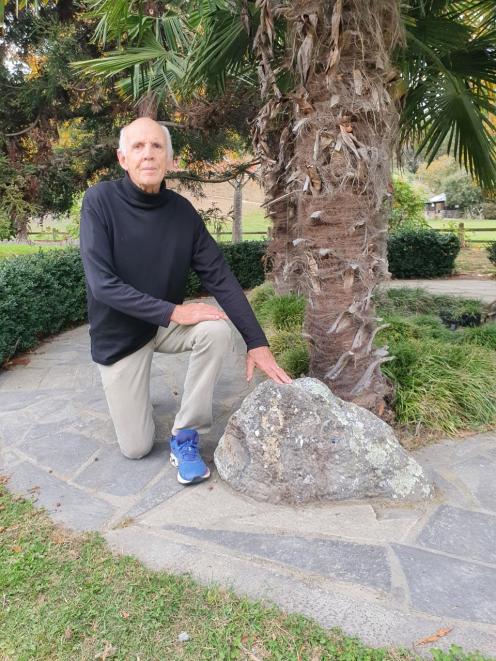 David Bolam-Smith at the site of a removed plaque. Photo: Supplied
Two plaques at Halswell Quarry have gone missing, leaving the keepers of the garden feeling frustrated and confused.

The Canterbury Japanese Society and Christchurch Kurashiki Sister City committee members noticed two plaques had been taken from the Kurashiki Garden when they were completing their monthly working bee.

The first plaque, which was secured to a rock, represents the 40th anniversary of the relationship between Christchurch and Japan.

The second plaque was donated to the gardens and installed onto a shade house used by people working in the gardens to rest in.

Christchurch Kurashiki Sister City committee member David Bolam-Smith said it was devastating to see the plaques were missing, as they represented the friendship between the committee and Japan.

“It must have been quite an effort, it was secured to a rock,” Bolam-Smith said.

He said it was frustrating as committee members had spent a lot of volunteer hours making the gardens look nice.

Canterbury Japanese Society and Christchurch Kurashiki Sister City committee members saw the plaques were missing during a monthly working bee in the Kurashiki Garden.
Bolam-Smith, who looks after the garden with a ranger, said the 40th anniversary plaque cost just under $2000 to make and install.

He said he has contacted Christchurch City Council about reporting the missing plaques to police and hopes someone will return them.