Sir Richard Hadlee is fronting an urgent appeal to raise the final $1.6 million needed to complete an indoor training facility at Hagley Oval.

The multipurpose Sir Richard Hadlee Sports Centre is already under construction and, all up, it will cost close to $5 million to build.

Sir Richard's trust donated $800,000 to the facility that will have five international standard 3.6-metre-wide cricket lanes with a 20m run-up for the bowler. 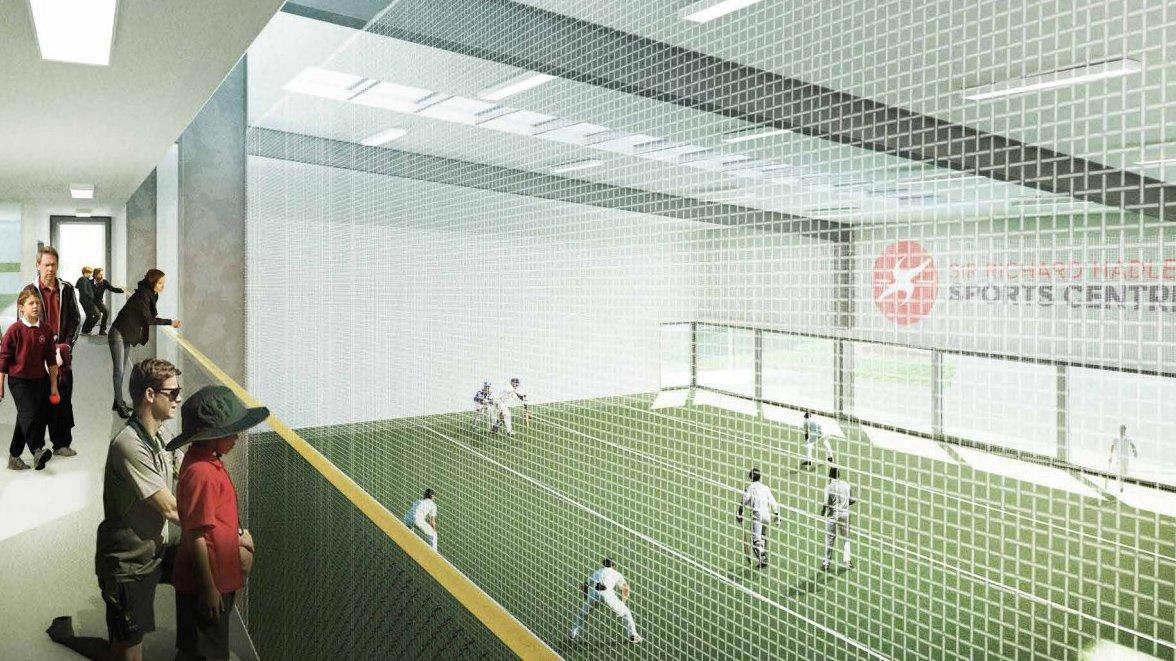 An artist's impression of the finished Sir Richard Hadlee Sports Centre. Image: Newsline
When the nets are rolled back the space can be used for other sports including, hockey, netball and football.

It will be the first time there has been an indoor cricket training facility in the city since the Christchurch earthquakes.

"There is no other facility like this in the Christchurch area. You find that young cricketers have to go out to Lincoln which is about 30km away or they have to go out to Rangiora and even then they've got book those venues if they want to do some indoor training, so to have this facility where it is located is really important," Sir Richard said.

"It's for everybody, it's for boys, it's for girls, it's for schools, it's for clubs, it's for professional or for amateur people, anyone that wishes to use the facility."

CCT chairman Lee Robinson said the community must get behind the fundraising appeal.

"The centre will be a community asset where you, your children and your children's children can come to train, develop and aspire to be the next local and national sporting legends.

"This is the final piece for the Hagley Park cricket precinct - it's exciting to see it become reality."

The Hadlee name is already synonymous with Hagley Oval. The pavilion at the cricket ground is named after the family recognising the contribution of Sir Richard's father Walter and his brothers Barry and Dale to the game.

To have the sports centre is his own name made Sir Richard proud.

"It's recognition for my contribution to cricket not only in Canterbury but New Zealand and probably throughout the world, so it's a lovely accolade," the former fast bowler said.

Sir Richard played cricket for New Zealand for more than a decade and was the first player to reach 400 Test wickets.

He travelled twice to India, in 1976 and 1988, which is where the Black Caps will begin their World Test Championship defence against India on Thursday.

"Conditions there were very tough on the field, the hotels, the food, the sickness you can get so trying to play cricket in that environment with the heat and the humidity and other things it was very very tough.

"Things have changed tremendously since I was there as a player, players enjoy going to India today because they've got outstanding facilities, the airports are magnificent, the hotels are five or six star hotels they get looked after very well and they have very few health issues.

"But two things that will be consistent from when I played to today and that is they type of pitches they're going to play on and certainly the weather conditions with the heat and humidity that is so energy sapping.

"The pitches will certainly favour the home side and India is blessed with some absolutely magnificent players in batting, in fast bowling and in spin bowling so they've got every area of the game covered so the type of pitch they produce I have a hunch it could spin a lot and our batsmen could find it very difficult coming to terms with pitch and playing conditions.

Sir Richard said the Black Caps would face a challenge especially after defeating India in the World Test Championship final in June.

"India will be out to prove a point. They've done that in the T20 format that's just finished, so they would want to make sure that they're going to try to clean up our boys.

"So our boys have got a huge challenge and we'll just see where we're at in the Test arena."