Using the power of music to help people 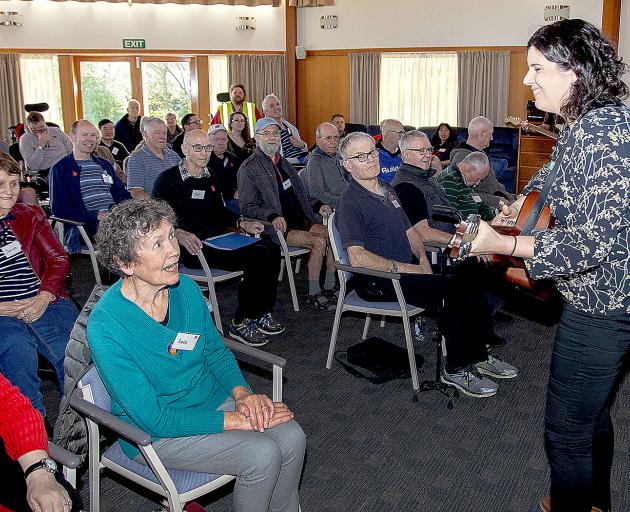 But Avonhead resident Kimberley Wade doesn’t want the treatment to be a “secret” anymore.

Eight years ago Mrs Wade, who runs her private practice Southern Music Therapy in Halswell, saw a gap for people with neurological conditions who wished to take part in community activities.

“I had a few clients that were in choirs that were no longer able to be in choirs. Their whole life had changed. If they are not coming to community things then they are isolated in their homes,” Mrs Wade said.

It is why she and speech therapist Susan McDonald, along with Therapy Professionals, established the Cantabrainers Choir.

The choir is now run by Mrs Wade and speech-language therapist Angela Reimer for people who have had a stroke, or have Parkinson’s disease, multiple sclerosis or a brain injury. It improves voice and communication through singing and socialising.

About 50 people are registered with the choir and about 35 attend the weekly meetings.

At each session, the choir is taught a range of music from modern to traditional. Members also write their own music to stimulate the brain.

“Music is processed in many areas of the brain. It is a really fantastic tool for people with brain injuries,” Mrs Wade said.

She said a huge amount of work goes into operating the choir, which is why the Cantabrainers Choir Trust was set up this year.

She is helping to share the positive effects of music therapy with as many people as possible.

“I work with people with neurological conditions and I come across people every week who have no idea what music therapy is,” she said.

Two weeks ago, Mrs Wade, a senior registered music therapist, organised an open day for her rehabilitative group, the Cantabrainers Choir, one of the only therapeutic choirs in New Zealand.

As part of the day, the public was given a brief description of what music therapy is and the choir performed songs, including some of its own compositions.

The choir also celebrated the launch of a short film on neurological choirs, which it feature in with the SoundsWell Singers.

It aims to get more funding to ensure a sustainable environment for choir members.

While the choir’s main goal is participation, due to demand from within, it has done several public performances with a Christmas concert coming up in December.

•The choir meets every Wednesday at the Mary Potter Community Centre from 10am-11.45am. To view its latest film, go to www.smt.nz/