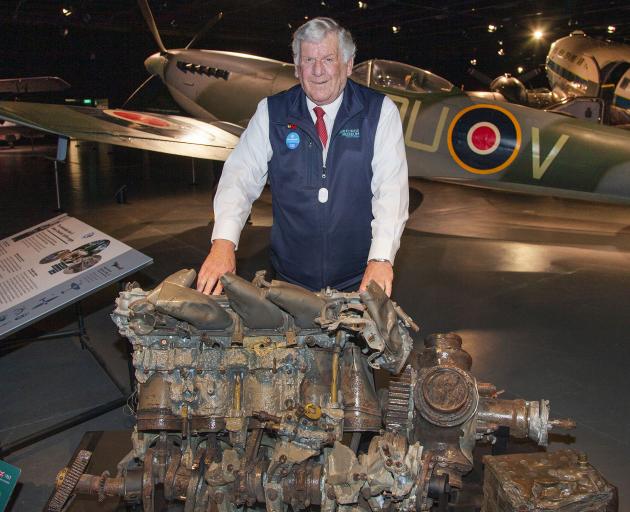 Chris Checketts with the Rolls-Royce Merlin engine from his father’s Spitfire that was shot down over Northern France during World War 2. Photo: Geoff Sloan
His spitfire shot down by enemy fire, World War 2 fighter pilot Johnny Checketts managed to escape the burning aircraft, parachuting into a field in German-occupied France.

The New Zealander was picked up by the French resistance, who treated his burns before helping him escape back to England across the channel in a fishing boat. However, the engine of his Mark IXB Spitfire lay buried in a field for more than 70 years.

It is now on display at the Air Force Museum of New Zealand on Harvard Ave, Wigram, where the story behind it makes it a favourite exhibit for volunteer Chris Checketts.

The engine from his father’s aircraft was recovered by a French farmer who unexpectedly offered it to him.

“Dad shot down 13 German aircraft in it, which makes that the second highest-scoring Spitfire ever built.” 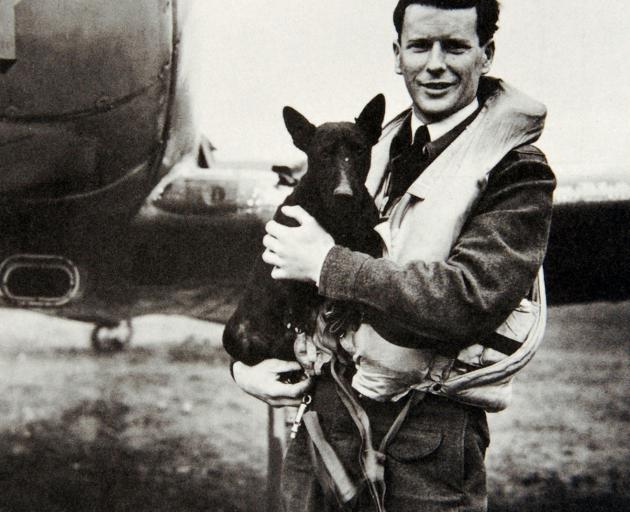 Johnny Checketts after returning from a mission in 1942. Photo: Supplied
Sharing stories with museum-goers was an important part of his role, he said

“We’ve got over a million items in the collection, so there are a million stories,” he said.

“I really enjoy telling the stories . . . given my father’s service history, there’s lots of stories of his that I tend to tell.”

He especially enjoyed seeing how children reacted to those wartime tales.

Bucking the stereotype of boys and their toys, it tended to be girls who asked the best questions, he said. 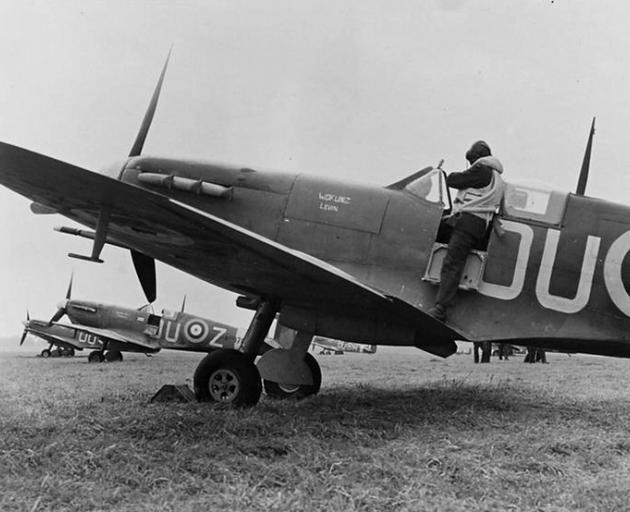 Spitfires of 485 (RNZAF) Squadron RAF, England. Photo: Supplied
He hoped they in turn would remember the stories and pass them on so the history stayed alive in future generations.

Other stories he told were also based on his items of his fathers, such as papers, paintings and his service medals.

A Distinguished Service Order, the highest-ranked commonwealth medal was among these, as was the American Silver Star medal.

“He’s the only New Zealander to have been awarded the American Silver Star, which is the highest decoration the American government can give to a foreigner.”

“His squadron escorted American bombers on 60 different occasions and they never lost one bomber.”

In Chris’ childhood, his father was close-mouthed about his wartime experiences but opened up as he grew older.

“Initially, he was very quiet about what he had done. He was a very humble man, very quietly spoken.”

The ‘Moth Doctors’ at RNZAF Base Wigram in 1988. Vic Braggins, Bob Swadel, Ian Tilson, Spencer Barnard, Jim Williams, Jim Grant and Johnny Checketts. Photo: Supplied
The museum is on the site of the former Wigram air base, which had been a part of his life from the beginning, 73 years ago.

“I was born basically here. We lived in a house just around the corner, right by the officer’s mess.”

Planes seemed a standard part of life when he was young, he said.

“Most people had a car in the garage, we seemed to have an plane in the shed out back.” 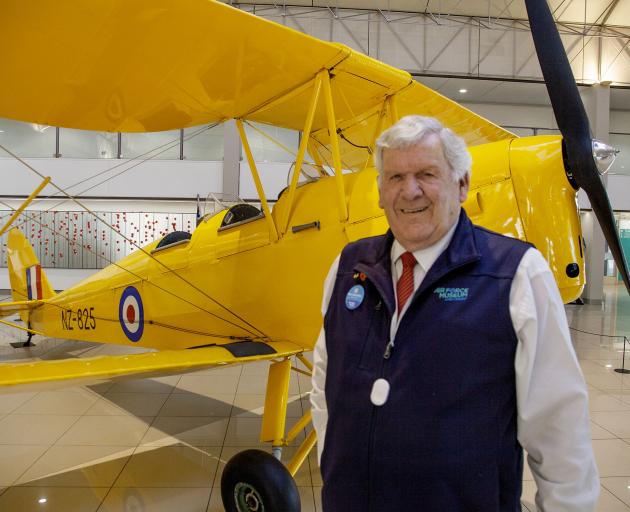 Chris Checketts with the Tiger Moth rebuilt by his father and other volunteers. Photo: Geoff Sloan
Wanting to follow his own career path, he shunned the Air Force in favour of commerce after leaving school.

“Dad, and mum, said that one member of the family in service was enough. No one else in the family has been involved in aviation at all.”

Wigram stayed a significant part of his life, he said.

It was a favourite haunt of his father’s, who worked on repairing the Tiger Moth in its collection, and was himself a volunteer until his death in 2006, aged 94.

Living within 1500m of the house he grew up in, he spent all day at the museum every Wednesday. 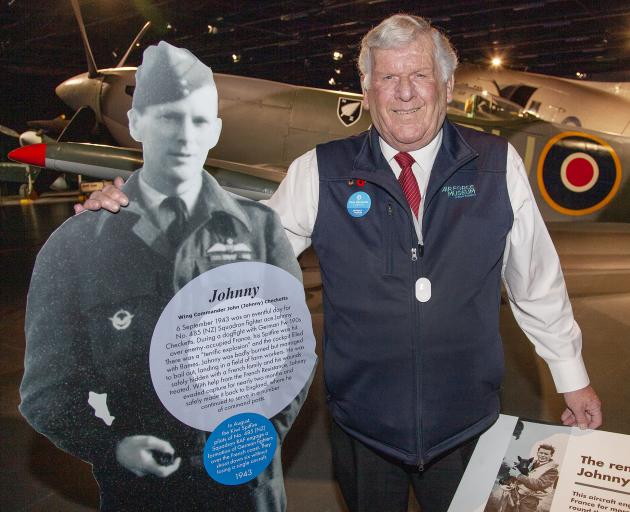 Chris Checketts with a cut out figure of his dad Johnny. Photo: Geoff Sloan
The collection has grown in the 24 years since the museum opened, due to the contributions of both the air force, which owned the museum, and ordinary people who donated items of interest.

The museum was a place to remember the history of the Royal New Zealand Air Force, he said.

“This is a place of not only aeroplanes and exhibits, it’s a place of remembrance where we acknowledge those who have sacrificed.”

He made a point of showing visitors the wall of names of those who had lost their lives.

Volunteering was a great way to meet people, and learn from them even as they learned from him.

“You meet people from all ages and walks of life, and until Covid, all countries of the world.”

While the pandemic had impacted visitor numbers, plenty of New Zealanders remained interested in the museum.