Young mum’s determined cancer message: ‘It is not my time’ 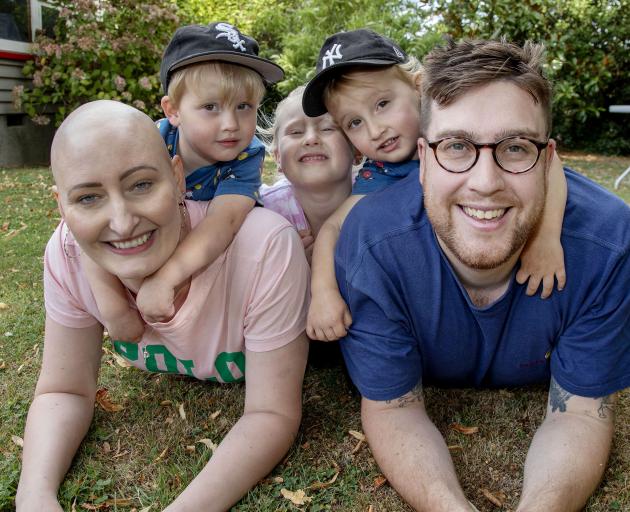 Anne Bay with husband Ben and children Paisley (middle) and twins Ralphie (left) and Knoxie. Photo: Geoff Sloan
“I always said I was going to see my daughter get married, even if they had to chop the cancer out of me, bit by bit and I just had enough to survive and they had to roll me out with just my head, I would see her get married, no matter what.”

These are the determined words of Anne Bay who has been battling incurable cancer for five years.

A year ago she found out her stage three breast cancer had metastasised to her brain and she was told she had just six months to live.

Almost 12 months later, Anne received her big miracle. Her doctors told her all the cancer was gone.

It took four doctors before Anne believed them.

“I feel incredibly blessed and incredibly grateful for all the support and love I have received. It has probably been what has healed me,” she said. 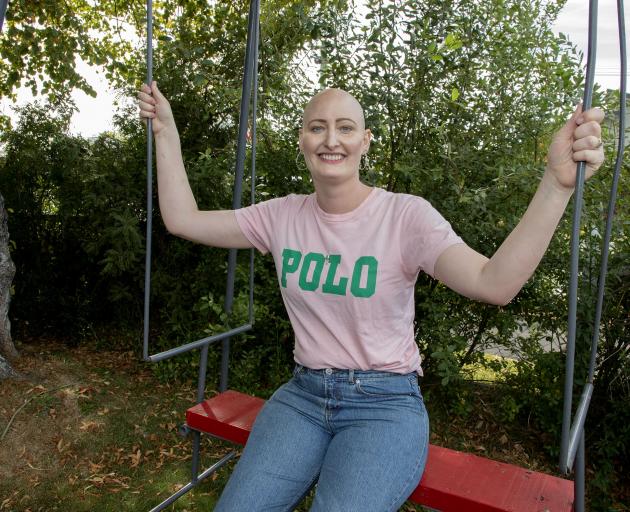 Anne Bay. Photo: Geoff Sloan
Doctors say they expect the cancer will return. But the mother of three young children is 100 per cent committed to “healing”.

“If I have to deal with cancer again, I will. But I’d prefer not,” she said.

After being told her cancer had gone Paisley, her six-year-old daughter shouted out: “My mum is brain cancer-free! Yay!” all day.

Paisley, was 13-months-old when Anne first found the lump in her right breast. Anne thought it was normal as she was breastfeeding and assumed her ducts were blocked.

However, the lump did not go away, it grew to 8cm.

On March 13, 2016, then 29, Anne was first diagnosed with breast cancer. She said she was too young and too healthy for cancer.

Anne immediately started to work on healing herself. Pairing diet changes with detoxes and supplements, infrared saunas and cannabis oil. Anne hoped to shrink the growth of her cancer.

Still in the middle of breastfeeding, Anne had a month to wean Paisley before she went through a mastectomy in May that year. This removed the lump as well as several lymph nodes as the cancer had begun to spread.

“They wanted me to do chemotherapy straight away afterwards but I didn’t feel right about it. I asked for the percentages and the survival was not favourable.

“I thought, if that is all you’ve got to offer me, then I’ve got to figure out a way to survive this cancer, my daughter is only 13 months,” Anne said. 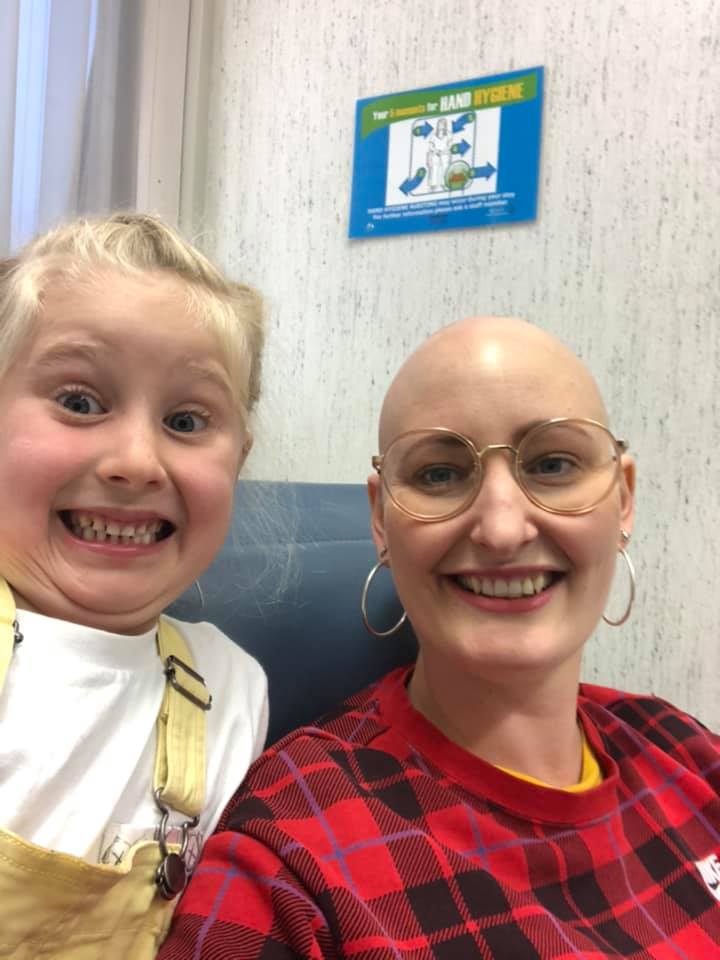 Anne with her ecstatically happy daughter Paisley, after Anne was told the cancer in her brain has gone. Photo: Supplied
Anne and her family have been putting remarkable amounts of effort into researching treatment options that can help heal her.

She completed a Research Genetic Cancer test, which assesses what types of cancer treatment will be most effective for that specific person and their specific cancer.

Anne also went to the Hoxsey Biomedical Centre in Mexico three times, a clinic which has been treating patients with cancer for more than 100 years.

Ben, her husband, said: “The medical system here focuses on the treatments we have available yet there are so many other legit options out there. But because they are outside the realm of what oncologists can offer, there’s a lack of research and resources available to help you understand it all.”

Anne said: “I knew with the medical system and your health, you had to take control of it yourself. You cannot just leave it up to doctors or other people to be in charge of your health. It has to be you, doing the research and figuring out what you need.”

Eighteen months from her first diagnosis, Anne found out her cancer had metastasised and she had seven new localised tumours in her hip and pelvis, ranging in size from 5mm to 15mm.

She was told her cancer was incurable.

After this, at the beginning of 2018, she decided to begin chemotherapy and Anne was petrified.

“I really work on intuition and what my body needs. I’ve become very in tune with myself.”

The pain from treatments has been immense. Anne has experienced weeks of nausea, diarrhoea with bleeding haemorrhoids, flu symptoms and an aching body. Her skin became raw and itchy, and her mouth was often filled with ulcers. She lost all of her hair.

“The treatment for cancer is so hard on your body. It is a balance between killing the cancer and yourself,” she said.

After seven weeks of chemo, at the end of 2018, Anne was told by doctors there was no cancer they could see.

Three and a half weeks after her last chemo session, Anne received her second miracle. She found out she was pregnant. With twins!

The couple had to decide whether to go ahead with the pregnancy, Anne’s body still immensely weak from chemotherapy. It was already extraordinary she was pregnant. Diagnosed with endometriosis as a teenager, she was told she would need to have children by 21. Yet along came her three children.

They had decided to go ahead with the pregnancy and Ralphie and Knoxie were born.

Anne had done everything she could to heal from her cancer. She had moved on with her life and was busy with motherhood. Ben was in his final year of a double degree at university.

But then she started experiencing headaches and visual disturbances.

After just finishing breast feeding, in March 2020, Anne was diganosed with brain cancer, three tumours growing in her brain which had metastasised from her original breast cancer.

“I turned around to my husband when I heard the news and said: ‘No. I’ve got brain cancer! No’ I felt so shocked but I was not surprised.”

In May, she had invasive brain surgery to remove the tumours, and started radiotherapy.

“After being told I had brain cancer, for the next two weeks I watched copious amounts of people healing from crazy things and I thought, if they can do it, I can heal too.

“I’ve indoctrinated myself that healing is easy and very doable. The power of the mind is incredible.”

But more cancer spread through the protective membrane in her brain.

“One night after an MRI, I lost my cognitive ability. I couldn’t read or write, I didn’t even know Knoxie’s name. I felt so scared,” she said.

They went straight to the emergency department and that was when they got the devastating prognosis.

The oncologist told her she had six months to live. The cancer was spreading too quickly.

“I thought no, I am too healthy, I am too well, my spirit is too strong and alive to die. I am too committed to healing.” 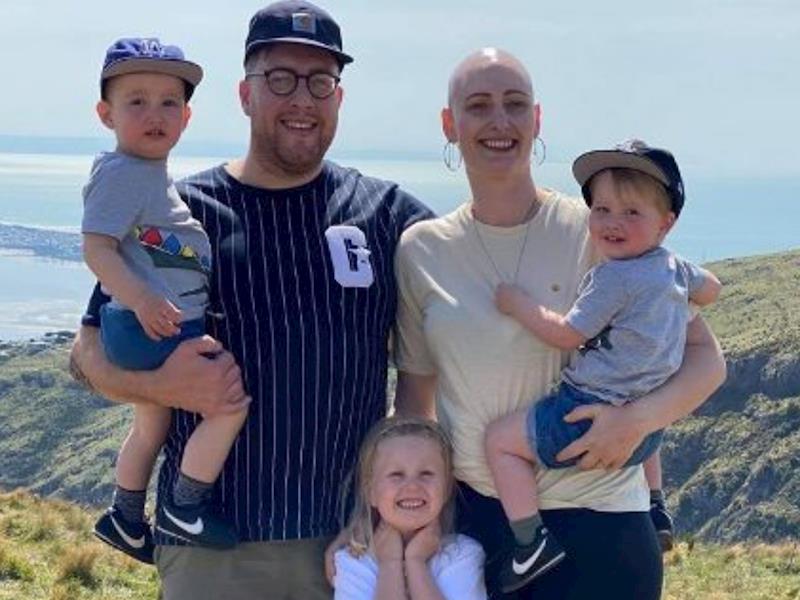 Anne and family. Photo: Supplied
Anne had not even made a will, so determined to heal, but with this final blow, she thought she would have to finally prepare for her death.

“Leaving your young children is so hard. How do you even prepare them?” she said.

Anne would often tell Paisley: “We never know when people will die. People can die suddenly and that’s why we just value and love the people in our life while we can.”

She said: “When I hug my children I don’t think about losing them as I don’t want to pass that fear through to them, I try and keep myself in a place of pure love.”

Yet even after receiving her death sentence, Anne was still 100 per cent committed to healing.

She said: “I don’t like the word fighting, it’s a battle word. I feel with cancer it is healing you’ve got to do.”

“My children have been 100 per cent my motivation.”

February 17, was the happiest of days for Anne and her family. She is healing.

Anne is hoping to write a book about her journey alongside starting an organisation that offers practical support and resources to others with cancer.

She is working to keep a positive mental space for the future, for both herself and the people around her. Anne is so busy with her children, it is hard to believe she even has time for cancer.

“But it’s my choice to either stay in bed and feel miserable or to get up and get going.

Each morning, Anne takes a deep breath, wipes away her tears from the pain, and chooses to have a positive day.

A Givealittle page has been started to help to pay for the IV Vitamin C and the other therapies Anne is using e.g. probiotics, ‘green shots’ (whole nutrition supplement), detox products, bilberry juice, Hoxsey treatment (Mexico), etc. Many of these are recommended by her doctor. These all cost about $2000 each month.