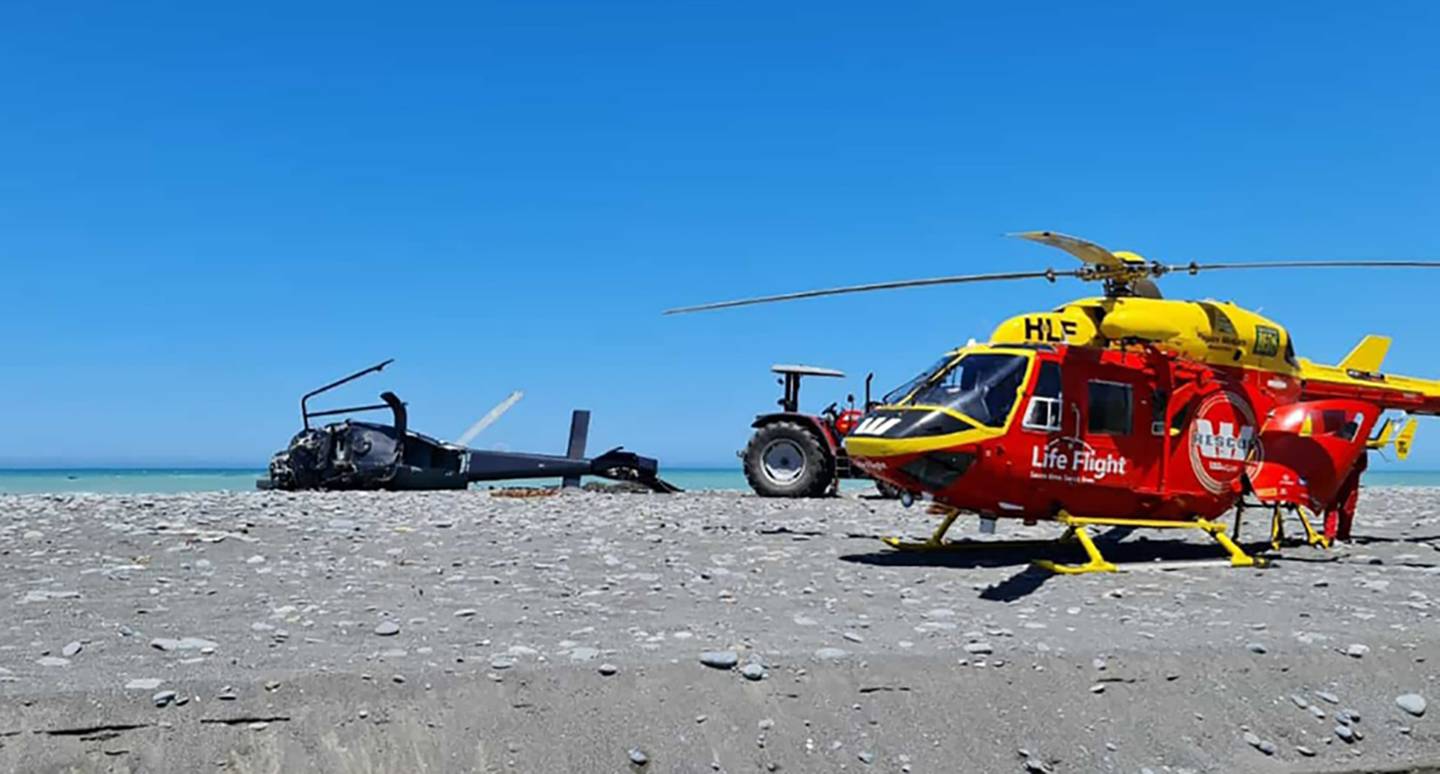 Three survivors of the crash were flown to Wellington Hospital for treatment. Photo: Supplied
Ian Mehrtens spent his 69th birthday pulling dead and wounded people from the wreckage of a helicopter crash across the road from his Kekerengu home - and there's one image that will stay with him forever.

"The wee dolly ... the little girl that was hurt, her doll was in the surf and I just picked it up," Mehrtens said.

"I carried the wee girl up the beach to where her mum was lying. She was asking me 'where's my mummy ... is my mummy alright?' and I said 'yeah she's alright', but she was far from it."

Two people were killed when the helicopter crashed on to the beach at about 12.40pm yesterday, and three children were badly injured.

Two adults are feared dead, with the children surviving the tragedy. It was reported yesterday that a family had flown north from Christchurch for an idyllic lunch.

Mehrtens and other locals rushed to the scene and began hauling the victims out, terrified the smoking wreckage would go up in flames at any moment.

He said the pilot was obviously dead and an adult woman was "not looking good". Three children were injured and pulled to safety, including a boy, and a teenage girl with broken legs.

Mehrtens and his wife Lyn own a lodge opposite the beach where the crash happened - in front of the Kekerengu Store and camp, 30km north of Kaikoura.

They were standing in the kitchen with a friend watching the helicopter land when suddenly, something went terribly wrong.

"It was just coming in to land and I thought he was putting on a display for the passengers, showing them how the helicopter worked," Mehrtens said."It started spinning ... then it just disappeared ... clunk ... bang. I thought, 'S**t, oh my God' - it just nosedived down and I thought, 'Crikey, they are going to need some help."

He jumped on his quad bike and headed to the beach, meeting his neighbour and mate - who asked not to be named in this story - on his tractor.

The helicopter had gone down in the water so the men - helped by locals, campers and tourists - tied a rope to the tail and dragged it from the surf on to the beach. 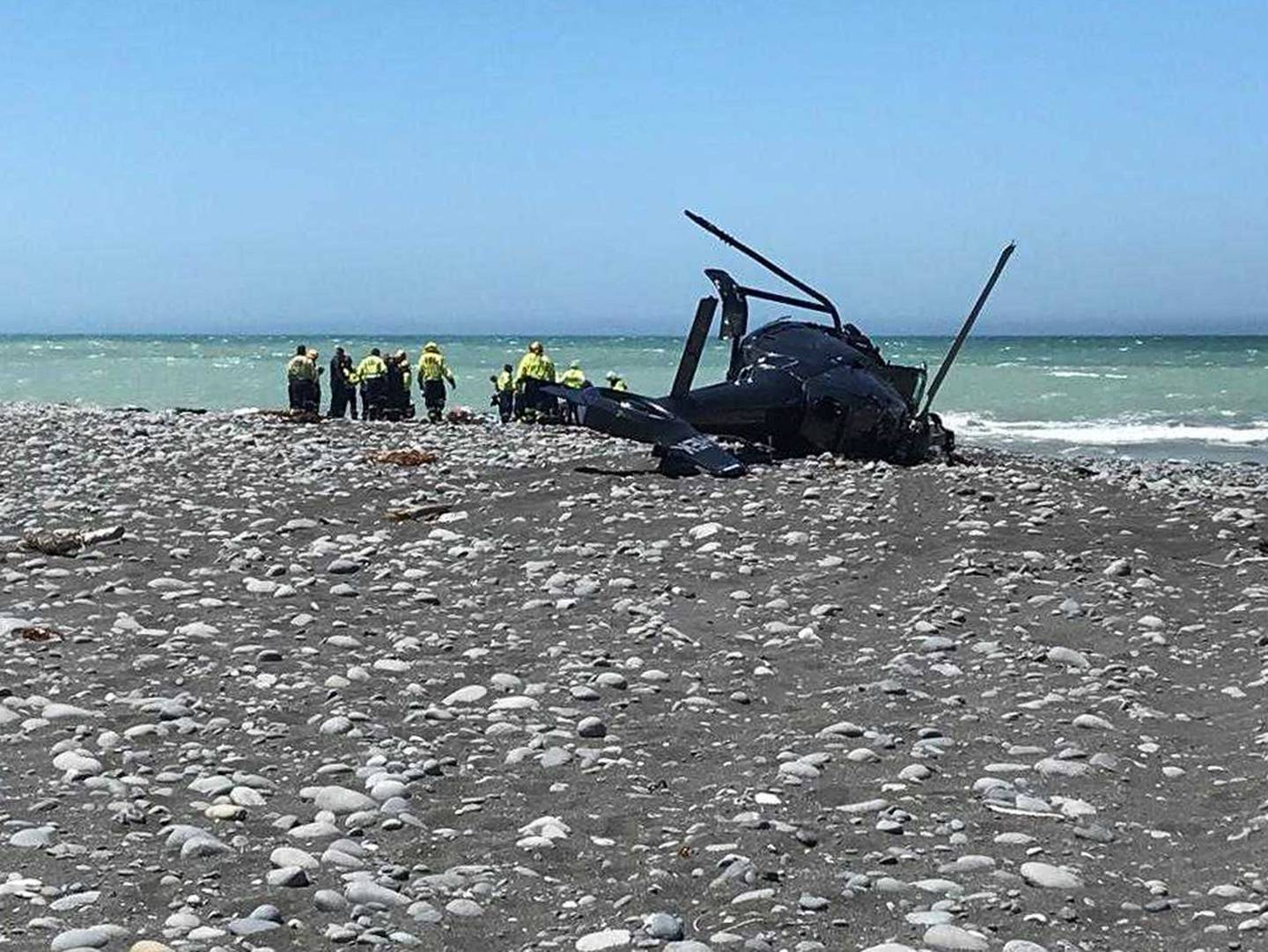 Two people were killed when the Airbus EC120 helicopter crashed onto the beach at Clarence, north of Kaikoura. Photo: Canterbury West Coast Air Rescue
Then they started frantically pulling people out.

They retrieved the pilot last, laying him on the beach and covering his face with a blanket - placing rocks around it so the coastal wind did not blow it away.

"I didn't want to see that," Mehrtens said.

"The poor bugger ... something must have gone really wrong."

"It just all of a sudden altered course ... there was a big crack and I thought maybe it landed on its runners and they were buggered, but no," Mehrtens recalled.

"[The kids] were screaming in pain ... The older girl, she wasn't good.

Mehrtens turned 69 yesterday and being part of a dramatic and tragic rescue was not part of his plan.

He has worked as a first responder for years, pulling people from wrecked and burning cars, but never anything like this.

But don't call him a hero.

"I'll never forget it ... the old instinct took over and I just went." 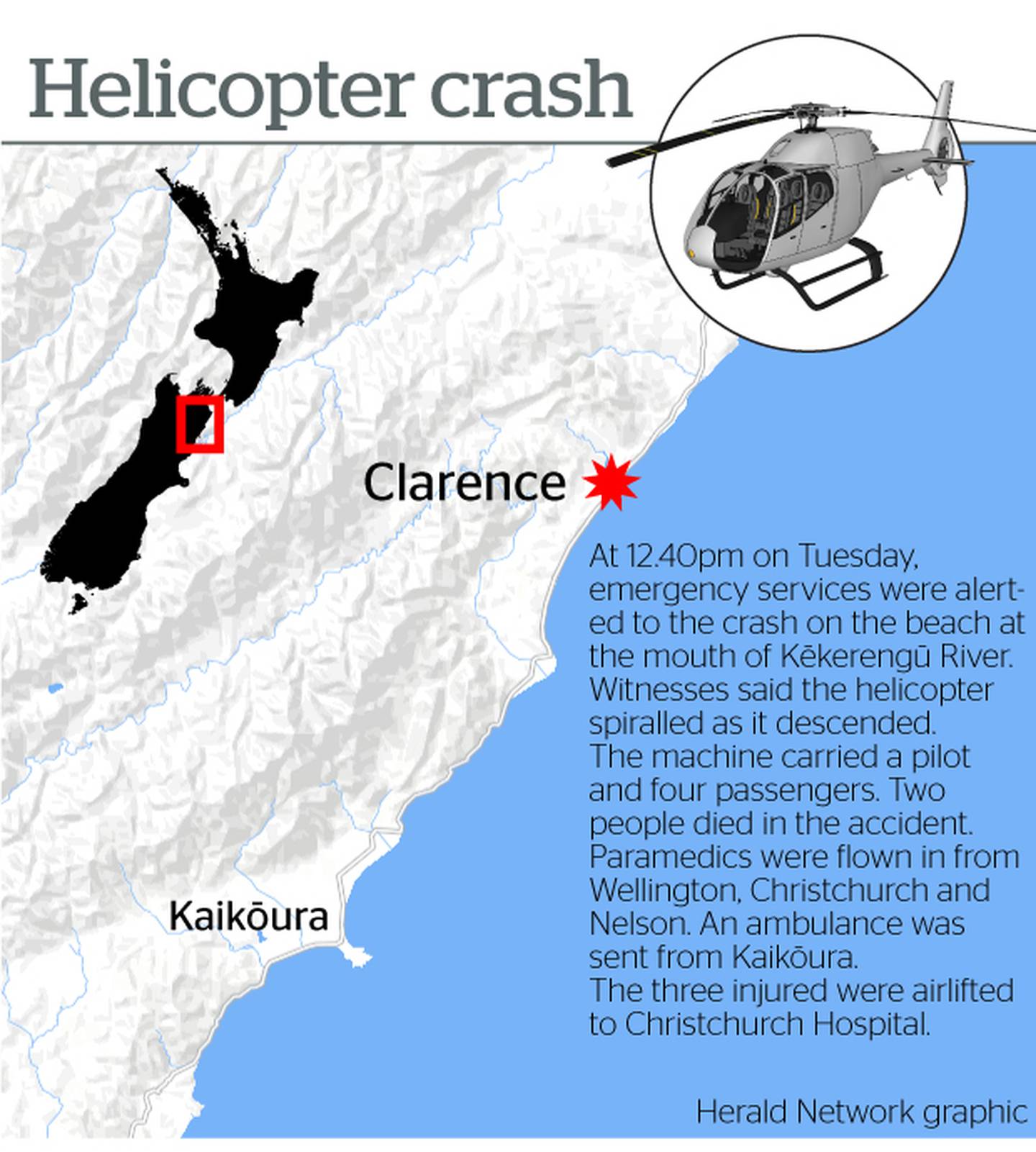 Lyn Mehrtens said she was proud of her husband and disagreed that he was not a hero.

"How many people did you pull out of that thing?

"I've never seen anything like it in my life."

The Transport Accident Investigation Commission (TAIC) has opened an inquiry into the accident, with three investigators to arrive at the scene this morning.

The helicopter was an Airbus Helicopters EC120 and is understood to have come from Christchurch.

Investigators will comb through the wreckage as they work to understand the circumstances that led to the crash.

Harald Hendel, TAIC's chief investigator of accidents, said there may be people who saw what happened, given the location of the accident adjacent to a busy café on State Highway 1.

He appealed for witnesses – "especially anyone who may have captured the accident on their vehicle's dashcam or other recording device - to please contact TAIC as soon as possible".

They have set up a perimeter around the wreckage prohibiting public access, in order to protect evidence.

"Their initial work will include inspecting the wreckage, mapping the site, and talking with witnesses. Further evidence gathering in coming weeks and months will likely include examining the helicopter's components, seeking any recorded data from the helicopter's electronics, and obtaining maintenance records."

Fire and Emergency New Zealand (Fenz) operational insurance team member Darryl Papesch was one of the first responders on the scene and said locals had pulled everyone out of the wreck by the time he arrived.

He confirmed the three survivors were children, who were flown to Wellington Hospital for treatment.

"We were having conversations with them, not a proper conversation but they knew their names and how old they were," Papesch said.

"All three agencies, Fenz, police, St John, all worked together and just got on with it."

A hearse arrived at the scene last night at dusk.

Mehrtens and his tractor-owning mate were having dinner together last night - a roast to mark the rescuer's birthday.

He was looking forward to a couple of beers but conceded they would probably spend much of the evening talking about the event.

"It's just the kids, that poor wee girl ... she was just distraught. I carried her about 20m up the beach and lay her with her mum. I think the mum must have been thrown out and someone put a blanket on her."

Another witness said the crash was "awful, just terrible".

She said it happened "out of the blue".

"I thought he might have been spinning around to slow it down but then - bang. Either something's gone really wrong with that helicopter or there's been something wrong with the pilot, a medical situation maybe."