Most quake-prone buildings in Mid Canterbury 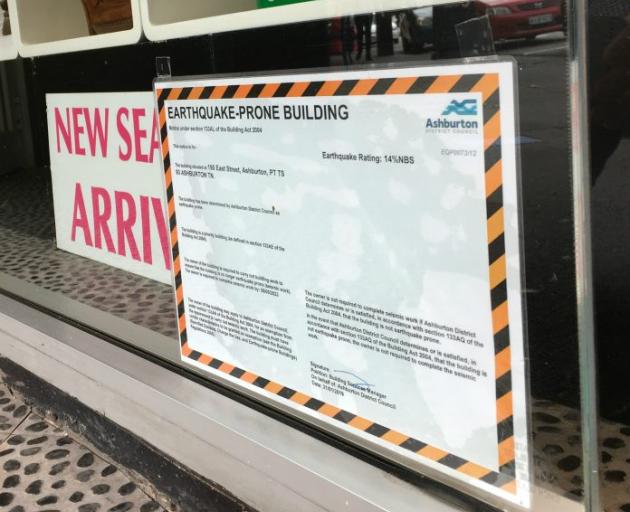 One of the placards displayed in a shop window along East St. Photo: Ashburton Courier
There are 92 buildings in Mid Canterbury that are earthquake-prone or potentially earthquake-prone and the majority are in central Ashburton.

Some 46 earthquake-prone buildings have deadlines set by which time they need to be strengthened. Ashburton District Council is working with the building owners to get the work completed by those deadlines.

Another 46 potentially earthquake-prone buildings have until early next year to provide assessment reports to council.

If reports are not received, the council can deem the buildings earthquake-prone and proceed as if they were and set deadlines to have them strengthened.

Property owners are required to display the placards in a prominent place in their building to help the community be aware of the status.

Council strategy and compliance manager Jane Donaldson said deadline dates for earthquake-prone buildings depended on when reports on them were received and under which legislation or policy was enforced at the time.

So far 365 buildings in the district have been assessed.

Fifty of those have been demolished, 64 strengthened and 159 have been deemed not earthquake-prone.

The Building Act 2004 requires territorial authorities to report to the Ministry of Business, Innovation and Employment on progress towards identifying potential earthquake-prone buildings.

Reporting is seen as a mechanism that provides New Zealanders with assurance that risks posed to public safety by existing buildings in the event of an earthquake are being identified and managed.

A building is defined as being earthquake-prone if it will have “its ultimate capacity exceeded in a moderate earthquake, and if it were to collapse, would do so in a way that is likely to cause injury or death to persons in or near the building or on any other property, or damage to any other property”.