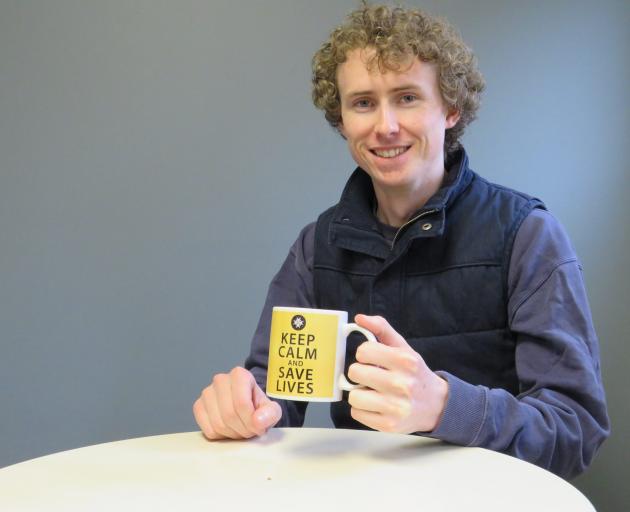 Simon O’Reilly. Photo: Ashburton Courier
Simon O’Reilly, 24, is gearing up for a new career after completing a Bachelor of Nursing degree at Ara.

The Canterbury St John patient transfer officer Simon O’Reilly is taking the next steps in his medical career.

He has just finished a Bachelor of Nursing study at Ara Institute of Canterbury in Christchurch, and is now hopeful of getting a placement in Mid Canterbury.

But he is open to possibilities.

He was interested in working at an emergency department or an acute admitting unit (AAU) like at Ashburton Hospital; he likes the variety those departments offered.

He has spent time during his training working at various placements around Canterbury, including at Rakaia Medical Centre, Princess Margaret Hospital and at Ashburton Hospital in Ward One and in the AAU.

By the end of the training, the goal was to work independently in a workplace rather than under instruction.

"It was great to be able to consolidate my learnings and put them together," he said of his final placement at the AAU.

His graduation is in Christchurch in September. However, the 24-year-old will sit his state final exams this month to become a registered nurse.

The exams are set by the Nursing Council of New Zealand and involve two 90-minute exams: One in the morning and one in the afternoon, covering everything, and anything, learned or topical in the medical world.

Simon, who hails from well-known harness racing stock - his dad Gerard O’Reilly and younger sister Sarah are both trainer/drivers is entering the field of medicine after his mother, Jane, who was once an enrolled nurse at Ashburton Hospital.

She did in-hospital training before it became degree training through learning institutes, he said.

Simon started with St John Youth when he was about 12, and has been invested in the organisation ever since.

At one point, paramedicine was on his radar as a career option in the early days but, after some discussion with his peers, training as a nurse was considered a better place to start his career.

It had been an eye opener.

An intake of around 80 to 120 students, had diminished in numbers during the three years as students dropped out or realised nursing was not the role for them.

It was better than others, he said.

He had worked and saved for two years prior to starting his study, and was able to fund the first two years of his training.

However, living away from the family home in Rakaia to a flat in Kaiapoi quickly ran up additional costs.

He thought other students may easily have loans of around $50,000 or more.

Simon initially started with six month, pre-health study through Ara, as he did not have university entrance levels, then went on to start the three-year degree.

He did eventually finish it in four years after taking a year off. During that time he worked at St John Ashburton.