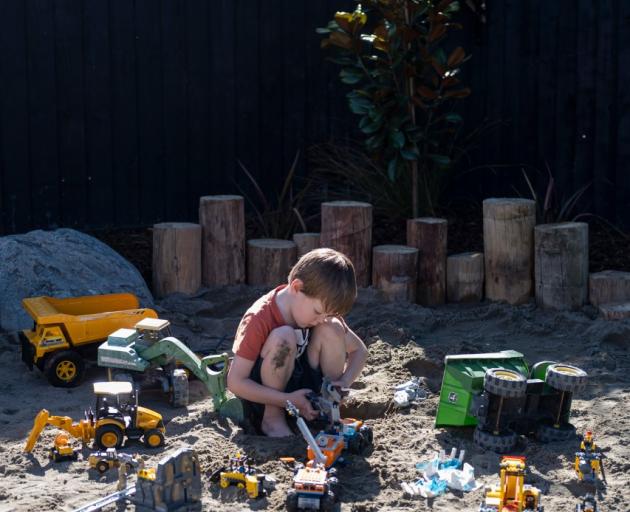 Seb Turner enjoying his new sandpit. Photo: Supplied
A $50,000 landscape project is bringing joy to a Canterbury five-year-old who has a rare blood condition.

Seb Turner suffers from aplastic anaemia, which leaves him fatigued and prone to infections.

The Lincoln youngster has been isolated for nine months, but hasn’t been able to play outdoors with his home backyard looking tired and forlorn.

Mother Caroline Yardley reached out to the Hell Pizza Satan’s Little Helper programme, which resulted in an article in NZ Landscaper magazine.

“The article about Seb really hit home, as I’ve got two boys myself,” Morgan said.

“I was immediately inspired to lend a hand.”

The landscapers transformed the yard at Seb Turner's home in Lincoln. Photo: Supplied
Designs were drawn up by Hayden Stark at Xteriorscapes, while Onlandscape’s Ollie Newman helped Morgan spearhead efforts to get other suppliers and experts on board.

“We sat down with Caroline and Seb to design a fun, open, playing space, and Seb was so excited by the prospect that he even had a few pointers for us, such as the sandpit and a nice open grass area,” Stark said.

“We developed some spaces for outdoor living and capturing the sun, and factored in a few practical and functional items like a raised vege garden.”

Yardley said her son was admitted into the child haematology and oncology clinic at Christchurch Hospital in 2019.

That night, he had a blood transfusion. The following morning, he had a platelet transfusion and a bone marrow biopsy under general anaesthetic.

Out of a global register of 36 million donors, there was no match available for a bone marrow or stem cell transplant, forcing Seb down the road of immunosuppressant therapy, which has severely compromised his immune system.

She said it was fantastic to see the garden area, featuring patches of scrub, weeds, a broken trampoline and an uninspiring area of clay soil, transformed with the landscape project.

The project commenced on October 4 and was completed in four days.