By Susan Sandys
0 Comments
Ram-raiders in a stolen ute caused thousands of dollars in damage at a dairy and garage.

The offenders failed to get into the cigarette cabinets at Lincoln Convenience Store and Kirwee Challenge, but made off with chocolate bars, milk and vaping products.

Police say it was the same trio, in the same Ford Courier flat deck ute, responsible for both incidents in the early hours of Monday last week.

Lincoln Convenience Store manager Rick Sun said the three offenders, which he believed to be male youths, reversed the ute between safety bollards outside to smash their way into the store, about 5am. Two of the young men then ran in and tried to smash open the cigarette cabinet with a hammer and crowbar.

When that didn’t work, they quickly grabbed chocolate bars, Cookie Time products and a 2-litre bottle of milk, leaving after about 20 seconds. 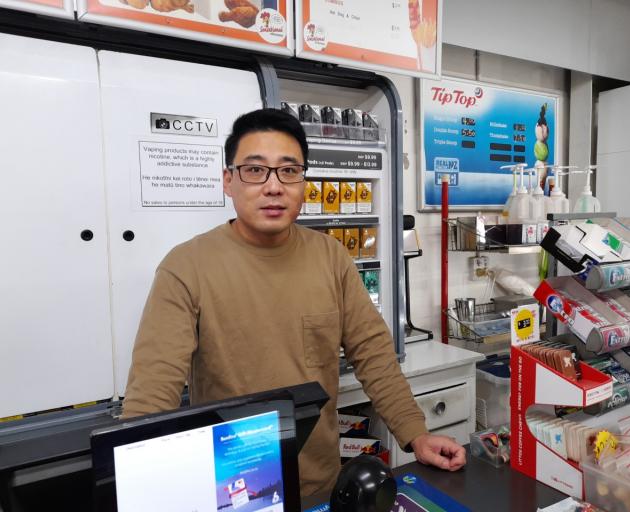 Lincoln Convenience Store manager Rick Sun is considering beefing up security following an early morning ram raid. Photo: John Cosgrove
Sun said his landlord would be replacing the smashed window, which is now boarded up. He believed the law needed to change to ensure more serious consequences for youths committing such crimes.

“Now materials are short, we will have to wait more than one month to get the window replaced, this makes me very annoyed,” Sun said.

He was considering extra security measures, such as a security sliding gate across the front of the store.

Kirwee Challenge manager Vanessa Moore told Stuff last week the offenders shattered a window to break in about 3.40am, before smashing up the cigarette cabinet, but failing to get it open.

The group instead stole other cigarette accessories, vape products and chocolate bars.

Senior Sergeant Anna Lloyd said it was the same vehicle and offenders involved in both incidents.

It followed an incident earlier in the month where three youths in a stolen Nissan Tiida used a hammer to smash into Prebbleton Dairy, quickly loading items into shopping bags once inside.

Lloyd said the age of the offenders in last week’s Lincoln and Kirwee incidents were unknown.

This was hard to determine due to clothing including hoods and masks concealing facial and other features. It could not be confirmed whether or not they were youths.

She urged anyone with information to come forward, believing the Lincoln incident in particular may have been heard by people in the area, or anyone seeing the Ford Courier driving in the area.

“It would have made quite a loud noise at that time of the morning,” Lloyd said of the raid.