By Susan Sandys
0 Comments
A man wearing a headlamp raced through the darkness, arriving as a shining light of rescue for a driver trapped in his vehicle.

Richard Steel of Brookside says he is not a hero, but “just your average Joe.”

Steel ran to the scene of a car crash on Wednesday night last week, from his garage where he had been working with a head lamp on.

“I heard the skid and the crunch,” Steel said.

“Within minutes the neighbours were behind me, calling the ambos.”

He saw a four-wheel-drive car on its driver’s side in a water race, with an elderly man inside.

“He was coherent, we felt it was a better idea to get him out somewhere dry and warm.” 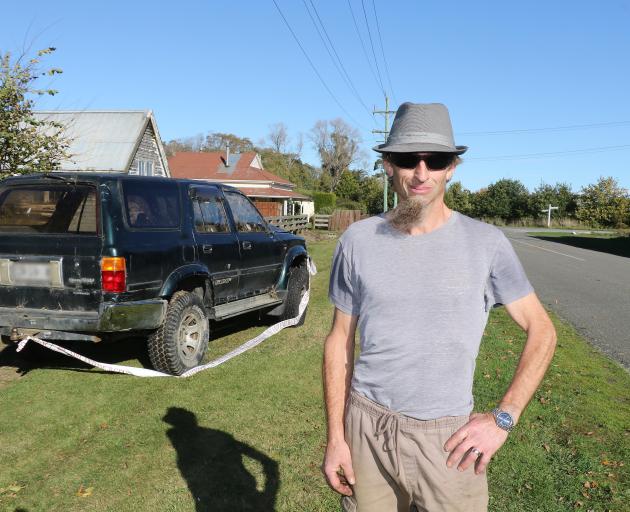 Richard Steel. Photo: John Cosgrove
The driver had failed to take a corner while travelling through the small settlement at the intersection of Brookside Burnham Rd and Boundary Creek Rd about 11pm.

His car hit a power pole before going into the water race.

Steel said the car was filling up with water to the point of submerging the right side of the man’s body.

The obvious way to extract him was through the front passenger door, which was on the upside of the car.

However, this was obstructed by the branch of an oak tree. Steel ran back to his house and grabbed a hand saw. He sawed the branch off, opened the door and climbed into the car.

The man’s right leg was trapped under the steering wheel, but Steel freed him by tilting the seat back a couple of notches.

The man appeared to be in shock and to have taken a knock to the head, but was aware enough to make sure he retrieved his glasses, which had apparently fallen off, and check that his cellphone was still in his pocket.

One of the neighbours held open the door as Steel pulled the man from the car, then helped him onto the bank of the water race.

Richard Steel and the damaged 4WD. Photo: John Cosgrove
Steel believed a contributing factor to the crash was a lack of street lighting at the corner, where crashes had occurred in the past.

He had told Selwyn District Council about two months ago a street light on the corner was not working.

“It’s quite a nasty corner, I think a lack of lighting on the corner certainly contributed.”

District council infrastructure group manager Murray Washington said a request was made on March 23 to fix the light, but there was an error with the location of the job.

Washington expected the light would be fixed this week, and said it would not be appropriate to comment on possible causes of the crash without seeing the police report.

After the crash, Steel towed the car out of the water race, concerned that diesel and oil might leak and kill trout and eels.

They were pleased to see the man had been freed by residents, and thanked them. The man was talking to paramedics who were treating him.

“The outcome was great,” Walker said, adding the driver had been lucky to survive.

Confirming the car was not leaking any diesel or oil, they left it in the water race.

Firefighters liaised with police regarding salvage, which was the responsibility of the car owner and their insurance company.

The trapped man was taken to Christchurch Hospital by ambulance in a moderate condition.