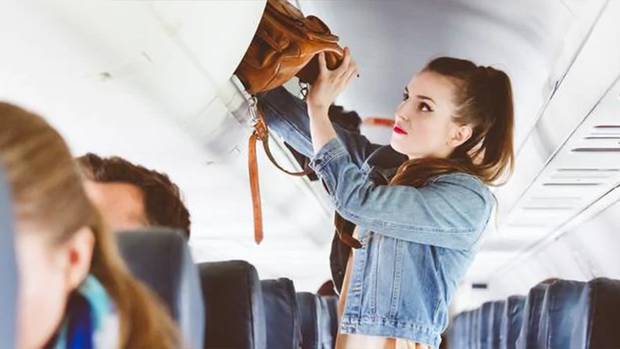 The days of waiting for someone to grapple with their luggage in the overhead luggage compartment may be a thing of the past. Photo: Getty Images
Overseas travel is going to look a little different following the Covid-19 outbreak across the world.

Already, some airlines have banned alcohol on flights, changes to entertainment and meals, and for some blankets and pillows are no longer being provided.

While some changes have appeared a little grim for travellers, one airline has decided to ban some travellers' pet boarding peeve, leaving thousands chuffed at the new rules.

An Italian airline has banned the use of the overhead luggage compartment.

For those who get frustrated while waiting for everyone to pack and unpack their bags in the overhead while holding up passengers from exiting, the news will be thrilling.

For those who enjoy utilising the overhead carry-on storage, the good news is passengers will be able to check in their carry on at no extra cost.

The ban applies to all flights arriving and departing from Italian airports, even those that are long-haul international.

"To protect the health of passengers, the use of overhead bins for the storage of hand baggage will no longer be allowed on all flights operated in Italy.

"Passengers will only be permitted to bring on board small baggage, that can be placed under their seat such as, for example, handbags, backpacks, laptop cases not exceeding 36x45x20 cm. We invite passengers to deliver their baggage to the airport at the Check-in / Drop-off counter, to be placed in the hold, free of charge."

The move comes after numerous airlines around the world banned tickets for the middle seats to aid in social distancing.