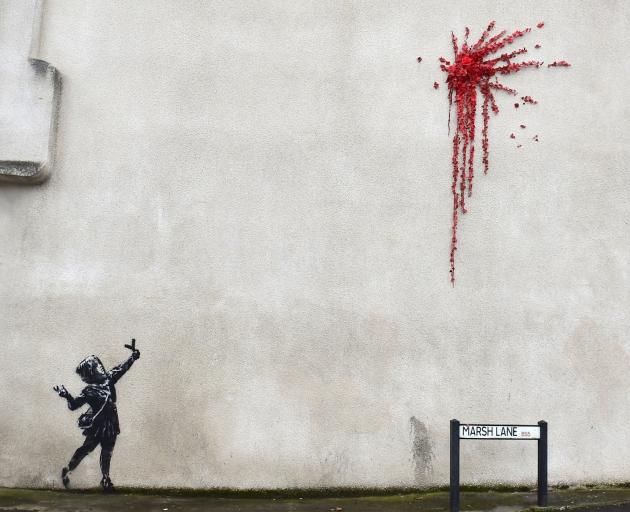 A suspected new mural by artist Banksy is pictured in Marsh Lane in Bristol. Photo: Reuters
British street artist Banksy has given a Valentine's Day gift to his home town of Bristol in western England with the appearance of a new mural showing a small girl with a catapult and a splatter of red flowers.

Banksy - whose identity is not publicly known - has posted the image on his official Instagram feed, a method he often uses to claim ownership of his works.

The graffiti shows a young girl in a headscarf, stencilled onto the side of a house in the Barton Hill area of Bristol with black and white paint.

She holds a catapult in one hand with the other hand behind her, as though she has just launched a projectile. At the end of the catapult's trajectory is a bright red shape like a blood splatter, made of red plastic leaves and flowers.

It was spotted on Thursday morning, the day before Valentine's Day and a protective covering has been put on the work to protect it.

In December last year, the elusive artist highlighted the issue of rough sleeping with a mural showing two flying reindeer pulling a homeless man on a street-bench sleigh, in the central English city of Birmingham.