The Wizard: A living work of art 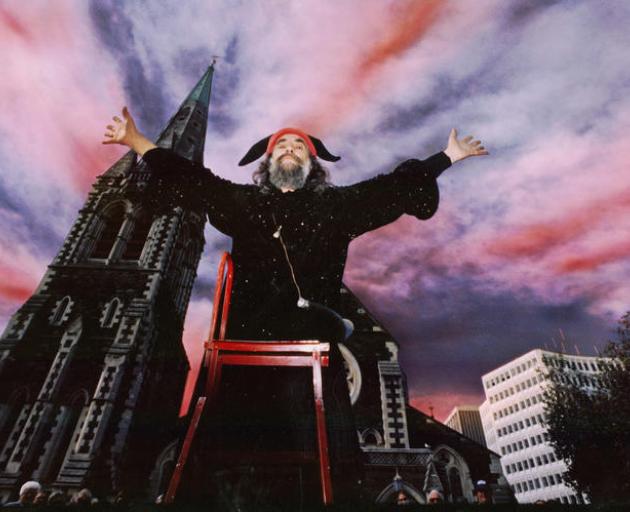 Cathedral Square was The Wizard's stage. Photo: Courtesy of The Wizard
Anyone who visited Cathedral Square before the 2011 earthquake will know of The Wizard of New Zealand - an iconic figure and mainstay of the Christchurch city centre. Often dressed in a velvet kaftan and pointy wizard hat, he carried a wooden staff and performed on a step ladder that acted as his portable podium.

These days you’ll find The Wizard, who refers to himself simply as Jack, living a much quieter life in Oamaru.

But what many won’t know is that the man formerly known as Ian Brackenbury Channell, was also part of a larger project that would see him become a living work of art.

“That means everything about you is created by yourself as an artwork,” says The Wizard.

"Your identity is only one thing, but you need to have a whole lifestyle - your family and friends, the universe you live in and the way you see the world - has to all be turned into something aesthetic, rather than moral or rational."

The Wizard's transition to become a living work of art began to take shape while he was living in Melbourne. It was 1969, and he was starting a new position in the Department of Social Science and Sociology at the University of New South Wales, where he specialised in religion and revitalisation movements.

During this period, he was looking into new ways to challenge social and political ideology. But he wanted to activate this by steering clear of violence, and instead, confronting people with what he refers to as ‘unusually creative responses.’

For The Wizard, that was very much like street theatre. But he was keen to push the envelope further by creating a fully formed aesthetic.

To make this official, he and his partner, Alice, visited the National Gallery of Victoria. It was there they met with director, Eric Westbrook, who was excited by The Wizard’s proposal. Becoming a fully fledged living work of art was edgy and provocative. No one had ever conceived of something like this before.

In order to fully immerse himself in the project, The Wizard would need to relocate to a place where he was anonymous in order to build a world around him. It also meant saying goodbye to the life he had once known. 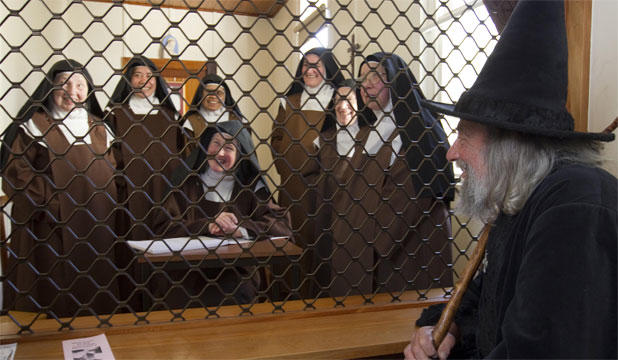 Photo: Courtesy of The Wizard
Christchurch was his location of choice.

“It was actually my ideal community,” says The Wizard.

“It was founded by romantics in the 19th century who really loved art and debate and argument. They were very much like me.”

But the success of the project would rely on witty, provocative and humorous communication with the aim of provoking a strong response from the audience, in this case, the general public.

The Wizard first performed in the Christchurch's Cathedral Square in 1974, and on his earlier appearance, faced plenty of resistance. The city council attempted to remove him from the Square citing that he needed a license to perform there. Not that this stopped him.

“I spoke in a gas mask, I spoke in French, I spoke in tongues, I spoke mime. I was in a cardboard box speaking inside the box," he says.

"Because I'm using fun as my main technique to avoid confrontation with unimaginative boring bureaucrats I had to use fun.”

Over the course of three months, police also attempted to arrest him without much success. By this time, The Wizard’s audience was growing and the council finally gave in.

“I made such fun of the whole thing that they finally made free speech part of the Christchurch city square’s function.”

In 1982 the New Zealand Art Gallery Directors Association issued a statement pushing for The Wizard to be recognised as an authentic living work of art. And around the same time, The Christchurch City Council appointed him Wizard of Christchurch.

Almost a decade later, in 1990, he was officially appointed Wizard of New Zealand by Prime Minister, Mike Moore. He was also awarded a QSM in 2009.

But after the Christchurch earthquakes in 2011 the city’s concerns shifted from tourism to rebuilding the city and the Cathedral Square is not what it once was, which meant The Wizard no longer had a place to perform.

So what becomes of The Wizard of New Zealand's status as a living work of art?

“He is a living work of art - it has become part of him now,’ says Neil Roberts, a former curator at the Robert McDougall Art Gallery.

“People passing him in the street won’t say, ‘Oh there’s the living work of art!’

“The living work of art doesn’t exist when Jack returns to his ordinary life as he does day-to-day. And that is related to conceptual art anyway,” says Roberts.

But that's not to say The Wizard's impact on the city has been forgotten. The Wizard, according to Roberts, transformed the city from what it once was, delighting his audience through his performance in the Cathedral Square.

“So he’s brought that element of colour and provoked thought. Something that the city would have been lesser in that period had he not been there.”

Listen to the podcast to find out more about the Wizard's involvement in the Christchurch art scene and why he's a figure in the city's history that will never be forgotten.