A man accused of importing 110kg of methamphetamine into New Zealand, concealed in golf carts, has admitted the offending.

This morning in the High Court at Auckland, Chiu Tan Yu pleaded guilty to the importation of the class A drug. 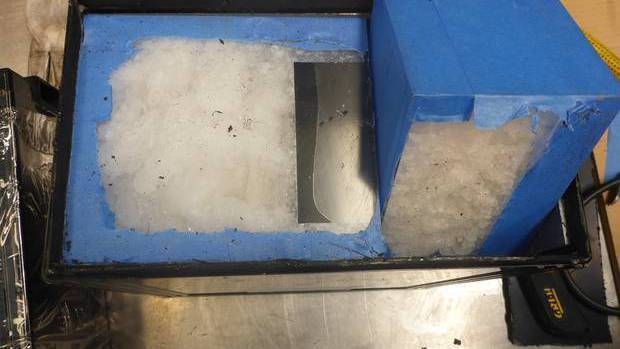 Around 110kg of meth was found inside golf cart batteries in February last year. Photo: Supplied

The charge denotes that in Auckland on January 22 last year he imported 110kg of methamphetamine within three electrical golf carts from the US.

A co-accused has previously pleaded not guilty.

Defence lawyer David Niven requested that a conviction for Yu not be entered until sentencing, an application that was supported by the Crown and accepted by Justice Gordon.

Yu will next appear in court for sentencing on September 4.

The large quantity of "ice-like" methamphetamine had a street value of about $55 million and the seizure stopped an estimated $136.3 million of social harm to the country, according to the NZ Drug Harm Index.

Customs investigations manager Bruce Berry said in February it was one of the top five methamphetamine seizures he had seen.

It was part of more than 343kg of drugs destined for the New Zealand market in just over the past year that had been intercepted by Customs, he said.

Search warrants at residential addresses in west and south Auckland led to the two arrests.

Detective Inspector Paul Newman from the National Organised Crime Group said in February police had been working with Customs to bring the operation to a successful conclusion.

"It's another excellent example of the two agencies' collaboration and our focus to prevent the harm caused by drugs such as methamphetamine," said Newman.

"These illegal drugs are destructive and have no place in our communities.

"We know they cause negative health implications, and financial and social harm to users and their families.

"We are focused on and dedicated to disrupting the production, smuggling and distribution of methamphetamine, and we think this is a great result."

Increasingly large-sized seizures were becoming an international trend and New Zealand was "no stranger to this", said Berry.

"What we are seeing is organised crime expanding its markets in the wake of gluts of cocaine and methamphetamine internationally.

"Traditional borders mean nothing these days in the age of globalisation."

Drugs were largely moving from Central and Southern America into Canada and then on to Australasia, he said.