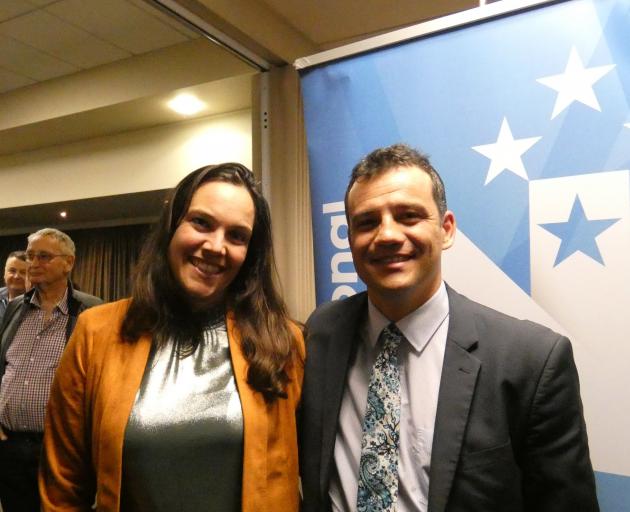 Delegates from all over New Zealand's largest general electorate gathered in Alexandra tonight to make the selection from a field of three, which also included Dunedin businessman Matthew French and former Allied Press journalist Olivia Caldwell, of Southland,

Mr Mooney (41) is a senior trial lawyer and has built his own law practice in the Southern region.

He is to replace disgraced and outgoing MP Hamish Walker, who sent private details of people who tested positive for Covid-19 to media, and decided to not to contest the election on September 19.

The meeting began at 7pm at The Cellar Door in Alexandra which, along with Clyde and the Teviot Valley, will become part of the new Southland electorate.

At selection meetings, potential candidates give a speech and answer any questions before members present cast their vote.

Mr Mooney said he was very excited to be chosen "and I’ll be hitting the ground running in the lead-up to September 19".

Acknowledging there were only 49 days until voters go to the polls, he said he was "determined to work hard to make sure Southland has strong representation in Wellington."

“There is no doubt that Southlanders are a hard-working, determined group of people - but right now they are all worried about the future, what the state of our economy will look like, whether they will have a job and how they will support their family.

“More than 200,000 people are currently unemployed, with a further 436,000 on a wage subsidy. When that ends in September New Zealand could be looking at half a million people unemployed," Mr Mooney said.

“National is focused on supporting Southlanders and their livelihoods, from backing Kiwis who have lost their jobs and are looking to start their own business, to backing existing businesses to take on another employee.

“I care about this part of the country and our community. Southlanders can be confident that I will be a strong, vocal representative for them under a National Government after the election.”

Joseph Mooney was born in Hawke’s Bay and grew up in the country. He now lives in Queenstown and has built his own law practice in the Southern region.

He has three children with his wife Silvia.

Mr Mooney left school without any qualifications and later went to university, obtaining an honours degree in law.

He is a senior trial lawyer, is on the Southland Branch Council of the New Zealand Law Society. He was appointed in 2017 by the Deputy Solicitor General to the Crown Prosecution Panel for the Invercargill Crown Solicitor. He has also been appointed by the Court as a Youth Advocate.

Mr Mooney has been an Army reservist and volunteer firefighter.

In his spare time he likes to ski, mountain bike and spend time with his family.