The sculpture shows a man in the image of former All Black captain Richie McCaw and cost about $80,000 to make. Photo: supplied
A petition has been started in a bid to bring a Chinese artist's metal sculpture of Richie McCaw to Christchurch.

Yang Yi, an AUT University graduate whose larger-than-life metal sculptures of Transformer robots have featured in China and Singapore, is looking for a home for the McCaw sculpture, which he is calling the “Undefeated Kiwi”.

Now Matt Vannoort has started an online petition to bring the sculpture to Christchurch. On Thursday, the change.org petition had been signed by more than 50 people.

Mr Vannoort aims to get the statue put on display in front of the planned new Christchurch Stadium once it has been built.

"I have started the petition to bring the Metal McCaw to Christchurch to be displayed out the front of the new stadium," he said.

The 7m statue was made from scrap metal and weighs about three tonnes. It is now sitting at Yang’s studio in his home city of Shiyan in China.

Yang, a 32-year-old artist, said: “The sculpture is something all Kiwis can identify with, and I believe it will also be a great tourist attraction with many taking photos with it. 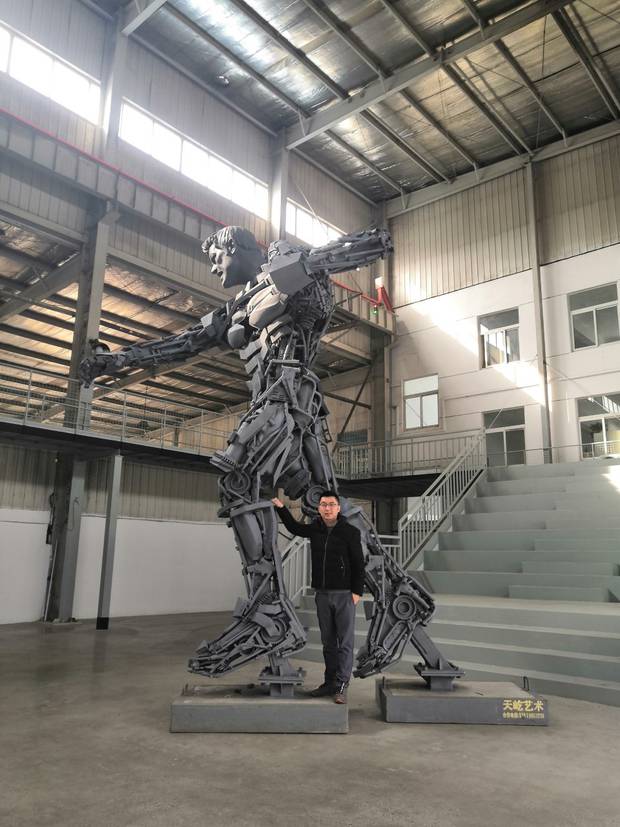 Sculpture artist Yang Yi is looking for a home for his latest creation, a 7-metre metal sculpture in the image of Richie McCaw. Photo: supplied via NZ Herald

“I spent around $80,000 over the last two years to create this sculpture, which I feel portrays the true spirit of New Zealanders,” Yang said.

The sculpture shows a man in the image of McCaw holding a rugby ball in a running position.

“I chose Richie McCaw because the sculpture reflects the precious spirit of all New Zealanders through rugby and Richie is one of the outstanding representatives,” Yang said.

“It captures the never-say-die, never-give-up and ever-forward-moving attitude of New Zealanders through the sport of rugby.”

Yang has written to Rugby New Zealand for support, and says although money is not his concern, he hopes whoever adopts the statue will help contribute to at least part of the cost.

“I wish to dedicate it to all New Zealanders and through it boost the morale of the All Blacks,” he said.

Yang has been sculpting metal figures since he was 19, and his 14m creation of Transformer Optimus Prime is now on permanent display at the Shenyang Centre business district, with others at Universal Studios in Singapore.

In 2014, he was also invited by Hollywood martial arts star Jackie Chan to create a sculpture Drunkie Chan to mark 50 years of Chan’s acting career.

In New Zealand, art collector Allan Gibbs also commissioned Yang to build his Marshall Alan sculpture in 2017, which is on display at Gibbs Farm.

In 2012, the Auckland Council rejected his offer to construct the McCaw statue because it did not fit in with its public art plans.

The council’s public art manager Carole Anne Meehan said in a letter to Yang at the time: “The panel does not recommend the acceptance of your proposed gift as our existing public art plan calls for a landmark work of a very different nature to the one you have proposed.”