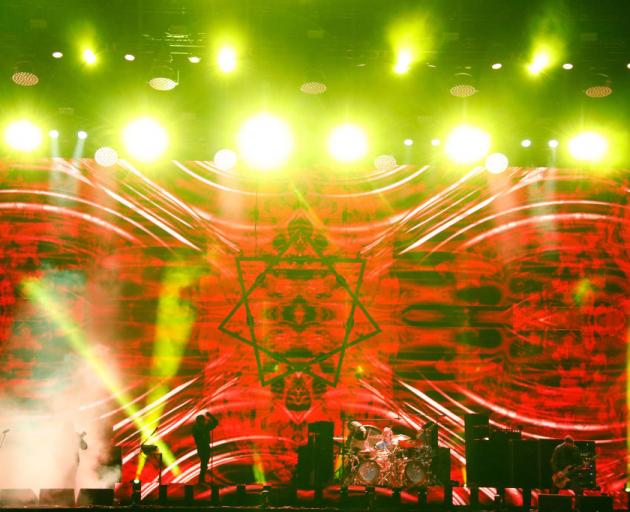 A fan who attended one of Tool's NZ shows was also the country's fourth Covid-19 case when he tested positive a few days later.

Keenan, 56, said in an interview with the Joe Rogan Experience host Joe Rogan that he had felt unwell, having lost his sense of taste the night before the band was due to fly from Australia to New Zealand to perform two concerts in late February.

"Food didn't taste right, but this is all hindsight right, we didn't know at the time that these are the things you're looking for."

Keenan said he spent four days in an NZ hotel "just trying to get through it" before the concerts at the Spark Arena in Auckland.

"I was just drinking water, hot showers, taking care of myself, hot tea, just trying to get through it and it sucked," he said.

Keenan saw a doctor in New Zealand and asked if he thought it could be Covid, but was told it wasn't because he didn't have a fever.

The concerts went ahead as scheduled but Keenan said "it was not fun".

"We had to kind of adjust to set around a little bit, don't put the hard ones in."

Keenan continued to have a cough and his hands hurt when he tried to do martial arts. He was diagnosed with Covid-19 after flying to Hawaii.

"I thought well maybe I sprained my wrist, so months go by that they're not healing ... I finally went to a doctor, an arthritis doctor, and he was like 'okay, so walk me through when you first saw ...' And I started walking him through everything, he goes, 'You had Covid'."

Months after his recovery, Keenan believes he is still suffering from lung damage.

"I still have the cough. So whatever cough I had, whatever cough I got in New Zealand, like every other day, I'll have a coughing fit for, you know, for 10 minutes, coughing up stuff, so I have lung damage from it still," he said.

A fan, an NZ citizen in his 30s, who attended the Tool concert on February 28 was the fourth confirmed case of Covid-19 here.