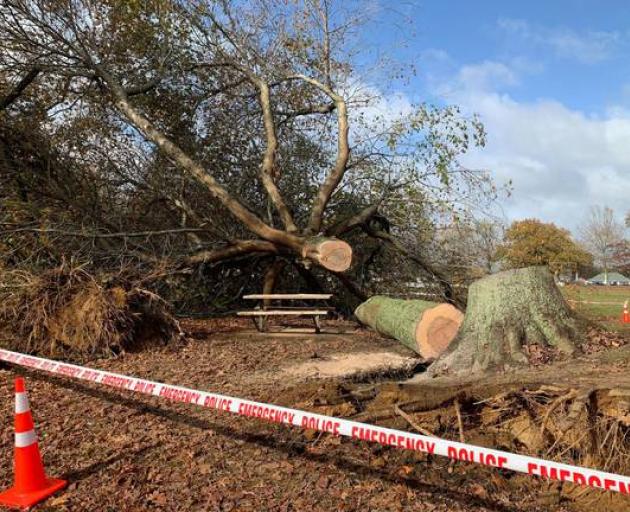 Emergency services were called to Victoria Square Gardens in Cambridge about 10am on Friday.

The woman suffered critical injuries and had to be freed from under the fallen tree by firefighters in the square.

Police confirmed the woman passed away in hospital this afternoon and the death has been referred to the coroner.

The local council told RNZ a clean-up operation is under way and the 80-year-old tree is being chopped up.

The large tree toppled over onto a picnic table.

Elsewhere in the Waikato town, a large tree has toppled across a house and cars, bringing down power lines.

MetService said there was a moderate risk of severe thunderstorms across the region, which could produce damaging gusts of wind and there was also a slight chance of a small tornado.

Locals have reported seeing small tornados in the area.

In Auckland, the harbour bridge has been closed due to high winds.

NIWA warns of more to come

The National Institute of Water and Atmospheric Research is warning strong winds similar to those that hit Levin are expected along the entire west coast of the North Island from Friday afternoon.

Meteorologist Ben Noll said the winds would potentially be damaging, with gusts of up to 80km/h.

"Certainly, any loose items outdoors, folks'll want to make sure they either bring them inside or take them down," he said.

Heavy showers and some hail were also expected and road snowfall warnings have been issued for the Desert Road in the North Island.

In the South Island, temperatures are expected to fall and snow is forecast for higher elevations, particularly on the Crown Range and the Milford Road.

Noll said the worst of the storm would pass over the country today.