Life among the birds helps Rolleston 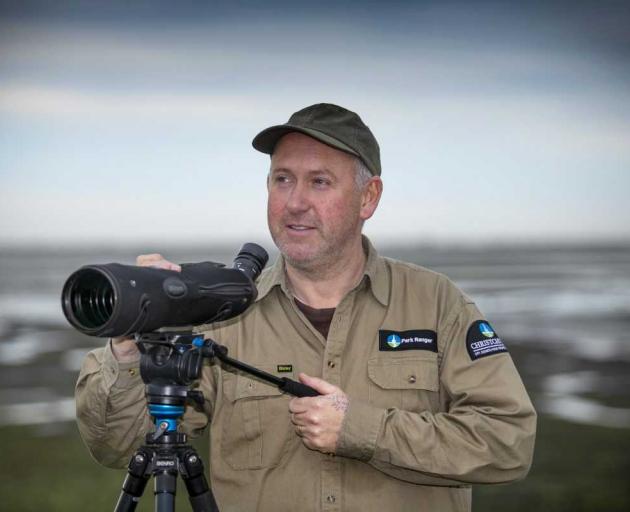 City council park ranger Andrew Crossland has more than 20,000 pages of field notes on different birds around Banks Peninsula, the Styx, Heathcote and Avon Rivers, Lake Ellesmere and coastal areas
Andrew Crossland has been recognised by Birds New Zealand with a Robert Falla memorial award. The Rolleston resident and Christchurch City Council park ranger talks to Louis Day about how birds have shaped his life and career.

What exactly does your role consist of?

A big part of what I do is habitat development – I don’t just look at birdlife. The default is birdlife because we don’t have lions, tigers and giraffes around the landscape. But in New Zealand by default a person who is a wildlife manager, which is what I am, goes into birdlife. My interest is how to develop habitats or how to recognise habitats that are of value to wildlife and how to enhance them and protect them, and how to manage the behaviour and activity of people. So I look at Christchurch as a big national park and it has layers. It has got street layers, the factory, housing, it has also got the parks and it’s about facilitating wildlife across the city without annoying people and without people annoying them.

Would you say birdlife is one of your biggest passions in life?

Oh yes, absolutely. It’s a calling. It has given me a really good career and has taken me around different parts of the world. I am probably better known in Indonesia than what I am in New Zealand because I have done a lot of exploration over there, and in some cases, I was the first person to visit since Marco Polo. Down in Sumatra, I have identified huge bird populations people did not know existed anymore. That all happened because in 1985 I found a bird on the estuary in Christchurch called the asian dowitcher and, at that time, it was one of the rarest birds in the world and it wasn’t really known where they wintered. They breed in the Arctic and no one knew where they went to. I was very interested in this particular species and two years later some scientists surveyed the southern part of Sumatra and found quite a few thousand of these birds. I finished university in 93 and I found some old World War 2 military maps of the northern part of Sumatra, about a 1000km north of where the birds had been found. So I went to Sumatra in 94, 96 and 97 and many years since, and I doubled the world population of this bird. While I was doing that I found thousands of other species of bird that migrate from northern Asia down to Indonesia and Malaysia and also Australia. Some made it to New Zealand. I found that first record for New Zealand when I was 15, and that bird really changed my life in terms of me exploring that part of the world. I speak the language and I met my wife there and my kids are half Kiwi and half Sumatra and we spend a lot of time over there.

I was born in Motueka, but I grew up in Christchurch. I went to Linwood Avenue Primary, Linwood Intermediate, Linwood High and then Canterbury University.

How long have you been involved with birdlife?

I have done it in a few phases. I started doing this work in 1984 when I was 14-years-old, I think, and became a consultant for the city council and then I worked as an ornithologist for the water services unit from 1997 to 1999, then I went overseas and I changed careers and was an embassy officer. I worked for the New Zealand High Commission Singapore and then I returned and I have been a park ranger since the end of 2002 till now. So I have been monitoring wildlife in Christchurch for 35 years.

What is it you love the most about your job?

Why should people care about birds?

We should care about all of our indigenous wildlife. They have an inherent right to live and it is also a major part of our culture and birdlife is one of the most visible parts of our native wildlife.

I believe all wildlife should be looked after. Birds also represent connection throughout the country with the migration networks throughout New Zealand and overseas. Basically, we have a responsibility to look after wildlife here and it makes complete sense to keep an eye out for it. There is no greater attraction than looking at colourful birds in the tree. We share the planet with these other life forms and we need to be not solely focused on our ‘you’re born, consume and die cycle’.

Has local birdlife deteriorated or improved since you started in your role?

I really started getting involved in major conservation efforts in 1993. That’s when the wetlands began to get built and there was a period of mass innovation and a lot of investment in the city from then into the quakes.

There was an incredible increase of birdlife and pretty much every species of bird was increasing until the quakes. When the quakes hit. Unfortunately there were some outbreaks of avian botulism and thousands of birds died over several years, but we now have managed to stop that. We have been very active in combating that, and last year for the first time, we had no avian botulism.

What do you see as the biggest threat to birdlife?

I think it is human disturbance. I think that predator control is important and the provision of habitat is also important. But what we are doing is we are trying to put people in every space where wildlife is. Humans have occupied big chunks of the world but they left a bit around the fringes, like the edges of wetlands. But now we have got adventure sports and other stuff and we are occupying them for wilderness cycleways and other activities and now we are occupying places where wildlife has been consigned to, and we are displacing wildlife. In Christchurch, there is this sort of thing where people need to enjoy the wildlife and the environment, and that is true, but we need to be very clever in the way that we are planning our reserve networks to make sure every important site has a sanctuary corner that is not disturbed. We aren’t doing enough and so there are some significant threats to wildlife, which are almost all to do with too many people in the wrong place.

How long did it take you to learn how to spot a flock of hundreds of birds and within seconds identify their species and accurately estimate their numbers?

I guess it took a couple of years to learn the skills. I’m not the only person who can do that obviously. When I began to get into wildlife as a young guy, before the Department of Conversation was formed, there was an organisation called the New Zealand

Wildlife Service and also the Ornithological Society, which is now called Birds New Zealand. There were a couple of people there that acted as mentors and gave me the opportunity to learn the skills from them and then you quickly learn stuff yourself, so I’m sort of self-trained, but certainly rubbed shoulders with some highly-skilled people and a lot of that knowledge has rubbed off on me.

How did you train yourself?

People say to me ‘you know the name of a whole load of bird and animal species’, so I say to them name 50 types of cars or dogs and they can do it. Anyone who is interested in a certain field and wants to gain skills in that field quickly learns through motivation and by using resources. In the wildlife field, we have field guides and books with all the species on them and you learn the field characteristics of these species and you learn the calls by simply being out in the environment. It’s no different to a car dealer who can name lots of different types of cars.

What was your reaction to winning the Robert Falla memorial award?

It is quite a prestigious award and normally you get it for a lifetime achievement. It came out of the blue and I wouldn’t have given it to myself until 30 years time if I even deserved it. It is a great privilege to get it. It is kind of just a bit early. Totally unexpected and I’m kind of overwhelmed by it. I am sure there are a lot of people out there who have done more than me who should have got it before I got it.