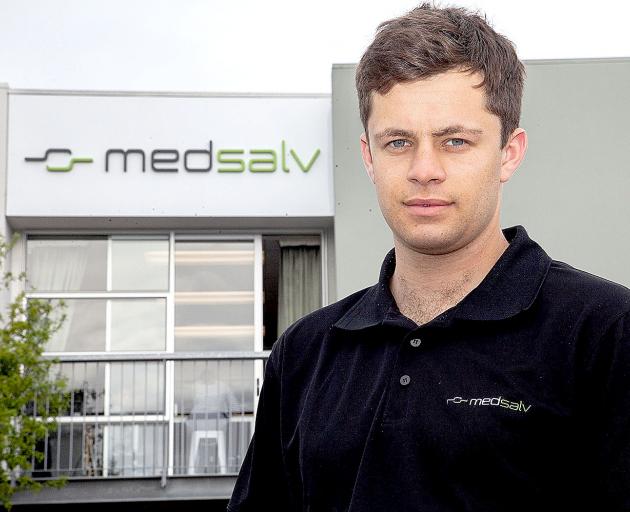 So Medsalv is New Zealand’s single-use medical device reprocessor, so we take used single-use medical devices from hospitals where they would usually go to landfill and we test them, inspect them, clean them and sterilise them, whatever is required to get them back to a reuseable, safe, clinical re-use state and then we give them back to hospitals for a lower price than their original price.

What made you want to start Medsalv?

I was discussing waste and inefficiency in health with my uncle and on the back of that conversation we looked at some medical devices that he had in the back of his garage which weren’t actually used but they had expired and done some more digging and found that there is this huge waste stream in New Zealand that isn’t being addressed at all so it was really that which made me want to start the business and obviously being able to provide a cost-saving as well is a good thing. The three core pillars are environmental sustainability, financial and patient care sustainability. We are delivering fantastic resource efficiencies when there were originally none.

What is the dream for you?

In New Zealand, the goal is to eliminate the 1700 tonnes of waste from single-use medical devices which we estimate is going to landfill on an annual basis and turn those into medical devices which can be reused once or more at least and deliver a saving in the realms of $100 million per annum. That is where we would like to get to because that is what we think this is a totally addressable problem.

Any plans to take Medsalv overseas?

The problem in New Zealand is massive so we are trying to solve that before going into offshore markets. Not ruling it out though.

What age did you start your business?

What was it like starting a business at such a young age?

Interesting, I have always been driven to get involved and pursue a project and essentially this is just a huge project and you know, this is a fantastic way to learn a lot but also be able to make a difference with it is great too.

How did it feel winning the champion business for good award?

Do you have any role models?

I think, Sir Paul Callaghan has had some pretty good ideas about technology and New Zealand in general and I can see some of them coming through in New Zealand today. There are obviously some people in the startup world over here that have done some amazing things, if you don’t say Peter Beck then who do you say? Also, the guys who run companies like Icebreaker, Jeremy Moon, Tim Brown with Allbirds. There are so many people in New Zealand that you can look up to that have taken on mammoth problems and made a serious dent in them. I don’t look up to any one person, I look at particular people for their strengths.

What is it you enjoy the most about your job?

I think it is probably being able to align my personal values with what I am doing on a day to day basis. I am obviously really interested in sustainability and more equitable health. A key reason for being is to deliver the best health care to the most people in the most sustainable way.

What are the biggest challenges of your job?

There are a lot of people in healthcare who defend the status quo and the nature of our business disrupts that which is not necessarily easy all the time, look where the status quo has got us. The status quo is clearly not delivering for New Zealanders.

What are your hobbies?

I am pretty into my outdoor sports, surfing, skiing and mountain biking are probably my three passions, I quite like playing tennis as well but yes, anytime spent outside is a good time.

Where do you see yourself in 20 years time?

I haven’t even looked past 10 to be honest. Hopefully living in a country with a far better and more sustainable health care system. But honestly 20 years is a long way away, I’m only 25 so I would be 45, so I’m not sure.

I would say I would have both of those things and I think I will be living in New Zealand and out still skiing and mountain biking, hopefully, there will be snow on the mountains that is probably my key concern for the next 20 years. Will I be able to surf or will I be surfing halfway through New Brighton over the shops? But in terms of realising where I see myself in 20 years, I hope we have at least reached our goal of saving New Zealand’s health care sector $100 million per annum and the problem that once was no longer exists. Medsalv is a problem that exists to solve a problem that shouldn’t so if we rid New Zealand of that problem in 20 years we will be doing well.

What did you want to be when you were growing up? Did you always want to be repurposing single-use hospital equipment?

For a long time, I actually wanted to be an orthopaedic surgeon which my uncle is. I thought it was a cool way to combine a mechanical passion, being good with hands with caring for people I also have a family which I say is infested with doctors which is a good thing but I mean that was something I was keen to do, I toyed with the idea to be a professional skier but it wasn’t for me.

I have lived in Christchurch for the majority of my life apart from a brief stint in England when I was a kid. I went to Elmwood School and then Cobham Intermediate then Christchurch Boys’ High School.

Where and what did you study?

Did you live the stereotypical student lifestyle? Were you in the University of Canterbury Engineering Society?

Not so much the stereotypical student lifestyle. I was on ENSOC for a year but I was also on the Canterbury University Board Riders Association and got involved in that, so yes, I did get involved in student life.

Do you miss being a student?

Yes, there are obviously good thing and bad things about being a student. So yes to a point. The good things about being a student would be that you have complete control over your own time and nobody is checking if you are going for lectures, you can go skiing every day of the week or whatever, few good parties and you get to play with some pretty cool stuff at the university form an engineering standpoint, they have got cool equipment.

What were some of the bad things about student life?

Well, you have got to go to class eventually, you have got exams. But on the whole that would be about it, it’s mainly just good fun