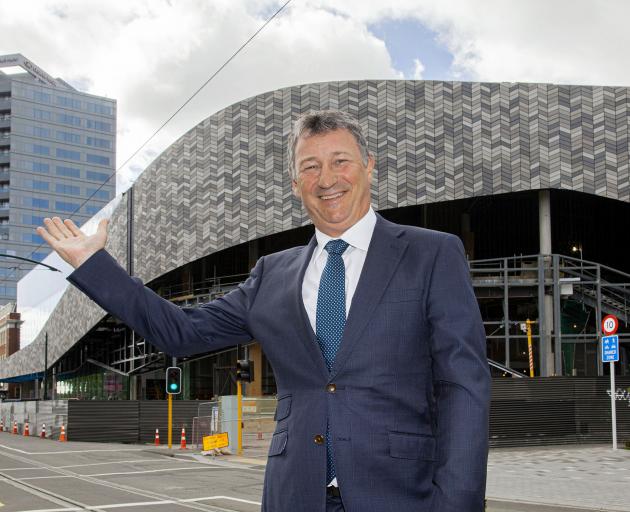 How will Te Pae be essential in the city’s regeneration from the earthquakes?
I think convention centres are built to drive economic and social value to the cities to which they belong to. I think that is really important for any city, and in a city that is going through a regeneration, I think it is even more important. A lot of people do talk about the economic value that convention centres bring. But the social value as well, world leaders will be congregating in Christchurch and coming to conventions in Christchurch and sharing their knowledge with our leaders and leaving a legacy behind. It is also an opportunity for our guys to share their knowledge with world leaders as well.

What will be the first events held at Te Pae?
We start off with the New Zealand College of Midwives on October 15, and then Intecol, which is wetland scientists. That is an international event with about 1000 delegates. Straight after that, we move into the Ford National Mustang Convention, so we will have about 200 cars in and around Te Pae, which will be fantastic. From there, we just kick off throughout the year.

Are you on track for the October 15 opening?
Otakaro [the Crown organisation responsible for the construction of Te Pae] has advised us they are on track to be open on time so we are steaming ahead towards that.

How much money do you expect Te Pae to bring into the city?
It is difficult for us to tell, but ChristchurchNZ estimate around $90 million [annually] has been lost because we don’t have the facilities to host events needing a convention centre. Previously, Christchurch had around 24 per cent of the business events that were hosted in New Zealand. That is down to about eight per cent now. We have a real opportunity to bring it back to that 24 per cent and go beyond that once we open. We have got just over 50 events that we have confirmed since we have started working here and that will generate around $28 to $30 million of economic impact for the city.

Talk me through the design.
The convention centre itself has a 1400-seat auditorium, which is divisible by two so you can run 700 on either side, which is great so you can do quite large concurrent events. We have 40-odd meeting rooms in different configurations throughout the building. They can either be opened up or held together. We have 2800 sq m of exhibition space, which can be expanded to 3300 sq m. We have a 1000-seat banquet hall, they are beautiful rooms on the top level overlooking the Avon River. Again that can be split into two where you can run two concurrent or multiple events at the same time. We have also got a large full production kitchen with satellite kitchens within it with the ability to serve all those areas at the same time.

How confident are you of Te Pae being a success?
I am absolutely confident. I think the team we are building is world-class and a world-class team of local people. We are seeing some really good local people coming back to Christchurch.

Do you think Te Pae could be the final piece of the central city puzzle?
I have only been here a short time but I think it is a good piece of the puzzle throughout the city because it diversifies the visitor mix. Christchurch has always been a good leisure destination. You see the cruise terminal being expanded and built, which will bring more cruise delegates - that is a different type of visitor. We will bring business event visitors, which are high-yielding to the city. It diversifies the visitor mix and takes out the peaks and troughs in the city’s visitation. For example, the majority of our conventions will be hosted from March/April right through to November/December, which traditionally is not the leisure time within the city. So we are hopeful we will be able to bring a different visitor to the city and smooth the peaks and troughs in visitation.

How well do you think Te Pae will compete with other convention centres in New Zealand?
I think we will compete really well. The destination plays a part in that, as well as airline access, the hotels and the different types of infrastructure that you need within a city. We are starting to build that infrastructure here in Christchurch. Te Pae is a missing piece of infrastructure that we need to host conventions, hotels are coming online and we have seen some announcements recently about more opening. Once that infrastructure starts growing and the momentum starts growing we will see Christchurch come back to the levels it was before and even surpass that.

Are you confident Te Pae can attract events from Europe, Asia and America?
I am confident in the work we do that we will do that. I am also confident that there is a significant level of people within the Canterbury region that are at the top in their field that can assist us in bringing conventions to the city.

Could we expect events other than conventions at Te Pae?
We will be doing exhibition stuff as well, particularly for the public, live events and performances as well in the 1400-seat auditorium. We have the opportunity in our exhibition space to do large stand up general admission type of events.

Will you be employing locally?
Everyone that works here will be a local and the teams that we are starting to build up are locals. Our executive team and senior management team are pretty much on board now and then we start recruiting throughout this year for our operational team. We think we will have around 200 employees all up and that will be a range of full-time, casual part-time employees.

How long have you been in Christchurch now?
I have been here for about nine months since the end of March. It was actually my last day at the Cairns Convention Centre on March 15. I was at lunch with the executive team over there for my farewell and news started coming in about what was happening in Christchurch. I was getting texts from a lot of people that knew I was coming here and I couldn’t believe it. I think the way New Zealand handled that crisis actually put them on the world stage for the right reasons for something that was really terrible.

Where did you grow up?
I grew up on the Mornington Peninsula in Victoria. I went to high school there in a place called Rosebud. I went to Deacon University but in the Warrnambool Campus so in Western Victoria and I studied accounting so I have a finance and governance background and came through with a bachelor of business. I then moved from there to London and that is where I met my now wife Vicki, who is a Kiwi born right here in Christchurch. We actually went back and lived in Brisbane for a while and that is where I started working in convention centres and moved to Cairns and have been there a long time before I moved here.

How exactly did you meet your wife?
At a pub in Mayfair actually - it all sounds very nice, doesn’t it? It was back when I was on my overseas experience, we were both young, it was good. We bought a Kombi van and travelled all over Europe
together. We went all through Europe, the Eastern Blocm had just come down then so we did a lot of travel through there but spent a lot of time in Turkey. It was really great.

Main hobbies growing up?
Sport. My dad is Scottish so I was raised playing soccer. I could not wait from the age of six to actually play soccer, I played a lot of soccer and cricket. My dad was actually brought out to Australia to play soccer. My dad, Sid Steele, actually played for Ringwood Football Club in Australia and he played for Tranent in Scotland. Interestingly, Blackburn Rovers knocked on his door the day he was leaving for Australia.

Hobbies now?
I like playing golf, pretty average golf, but I enjoy having a game of golf and I like riding mountain bikes and getting out.

What jobs have you had before stepping into this role?
I was from a finance and governance background so after university I worked in audit for a while before I went overseas. Overseas, I worked in the insurance industry for a while in the financial side of the industry. I then came back to Australia and back into audit and one of the audits I did was the Brisbane Convention and Exhibition Centre. They asked me to come and work for them, which I eventually did, and that was the start in the convention industry.