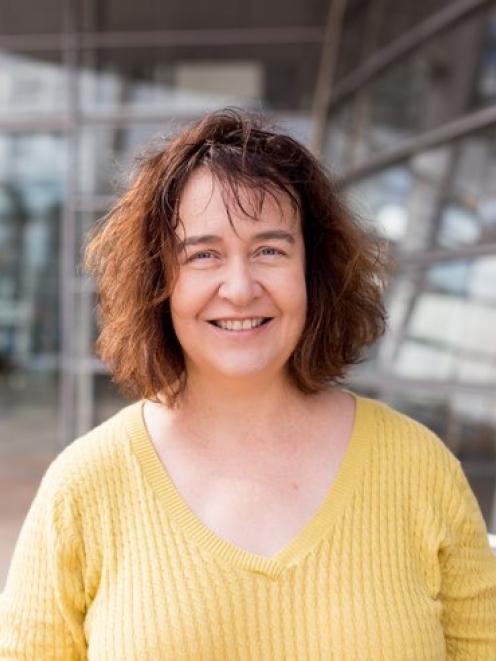 Associate professor Amy Fletcher. Photo: Supplied
Amy Fletcher was two years out of grad school when she applied for a job on the other side of the world in 1999. Now an associate professor of political science and international relations at Canterbury University, Covid-19 has forced her to return home to the US next year. Chris Barclay has a tutorial.

Why did you join the ranks of academia after college?
I was always very good at school, I was one of those people that took to it. Saying: ‘I’m a professor’ always sounds nice to say. It suited my personality, my interests and my skills.

What was the motivation in continuing your career in New Zealand and how did you end up at Canterbury University?
I graduated from the University of Georgia in 1997 and did two very nice, but one-year positions. I knew coming into my third year after grad school I was looking for something permanent. The American Political Science Association newsletter showed a job in public policy, science and tech … defence. I can still see myself getting an 87c stamp and putting my CV in mailbox thinking: ‘Alright I’ll give it a go.’ About a month later I got an email from the department. That was back in the day when they could fly four or five candidates in from around the world. I got a very nice three-day on campus interview and I ended up getting the job.

Did you do much study about New Zealand before arriving?
I watched Heavenly Creatures. I did research, but there was quite a culture shock even though we have certain things in common like the English language.

How difficult was it assimilating to university life in Christchurch?
I guess it was a mixed bag. One thing I’ve noticed about the students is even if they’re very much on the left or critical of America, students for the most part have been lovely. There were some difficult moments with my colleagues – particularly when (George W) Bush was elected. When I attempted to articulate a US point of view it’s sort of like suddenly I morphed into this informal secretary of state. In the late 90s some people within academia were very hostile to the United States.

Backpackers from the US often sew a Canadian flag on their gear to deflect anti-Americanism. Have you ever claimed to be from Toronto rather than Tennessee?
No. I can’t do that. I have too many veterans in my family.

Understood, but have you ever felt the need to apologise for being an American?
No, I wouldn’t do that, but the one potential exception is Vietnam. Even now it is very difficult to reconcile your vision of what you want America to be as a patriotic American with the reality of power being used in such a destructive way for reasons that are quite suspect.

How about Donald Trump. Are Americans, especially abroad, embarrassed by your Commander in Chief’s antics?
Some are, but I find this a bit over the top. Criticising US policy and foreign policy is part and parcel of living in this world. Trump has a brash persona that he cultivates and he enjoys baiting liberals and progressives. He has an extraordinary amount of power, so criticism of him is fair game. I’ve never been “embarrassed” by the United States. Angry, worried, despairing, yes, at times – but never embarrassed. I do not see too many saints in politics, anywhere, or in any party, so find the whole notion of “apologising” is often just a subtle form of narcissism and/or virtue signalling. Some Americans abroad play a bit too much into the: ‘I’m the expat who hates my home country’ thing as a way to try to fit in.

Do you view Trump as the most polarising US president?
Definitely. But you do have to remember Richard Nixon was very polarising. When Mitt Romney ran in 2012 there were people on the left that referred to him as a Nazi. In some ways Trump is at the extreme edge of what you might call the US spectrum of politicians but it’s always been pretty rough and tumble. 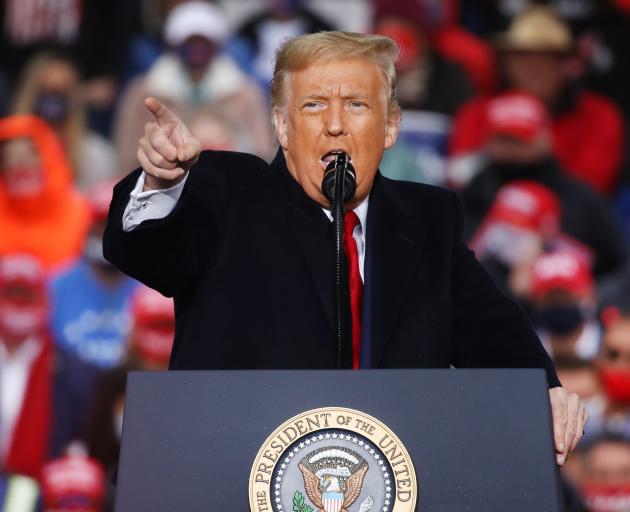 Donald Trump. Photo: Spencer Platt / Getty Images
Who wins? Trump or Joe Biden?
If the numbers are accurate Biden will win. And we know the numbers weren’t accurate (for Hillary Clinton) last time. If Trump wins it wouldn’t surprise me in the least.

If Trump loses will he vacate 1600 Pennsylvania Ave gracefully in January? The Proud Boys have already been told to ‘stand back and stand by’. Is that veiled threat unprecedented in the US?
To know if it was truly unprecedented we’d probably have to go back to the 1920s and 30s. Certainly those voices (hard left and right) are more connected and amplified than they used to be. The likelihood of violence in some cities is higher than it’s been in a very, very long time. If Biden wins it’s in his interest to be as generous as possible. I don’t think there should be a lot of: ‘Ha ha ha we won’. Emotions will be running very high.

Speaking of emotions, have you connected with Kiwi culture? Are you now a passionate rugby fan?
No, but I never had much of an affinity with (American) football either and I come from the South. I miss ice hockey, that’s a brutal sport.

How has New Zealand grown before your eyes since 1999?
The most interesting thing, culturally, is the increasing visibility of Maori culture, Te Reo. The university is now very committed to the principles of the Treaty of Waitangi.

You’ve lectured in the States. Is there a clear distinction between students here and back home?
Americans are always ready to throw their hands up and have something to say. Kiwi students are more reserved. I sometimes think Kiwis are almost too modest and don’t have as much confidence as they probably should.

Where are your former political science students utilising their knowledge now?
Last I heard we have a graduate of our Masters in Policy and Governance or international relations degrees in every ministry in Wellington. Some are now working in the States, Brussels, London. Some align themselves with a party, do party work and move up the ranks.

As you’ve mentioned aligning with a party, if you don’t mind us prying – are you Republican or Democrat?
As a political scientist I’m glad that people sometimes wonder. Being a Gen-Xer I describe myself to the students as a ‘Bill Clinton Republican’. I loved Bill Clinton, I voted for Obama but I am very much on the centre.

So you didn’t vote for Trump then in 2016?
That was the point in my career where I was being asked to do much more public speaking on US elections and politics so I actually didn’t vote in that one as tensions were running so high and I wanted to try to maintain some analytical objectivity. I also missed the registration deadline for citizens abroad. I’m perfectly happy to concede, being from Tennessee, that virtually all of my relatives did (vote for Trump).

Is it important to appear impartial in the lecture theatre?
There’s so much baggage around the United States that I have tried to be more objective. Yes, there are reasons some people find Trump intolerable. But because New Zealand is more centre-left relative to the US, I sometimes felt my job was to say: ‘Wait a minute. There’s a whole bunch of other stuff going on as well and it’s quite simplistic to assume the Republicans are the bad guys and the Democrats are the good guys’.

Your work is clearly time-consuming. Have you managed the travel around New Zealand?
I like going to Wellington and Auckland. I’m not a big backpacker so I probably haven’t been able to take as much advantage of New Zealand as I should of. I do have to say it was fascinating to live through an earthquake.

Were you tempted to leave after the quakes?
No, I was one of those recommitted to helping rebuild the university. My family were concerned, it definitely made the news back in the States.

More local news that made headlines Stateside was the mosque shootings. How do you view that gruesome event?
I want to be very careful how I say this because on the one hand I think Jacinda Ardern led with compassion. Her response to such a tragedy was remarkable and the response of the people who endured that tragedy was remarkable. The forgiveness … all of it was very moving. The one thing I was interested in how quickly the manifesto was made illegal, we’re not going to use his name. All discussion of the perpetrator, his views, where he came from, how he organised a day like that seemed to just be shifted off the radar and in a sense you’ve just rendered those views invisible again.

You also witnessed New Zealand reacting to 9/11 early in your tenure here. How was it watching that terror attack unfold so far from home?
I remember the cone sculpture in Cathedral Square. People began using it spontaneously as a place to leave flowers. Many Kiwis were very, very generous but when we went into Iraq, New Zealand drew a line and did not support the invasion. You could see that mirrored in some of the angry voices. Around 2005 I was eating dinner by myself on the (Oxford) Terrace and a Kiwi heard my American accent. He just started screaming at me in front of everybody. That was just one person, but during the Bush administration you did run into more overt criticism. 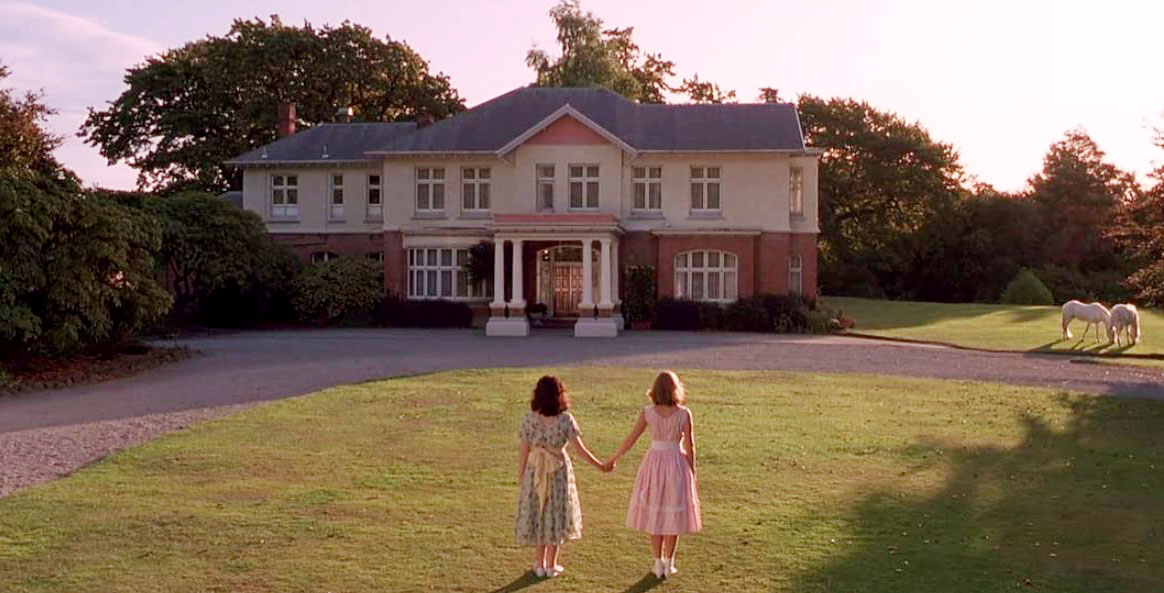 Amy Fletcher first noticed the Ilam Homestead in the movie, Heavenly Creatures, and then happily discovered it housed the staff club when she joined Canterbury University. Photo: imdb.com
That obviously wasn’t a fond memory but what will you miss about Christchurch?
Every time I go to the staff club – it is actually the rich girl’s house in Heavenly Creatures – in spring I love seeing these specific colours just blooming for the first time. You never get used to how beautiful it is.

Now, thanks to Covid-19, you have a spring to look forward when you return home to Knoxville in late February, don’t you?
Covid-19 has made it so difficult to get home now. Flights are less reliable, we can’t know when there might be another round of virus outbreak, you have to go into quarantine. As my mother (Sandra) gets older – I also have a close relative who does have some significant health issues – I just need to be closer to them.

Your father Bill, who passed away in June 2018, shaped your academic future didn’t he?
He came from a very hardscrabble background and he became an engineer. He worked on the Apollo project. As a middle class dad it was very important to for him to pay for my college education. At the time I just took that for granted but now I realise what a gift that actually was.