The Panthers led for all but the first eight minutes of the match and were in front by 16 at halftime as the error-stricken Keas struggled to gain traction. But led by stalwart Andrew Auimatagi, the Keas clawed back in familiar fashion after the break as yet another classic decider between the great rivals unfolded.

The undeniable star of the show, though, was 20-year-old Hornby fullback and captain Sincere Harrraway. The gifted livewire scored a sensational solo try in each half, laid on another four-pointer and was a constant threat – as well as providing some much-needed level-heading playmaking. The Mel Cooke Trophy as player of the grand final was just reward for a wonderful performance.

Long-serving second-rower James Baxendale missed an early penalty goal chance but played a key role in Hornby opening the scoring in the eighth minute, his deft switch of play on the last tackle allowing Charlie Charlie to dive over out wide.

Baxendale nailed the sideline conversion for a 6-0 lead.

The Panthers’ discipline with and without the ball dropped off in the ensuing period but their defence got them out of trouble, rebuffing multiple dangerous Keas raids.

A superb one-on-one strip from ageless hooker Corey Lawrie put the Panthers hot on attack again – and brilliant fullback Sincere Harraway injected himself to create a commanding 10-point advantage. The young captain combined with Baxendale then placed a wonderful pass on the chest of Charlie, who slipped down the narrowest of corridor to plant it for a grand final double.

Hornby kept the foot on the pedal and went out to 16-0 at the half-hour mark through the precocious Harraway’s game-breaking class, the skipper dummying and stepping his way over for a memorable solo try. 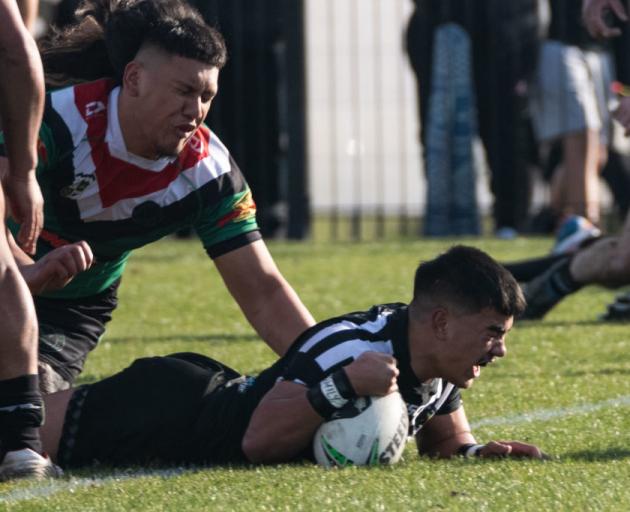 Photo: Matthew Musson Photography
The remainder of the half was marked by ferocious defence from both teams, while Linwood managed to survive a second line-break from Hornby’s lightweight lock Jordan Campbell and a forced line dropout from a slick Harraway grubber without any further scoreboard damage before the break.

Vital opportunities to eat into the deficit early in the second half slipped through the Keas’ fingers. Sloppy dummy-half passes foiled one raid, while five-eighth Andrew Auimatagi – featuring in his first grand final on the field since he was Linwood’s player-coach in 2015 – made a long bust only to contentiously be ruled to have lost the ball over the try-line.

But the Keas’ 2016-19 premiership-winning mentor would not be denied in the 48th minute after shifting to hooker, barrelling over Panthers defenders to open his side’s account. Interchange half Leon Jarden slotted the conversion from a handy position.

Memories of grand final fadeouts of seasons past would have come flooding back for the Panthers as the Keas went in again just three minutes later. A fairly innocuous cross-field bomb from Auimatagi was claimed by veteran centre Matthew Sauni, who slipped a great ball for winger Uili Uili to scoot 20 metres to the corner.

But just as the Keas’ experienced campaigners looked set to take control of the match, the Panthers’ contingent of youth swung it back in their favour. Harraway left Linwood defenders clutching at air in a mesmerising 20-metre, hot-stepping dash to score under the posts.

A match-sealing play dangled tantalisingly out of Hornby’s reach over the next 15 minutes – and Auimatagi took it upon himself to set up a grandstand finish with another powerhouse inspirational solo try with four minutes on the clock.

The Panthers thought they had it wrapped up with Eti Collins backed up to dot down after a 50-metre Campbell run, but they were called back courtesy of a knock-on decision.

Rapturous celebrations were only momentarily delayed, however – they saw off a desperate last-ditch Keas attacking raid to end the club’s eight-year wait for a 16th grand final win and kicking off a Panther party on-field that is destined to go deep into the night out Hornby way.

Few individuals would have taken as much satisfaction from the victory as Hornby coach Jed Lawrie, the losing mentor opposite Auimatagi in four straight deciders – but now the architect of a deserved premiership triumph.

The only points in the Premier Reserves decider came from the boot of Saints halfback Rangiawha and Bulldogs winger Keeghan Woolley – but the one of the grade’s great grand finals was consistently punctuated by outstanding defence from both sides that ranged from desperate to punishing.

Referee Jordan Chand did an admirable job keeping a lid on tensions that threatened to bubble over on countless occasions in a brutally physical contest, while the whistle-blower kept his cool in the nerve-shredding final minutes as the Bulldogs pummelled the Saints’ try-line.

Marist-Papanui led 4-2 at the end of a torrid first half, with a third penalty goal to halfback and player of the match Jimmy Rangiawha the only scoring play after the break – creating a scoreline that remained for 25 minutes until the fulltime whistle.

Both sides went desperately close to snaring an elusive four-pointer during the second half, only to be repelled by valiant goal-line defence and brought undone by rushes of blood with the ball in hand.

With a throng of vocal Bulldogs supporters barking from the embankment behind the posts and veteran half Izic Placid weaving his ball-playing magic, Northern was camped on the Marist-Papanui line for the last few pulsating minutes but fell agonisingly short of an equalising try.

Confirmation of fulltime sparked wild celebration from Saints players and their supporters, the Fred Arnesen Trophy in their keeping after an incredible finish to a dominant campaign for the combined outfit.

Sydenham stormed to a 22-0 lead before the half-hour mark through a combination of hard-running forwards in the middle the field and quick hands and footwork out wide.

Powerhouse prop Faleseu Fenika barged over under the posts for the opener, before Paleoaiga Loto produced a determined finish in the left-hand corner for the Swans’ second try.

Michelle Wong weaved her way through for the defending champs to go up by 16 and another elusive run from the livewire centre laid the platform for Janaya Mata to charge over and score.

But hooker Nella Ngahuru dragged Woolston back into the contest by burrowing over from close range just before the break, with five-eighth Cassie Siataga converting brilliantly from out wide. Siataga then capitalised on the Rams’ strong start to the second stanza, leaving several Swans in her wake to crash over beside the posts.

Siataga was forced from the field temporarily after a heavy collision shortly afterwards but superb Rams goal-line defence kept the deficit to 10 points heading into the final 20 minutes.

But the Swans landed a crucial blow in the 64th minute, with Kaitiana Fruean showing a clean pair heels and magnificent poise to force a superb kick to the corner from Katelyn Arona.

Sydenham could smell blood in the water and moved out to a 30-12 lead four minutes later, with halfback and skipper Jerusha Whiley splitting the Rams’ defence with a wrap-around move on the 30-metre line and beating the cover to scramble over under the posts.

Whiley left the field briefly with a leg complaint immediately after – but the playmaker had already done enough to put the Swans in a title-winning position.

Arona capped a wonderful individual display with a try two minutes from fulltime, while front-row workhorse Bunty Kuruwaka-Crowe repeated her 2020 feat by being named player of the grand final.

The Lions always looked in control, keeping the Eagles at arm’s length throughout by scoring the first two tries of each half. Zion Kamana finished with a hat-trick and second-rower Abraham Fonmoa was named player of the match after scoring two tries, laying on two more and  racking up an impressive tackle count.

The Eagles were made to pay for errors inside their own territory during the opening quarter. Stylish Lions centre Kamana and Fonmoa sliced through Eastern’s left edge defence for an early 10-0 lead.

Gilt-edged opportunities for the Eagles came undone through poor handling inside the Lions’ 20-metre zone, but they managed to tighten up their own goal-line defence to prevent any further scoreboard damage.

Celebration regain the ascendancy immediately after the break, however, making a series of long-range breaks. Fonmoa grabbed his second try after a long run from fullback Taniela Leka, before winger Tipazo Aukustino danced down the left-hand touchline to score.

The Eagles pegged it back to 20-12 through halfback Tyrone Stowers’ try, but the Lions put one hand on the Gore Cup when Kamana cruised over for his second and restore a 14-point lead before crossing again in the dying stages to complete his treble.