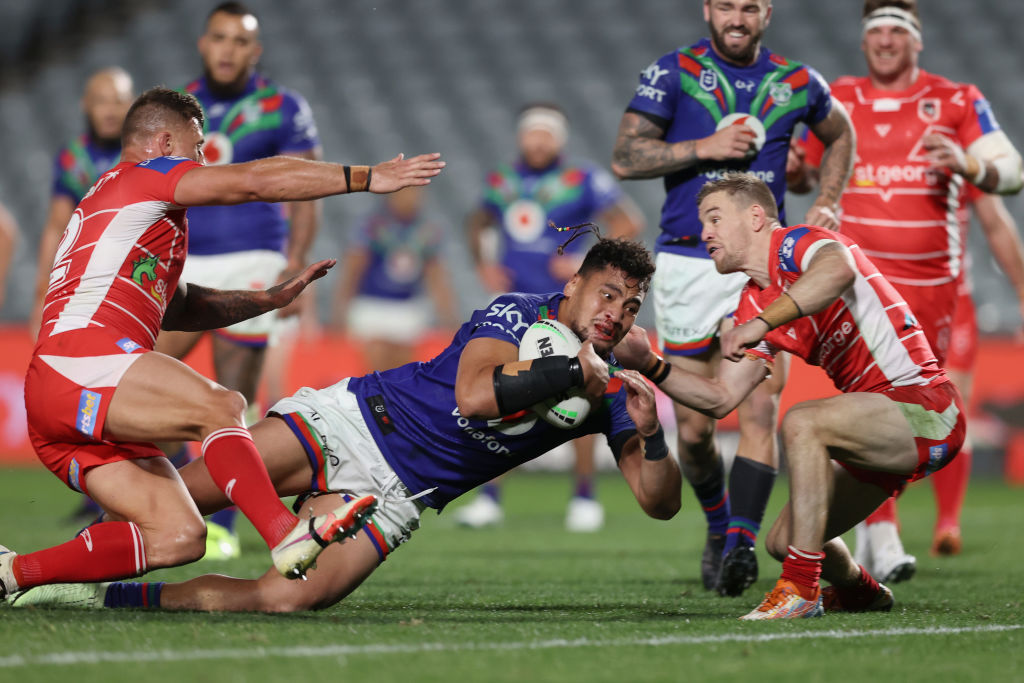 Eliesa Katoa crashes over to score for the Warriors against St George Illawarra. Photo: Getty Images
If you thought some previous Warriors losses this season were the stuff of nightmares, this one reached a new low.

This manner of this 19-18 defeat to the Dragons was horrific, the kind of psychological blow that leaves a deep wound.

It's hard to see a way back for the Warriors from here, as they lost from what seemed to be an impregnable position.

The Dragons scored a try on the buzzer – in the last second of the game – then iced a golden-point field goal in the second extra time period.

The Warriors looked to have the game won, ahead 18-6 with eight minutes to play, but invited St George back into the match with a couple of poor decisions.

But again, with a minute to play the Warriors looked to have snuffed out the danger, only for the Dragons to trap Roger Tuivasa-Sheck in goal and force a goal-line drop out.

It was tough on the Warriors. They had dominated for most of the contest but failed to finish it off. It was yet another lesson, among a series of matches they have let slip this year.

They'll need an incredible run from here to get near the playoffs, but their confidence and belief must be at a low ebb.

New recruit Chad Townsend was targeted early, hit late and in the air by Tariq Sims, damaging his right shoulder, though the offence went curiously unpunished.

The Dragons opened the scoring through a cheap escort penalty, the kind of call you seem to get when things are going against you. They had been building pressure – with consecutive repeat sets – and a Ben Murdoch-Masila drop in his own territory was the final straw.

That gave St George more momentum, with Ben Hunt crossing off a Paul Vaughan offload in the 21st minute, after sustained possession.

Things got worse quickly for the Warriors, as they lost Tohu Harris to an HIA, after a savage collision with the shoulder of Sims. In the circumstances they showed good spirit to stay in the contest, rewarded with clever try to Wayde Egan, who fooled three defenders with a couple of dummies close to the line. That sparked the home side and their strong end to the half was capped with an Eliesa Katoa try, as the young second rower ran off a clever Townsend inside ball.

Their run continued after halftime, as the Warriors camped in the Dragons half. Their passing was snappy, their running hard and their intensity evident. They turned down a kickable penalty, then were rewarded with a strong try to Bunty Afoa in the 50th minute.

St George forced their way back into the match, and only some desperate defence stopped them closing the gap, with Tuivasa-Sheck and Marcelo Montoya coming up with brilliant tackles.

Just as the Warriors seemed to be easing to the finish line – with several Dragons errors – they handed some initiative back, with Fonua-Blake pushing a needless offload. It was a crazy play from the marquee forward and started the spiral.

It eventually led to a simple Gerald Beale try, with the Warriors left edge getting their numbers wrong for one of the few times.

St George lifted, and a missed Townsend field goal gave them a seven tackle set, where an innocuous grubber gifted Jack Bird a try, after Ed Kosi and Tuivasa-Sheck got in each other's way.

The Warriors still looked to be home in the last minute, before the Dragons forced a goal-line drop out, with Tuivasa-Sheck trapped in goal. The Dragons only had 30 seconds, but managed to engineer a try for Ramsey, who crossed in the last second, after the Warriors' right edge defence rushed up and in.

Norman's sideline conversion then hit the post, to send the match into golden point. The period was messy from the Warriors – with a series of errors – though they defended courageously, before Norman eventually made them pay.