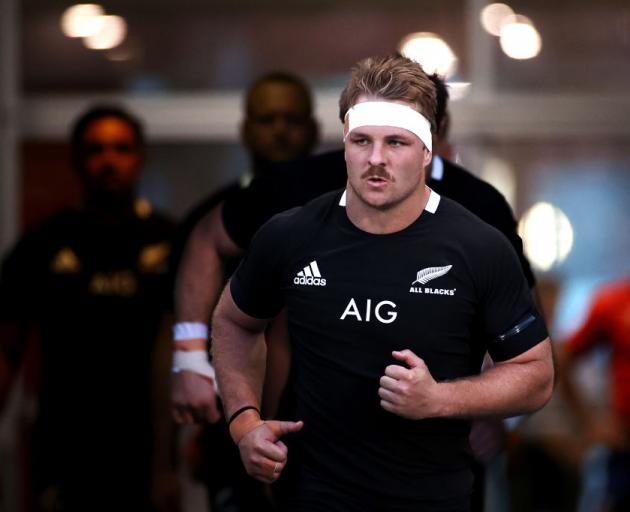 Sam Cane of the All Blacks leads his team onto the field during the 2020 Tri-Nations match between the Argentina Pumas. Photo: Getty Images
In some ways it was not a surprise.

We live in a society where house prices rocket up in the same year as a pandemic. Where skifields are packed and at the same time foodbanks are crying out for funds. How is a hotel made out of a plane planned at an airport?

Yes, logic seems to have gone out the window. Reality has left the building. The real world has moved down the road.

It continued on Thursday night when All Black captain Sam Cane was named All Black player of the year and then picked up the Kelvin R. Tremain Memorial Trophy at the New Zealand rugby awards.

Now, he is a good bloke is Cane, and nothing against him, but how did he exactly get the award?

The side that goes on about legacy, the side which has the highest standard of any in the land, the one that bangs on about its winning record — "the most successful international rugby team of all time but also one of the most successful teams in world sport, with a winning test record of more than 75 percent."

So with a three wins, two losses and one draw record, including a first ever loss to Argentina, how — yes, how — did the captain pick up the top prize?

Cane had some good games as a player in the black jersey this year and hardly missed a tackle all season. But when you are the skipper of the All Blacks, individual performance is not the sole criterion of how you play — sure it is about your 80 minutes on the park, but it is also about the team record and how it plays.

Sadly Cane never convinced as a skipper in what was a rather muddling year for the national side. The team only had one really good performance and let’s be honest, Southland Country could have run the Australians close that night in Sydney.

It is hard to believe that Highlanders and All Black halfback Aaron Smith came away from the awards with nothing.

He was a star at Super Rugby level, but fair enough that Richie Mo’unga won that award as he was top-notch for the Crusaders. There was nothing between Smith and Ash Dixon for the top Maori player. But surely Smith should have won ahead of Cane.

Smith has been in the All Black team so long, he now gets taken for granted. Well, with one year left on his contract, and foreign teams bound to be lining up to get his signature, he may be tempted to go elsewhere.

And watch out if he departs — because daylight is second behind Smith.

The line of TJ Perenara advocates gets shorter by the day.

Sure, perhaps there is a Smith bias in the south, but he had a top year and hopefully will bring up 100 tests for the All Blacks next year.

Totally agree with this article almost word for word .What more can this panel of wannabee rugby experts or judges do to kick the guts out of Aaron Smith ,Ardie ,Sam and several other deserving super stars , and ensure they reconsider the big bucks offshore .
My suggestion to keep this prestigious award alive is to have a judging panel made up from men who have earned and worn the Black Jersey and who have actually experienced the front line action and pressures of representing their homeland . Only then will we get something like a sensible result .
Really , what more do the worlds best halfback Arron Smith and others have to do . Maybe shift to the North Island . ????