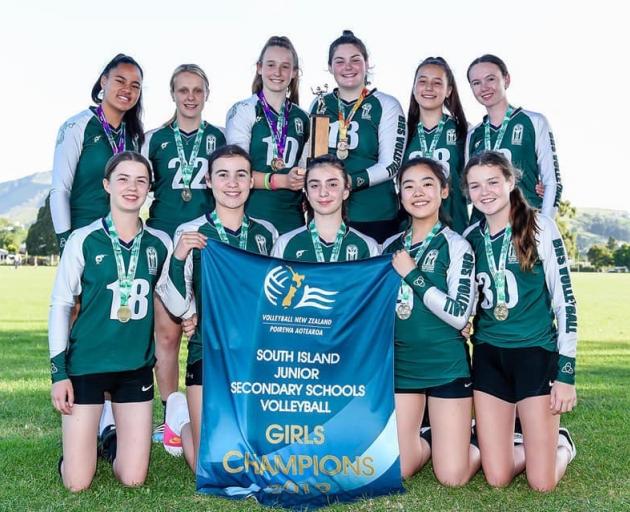 The Burnside High School junior volleyball team won the South Island title for the second year in a row. Photo: Supplied
A team of junior Christchurch volleyballers have dominated on both the sand and the court.

Not only did the Burnside High School indoor girls volleyball team win back-to-back South Island titles but Rosa Vesty and Taylah Holdem took out the beach title as well.

The pair will now head to Auckland in February to represent the school at nationals, where they finished fifth last year.

Teacher in charge of volleyball Sam Ryburn said they had a good chance of winning a medal this year.

“Last year they made the quarter-finals and lost to the eventual winners so if they can improve on that they should go close.”

He said Rosa and Taylah are key parts of the school's indoor volleyball success, having both been named most valuable players at the South Island championships in Christchurch's Pioneer Stadium.

Both teams had to overcome an early loss in crossover pool play to make the final.

Ryburn said the team refocused well after the loss and were able to bounce back.

“They came at us and really pushed us, but sometimes you need a loss like that in a tournament just to get you on the right track again.”

He said it was great to win back-to-back Canterbury and South Island titles, which was a first for the school.

“We have a lot of depth in volleyball at the school and a supportive environment, which helps bring success at both a junior and senior level over a number of years,” he said.