Avon-Heathcote Estuary penguins continue to be mauled by dogs

Dogs off the lead are chasing birds and killing penguins. Photo: Supplied
Little blue penguins continue to be attacked by dogs at a Christchurch estuary. 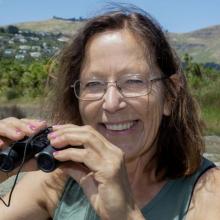 Tanya Jenkins.
Two penguins were killed near Redcliffs in December - but that number is likely to be higher, says Avon-Heathcote Estuary Ihutai Trust manager Tanya Jenkins.

She is urging dog owners to follow the rules and not allow their pets onto the mudflats in the estuary where the penguins gather.

Jenkins also said dogs are continuing to harass other birdlife, particularly on the Southshore side of the estuary.

Signs along the estuary state the mudflats are a ‘no go’ zone for dogs, but some local residents continue to ignore the rules, she said.

"During December, another two little blue penguins were mauled by dogs around Redcliffs, and if these two birds were found, there is a high chance the numbers are much higher when mauled birds are taken away by the tides," Jenkins said.

"Even if [birds] are not killed by dogs, the disturbance by dogs running on the mudflats can be life-threatening."

Owners must not allow their dogs onto the mudflats in the estuary where penguins gather. Photo: Supplied
Birds can only feed on the mudflats during peak low tide, which allows them a short window of only a few hours to eat enough to last the day.

Being disturbed by dogs can significantly cut down this time, said Jenkins.

"If, in this short time, they are scared, chased by dogs, it can take up to 45 minutes before they regain the courage to continue eating again," she said.

"Don’t get me wrong, I love dogs and have been a dog owner since I was 12-years-old, but it’s just such a shame that some dog owners are just not aware of the rules or simply do not wish to abide."

The trust want local residents to help make dog owners aware of the rules and report those who ignore them to Christchurch City Council.