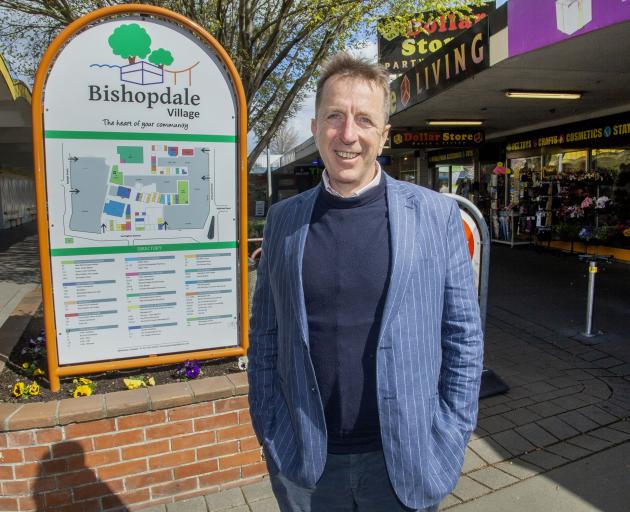 David Cartwright at Bishopdale Village mall. Photo: Geoff Sloan ​
Would-be investors will be sounded out and businesses might grow as the city council works out how to break the cycle of decline at the ageing Bishopdale Village Mall.

Some “private sector interests” in the suburb have already told Christchurch City Council staff they are interested in development and investment - but they said that before Covid-19 intervened.

The council is one of a clutch of mall landowners.

It wants to explore ways to revitalise a mall which officials say has been in a state of decline for more than 20 years.

The council last week endorsed plans to work with anchor tenants on small-scale revitalisation, and to develop an investment case to see what more can be done, and at what cost.

Harewood city councillor Aaron Keown described the mall in its current state as a "bit of a dunga".

"There is great opportunity here but like we have said, this was developed in the 60s and things have changed a little.

He said he could envisage the mall becoming more boutique and similar to the Tannery.

"That type of boutique mall on this side of town would work really well, there is a big catchment for it.”

However, city councillor Sara Templeton said she could not support the plan as she did not see it as a priority for council resources.

"We have got clear evidence . . . that shows that the inner-city east and New Brighton areas should be the priority for revitalisation,” she said.

"We have massive influence here, it is one of the few areas where the council is actually the main landowner in a major retail area,” he said.

"We are essentially the mall owner here, we have large tenants that are crying out to partner with us, you have a community that is desperate to see the council re-invest in something that it has a duty to, you look at the private sector that will re-invest in  malls every five to seven years in a major re-vamp, nothing has happened from the council.

"It is an absolute embarrassment and we have the ability to do something about this in existing budgets and I have got councillors wanting to vote against it, absolutely disgusting.”

In spite of Templeton’s protests, the plan passed.

The Fendalton-Waimairi-Harewood Community board will now play a leading role in the development of the investment case. The progression of the case to the council table for sign off will hinge on the approval of the community board.

Board chairman David Cartwright said while he was “excited” by the progress, there was still a lot of work to do.

"It is one thing to get the fish on the hook but to get it in the boat is another thing,” he said.

Cartwright said he was looking forward to working alongside key stakeholders in the development of the case.