When the devastating February 22, 2011, quake struck Christchurch, pianist and former paramedic Kris Baines was at a training session.

After escaping safely from the building, Baines said he and his colleagues found themselves in the midst of what he describes as "utter chaos."

He spent the rest of the day working in the city, with most of his time spent at the CTV building.

Kris Baines and Andrew Joyce, the principal cellist from the New Zealand Symphony Orchestra. Photo: Supplied
As a composer, Baines has been working on a musical tribute for the 10th anniversary of the earthquake this month.

In collaboration with Andrew Joyce, New Zealand Symphony Orchestra's principal cellist, Baines has been working on a video for his original composition From the Rubble.

In addition to footage of the duo performing in locations around Christchurch, the video also features all 185 names of the quake victims, set to the music Baines composed.

"Towards the end of the track, I transition into a very emotive arrangement of Pokarekare Ana, which seemed to fit so well, as it speaks of an eternal love for those we cannot be with," he said. 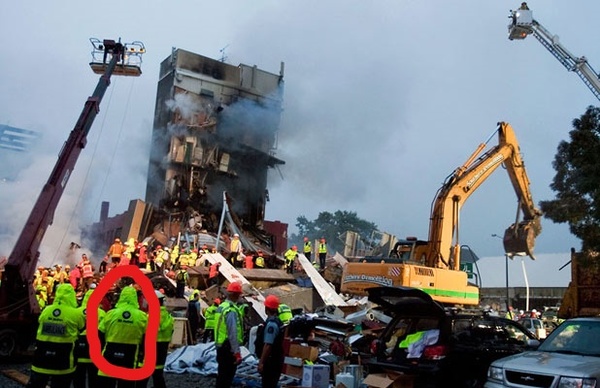 Kris Baines at the CTV site. Photo: Supplied
A Pledge Me campaign has been set up to help make the video “as good as it can be.”

“We set the target low to cover costs, but it would be great to improve the quality as much as possible and give something to those who have helped in so many ways.”

As part of the campaign, a percentage of funds raised will go to support St John, the Westpac Rescue Helicopter, and the Memorial Fund for the victims’ families.

Baines said he was honoured to also be invited to perform a solo piano version of his composition at the private memorial for the victims' families on February 22.

"It is such a special honour to be able to do this, and I know it will be quite emotional too."