Residents' family members and staff at a Christchurch rest home where two Covid-19 cases have been confirmed are concerned only a few of the residents have been tested.

The family members also claim staff at George Manning Lifecare & Village in Spreydon are not wearing protective equipment, such as face masks, at all times and residents are not being told enough about what is going on.

But Norah Barlow, chief executive of Heritage Lifecare, which owns and operates the rest home, said it is following all of the instructions it has received from the Canterbury District Health Board, which decides who gets tested and who doesn't at the rest home.

She says she wants all 83 of the rest home residents tested.

The two residents who tested positive are both women. One of them is aged 87.

A family member of a resident said their parent requested to be tested but this was declined by the CDHB.

Ms Barlow said the CDHB has told her that only residents who have a temperature and other symptoms will be tested.

"The cases are still under investigation and a number of staff from the facility are having to self-isolate as a precaution.

"People can be tested if they meet the criteria of the recently updated national case definition," Dr Brunton said. 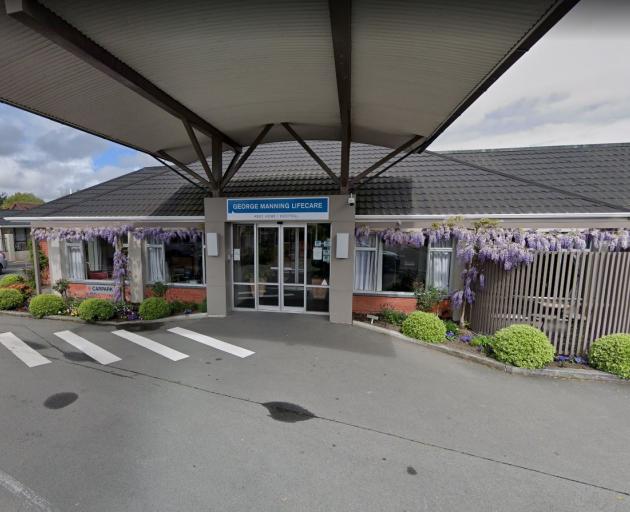 George Manning Lifecare & Village in Spreydon. Image: Google Maps
Said a family member of another resident: "Firstly our concern is for our [parent] that's in there, that they haven't been actually told what's going on.

"I rang my [parent] this morning and she said the nurse or whoever was in there wasn't wearing a protective mask and or gloves.

"When questioned about the mask the staff member said 'we had a meeting this morning and we don't have to'."

Ms Barlow said the rest home staff do not wear protective gear all the time, as this is based on instructions given by the CDHB.

She said residents have been informed of the situation but says this should have happened sooner.

An email Ms Barlow received from the CDHB read: "Facility staff do not need to wear PPE [Personal protective equipment] all day and when in general areas. Use only when into contact with residents with suspected, confirmed and probable infections."