Fraudster claims he was kidnapped at gunpoint in star's chopper

A convicted fraudster and one of New Zealand's most wanted former fugitives allegedly told his wife that he'd once been kidnapped at gunpoint in Hollywood star Russell Crowe's helicopter and feared for his life.

Ex-Australian TV presenter Simone Anne Wright aka Williams aka Smith is standing trial for perpetrating a $35,000 online fraud where she allegedly invented a dying child to "engender trust and sympathy".

But Wright claims she had nothing to do with the fake trades – and points the finger as former husband Paul James Bennett aka Dennis Kite aka David Kite aka Russell Bennett aka James Lochead.

Wright denies making up stories of a terminally-ill son being cared for at Auckland's Starship Hospital to sell motorbikes, a spa bath and other items worth thousands of dollars on TradeMe.

She has pleaded not guilty to seven charges of obtaining by deception and is giving evidence at her judge-alone trial at Christchurch District Court today.

Wright says Bennett, who she married in Sydney in 2002, used to tell her a lot of stories, including that he flew for Gladiator star Crowe and kept "a huge amount of money" offshore for tax purposes in the Cayman Islands, Switzerland, and Bahamas.

When they met, Bennett allegedly told her to sell her house and car, and that she didn't need to work anymore.

"Eventually everything was gone. Right down to a small suitcase of clothes," she said.

"I lost everything… He lied to me our whole relationship. He's an expert liar."

Wright says Bennett used to tell "spectacular" stories. One "big story" was how he had lived in South Africa and worked for CIA as a helicopter pilot and that he'd been "a witness to all sorts of things". 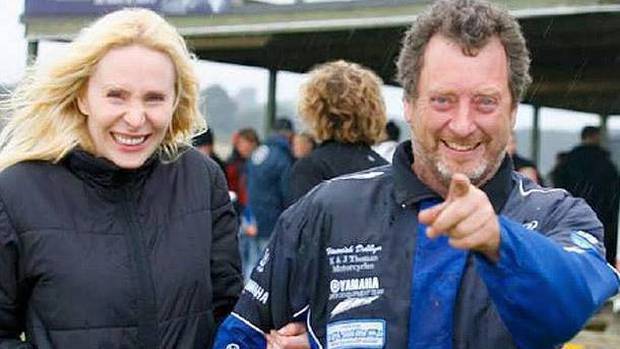 Simone Wright claims that her ex-husband Paul Bennett was behind a series of Trade Me frauds. She is standing trial at Christchurch District Court. Photo: NZ Herald
"He even bought a nuclear weapon into the story," she said, along with former British prime minister Margaret Thatcher's son Sir Mark Thatcher.

Bennett had fears for his safety, Wright said, adding he was afraid of "bad people in the English government" and that he'd been "kidnapped at gunpoint" in Crowe's helicopter at Coffs Harbour and afterwards his house had been burned down by an Australian criminal organisation she didn't want to name in court today.

"I was terrified that they wanted to kill him," she said.

She wanted to walk away from Bennett because "it was just too much drama" but claimed he was "quite manipulative" and controlled the money.

Wright says she had nothing to do with the fake Trade Me trades which dated back to May and June 2008.

She is accused of setting up two Trade Me accounts and two bank accounts while living in Napier.

On May 27, 2008 a used plug-in spa was listed for sale on Trade Me with its listing saying it was needed to "help pay family medical bills".

A Dunedin woman won the auction and paid $4065 for the spa.

In an exchange of emails around getting the spa delivered, the seller said they were at Starship Hospital with a son on life support. The buyer offered her best wishes but the spa was never received – and she never heard from the sellers again.

Another exchange involved a silage wagon and Suzuki quad bike sold for $16,500. When the items didn't arrive, the buyer phoned and spoke with a male who said they were at Starship with a nephew who had brain cancer.

A Kawasaki motorbike was allegedly sold three times, with stories of a sick son. "Our son has cancer and can no longer ride his pride and joy," its listing said.

The Crown claims that the sick child was fictitious and made up to "engender trust and sympathy".

One witnesses today told how after buying the bike for $2650 he had a phone conversation with a woman called "Susan" and sympathised with her tale of a sick son with a brain tumour.

"As a father with a son the same age you get sucked along. It was a good game," the witness said.

They soon had concerns of a con and when they tried phoning back, got no answer.

They never got their money back.

Asked by defence counsel Elizabeth Bulger if the "woman' the witness spoke to on the phone could've been a man putting on a woman's voice, he laughed.

"Not a chance," he said, adding that the woman had a slight accent and might've been English.

Wright – along with Bennett - was arrested as they sailed into Sydney Harbour after crossing the Tasman Sea from Northland on a crippled yacht in February 2015.

She was extradited from Australia to New Zealand in November 2018.