No time frame to finish cemetery work before anniversary celebration 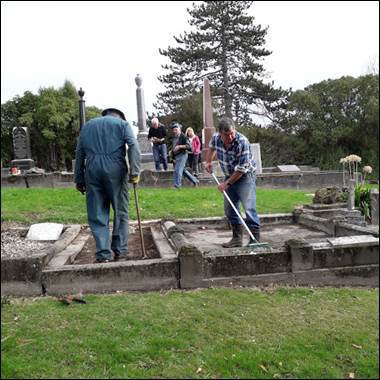 Volunteers repairing headstones and graves in Akaroa. Photo: Supplied
There seems no guarantee a memorial entrance will be installed at a cemetery and a settlers’ headstones will be restored before anniversary celebrations in Akaroa.

Events marking the 180th anniversary of organised European settlement are slated for March. The Covid-19 lockdown scuttled plans to mark the anniversary this year.

The descendants group also hoped to get the go-ahead to install a memorial entrance at the Catholic cemetery.

The headstones were among those identified as needing restoration after the Canterbury earthquakes. The gate was sought for the 175th anniversary.

Christchurch City Council head of parks Andrew Rutledge confirmed the council knew what the group wanted achieved ahead of the commemorations.

Headstone repair funds were frozen in the wake of the pandemic but another budget would be used to complete repairs in the Catholic cemetery. That work continued.

A draft conservation plan would inform the resource consent needed to install the memorial gate at the Catholic cemetery. It was due this month, he confirmed.

“At this stage we do not have a fixed time frame, but are very aware of the group’s wishes and are working hard to meet their needs,” he said.

Elected members have had meetings with the group where requirements and time frames have been discussed, he said in a statement.

When contacted, descendants group spokeswoman Linda Sunderland was disappointed the council could not commit to getting the work done by March.

After a decade of missed deadlines and broken promises, the group was not confident in the council’s ability to help deliver the entrance, or the headstones, in time.

The headstones were on a list prepared soon after the September 2010 earthquake. The council originally offered to make fixing them a pilot project, she said.

The list shrunk as council budgets and work plans changed. None had been fixed before the group asked for at least two to be completed for the anniversary.

The group asked for help with the memorial entrance before the 2015 anniversary. Council staff offered to help with the consents and plans were provided, she said.

The group provided updated plans about 18 months ago. It was disappointing there was now no fixed time frame to get the consent sorted, she said.

The group had not asked for funding. That would come from the group and Heritage NZ, she said.

“We have met their requirements plus a lot of voluntary labour and information has been handed over. The council have consistently not met their promises.”

Deputy Mayor Andrew Turner said the council was “working with them to achieve their vision for the headstones and the memorial gates in the best way we can and as quickly as we can.”