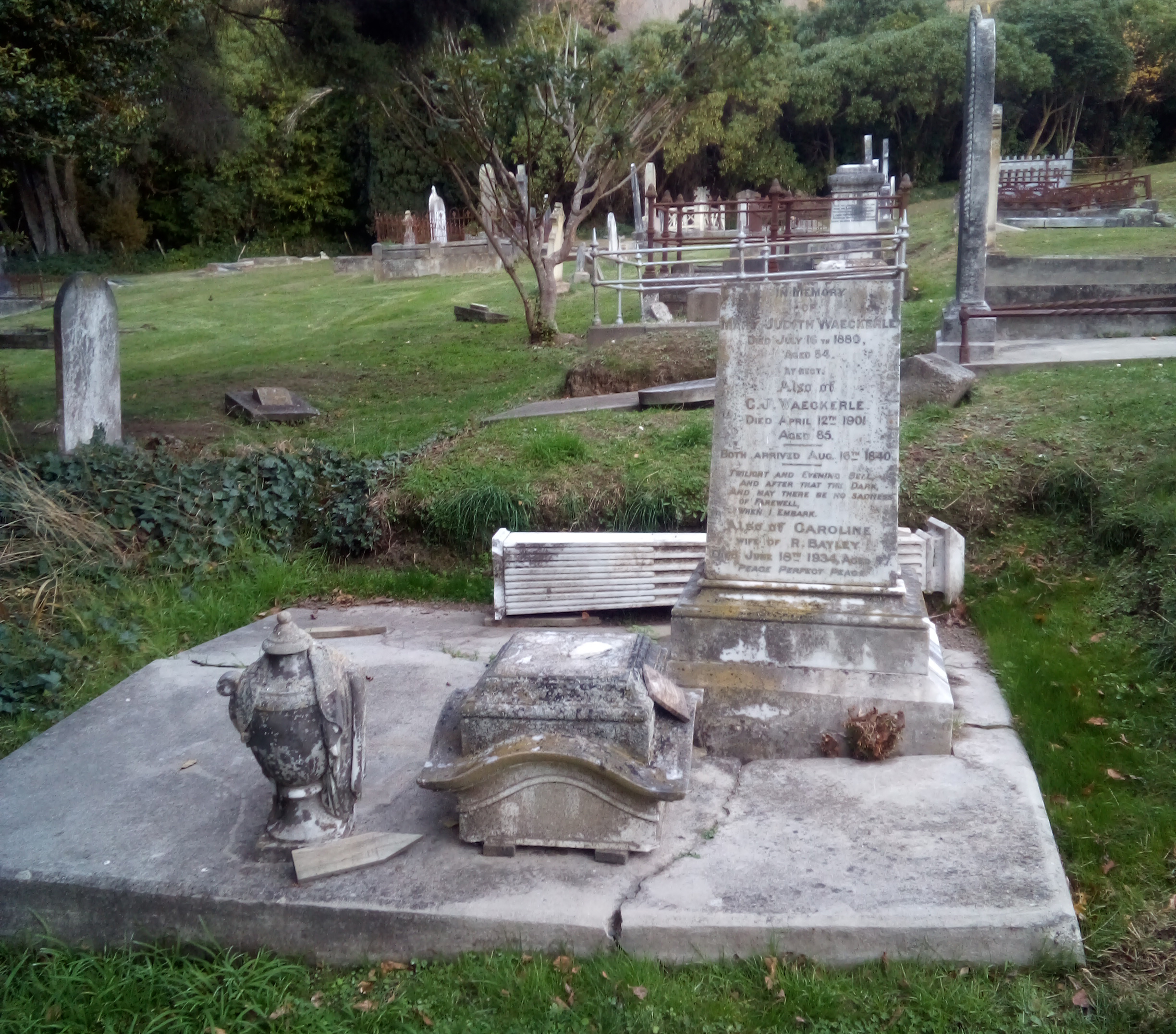 Christian Jacob Waeckerle's headstone. Photo: Supplied
A new bid to restore historically-significant headstones in Akaroa has been launched as the Christchurch City Council re-evaluates spending in the wake of the global pandemic.

If successful, it is hoped the early settlers’ headstones will be an important part of work that could also see one of the town’s cemeteries expanded and a memorial entrance installed.

The Comte de Paris Descendants Group and the Akaroa Cemeteries Group put their plans to the city council ahead of the most recent annual plan deliberations.

As the city council pared-down its Covid-19 affected budget, the groups asked for the town’s nationally important cemeteries to be made a priority in the new year. 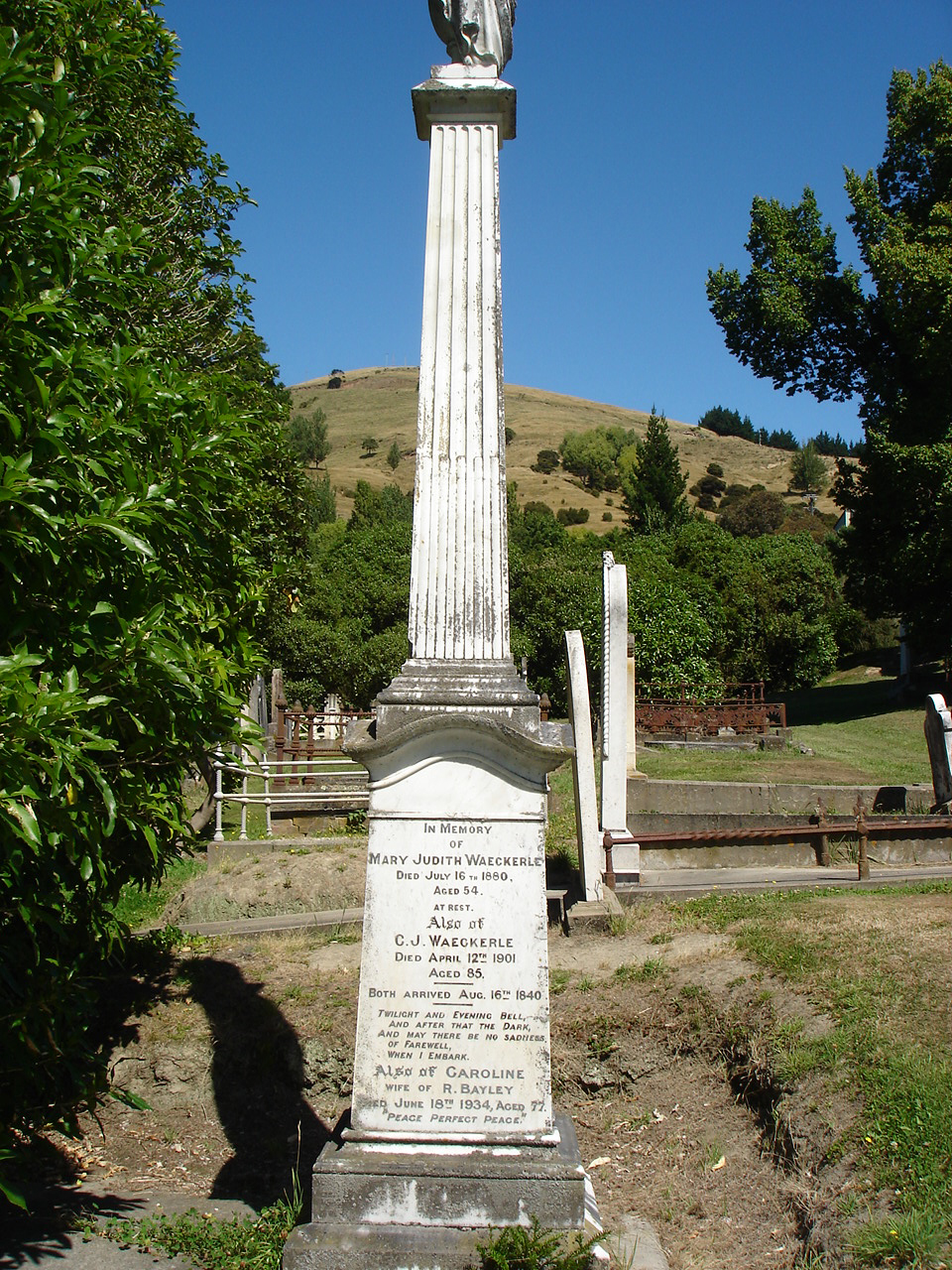 The city council initially proposed tackling up to 13 restorations, which was reduced to six in 2018.

That work had yet to start, so the groups proposed four heritage headstones should be restored this financial year. It was hoped two could be fixed by early next year.

Sunderland said the headstones of Christian Jacob Waeckerle and Marie Eteveneaux, and of Eli and Anette Bouriaud, should be in the first tranche of restorations.

Waeckerle and Eteveneaux arrived in Akaroa in 1840 on the Comte de Paris. They married and Waeckerle was Akaroa’s mayor from 1878 to 1880. They are buried in the Anglican Cemetery.

Anette and Eli Bouriaud also arrived on the settler ship. Their substantial home is a landmark on Rue Grehan, one of the earliest French streets. They are buried in the Catholic Cemetery.

Sunderland hoped the headstones could be restored by March, in time to belatedly celebrate the anniversary of the arrival of the French settler ship Comte de Paris.

The 180th-anniversary celebrations were scheduled to take place last weekend, but were postponed due to Covid-19 alert level 2 restrictions, she said.

It was hoped a memorial entrance commemorating the region’s early settlers would be installed at the top of the Catholic Cemetery ahead of the commemoration.

Sunderland said the cemeteries were a heritage drawcard and, crucially, an important, inter-generational link to the Akaroa community’s past.

The groups hoped this link would be reinforced if the city council mapped out plots on adjacent land offered by the Catholic Church for burials of all denominations.

A 2016 city council report suggested the cemeteries were approaching capacity and future burials may be shifted from Akaroa to Duvauchelle Cemetery.

Beauty and tragedy in cemeteries

There is beauty and tragedy in the Akaroa cemeteries.

The beauty is in headstones, carefully carved and intricately designed. With the towering plinths, they suggest hard-won prosperity in the newly-settled town.

The tragedy is in the descriptions etched into stone, and the stories that surface when their backgrounds are explored.

The Friends of the Akaroa Museum has been working to photograph the headstones and record the associated biographical details.

The work is being shared on the find a grave section of the ancestry.com website.

Linda Sunderland has so far photographed the headstones up to 1880, and Patsy Turner is working on the biographies.

Sunderland said many children’s names featured on the 42 headstones recorded so far.

One boy died when accidentally dragged behind his father’s horse. Horse-related accidents were numerous among the early settlers, as were drownings.

She hoped the work would further contribute to local, national and family histories, while reinforcing the historic value of – and the need to preserve – the cemeteries.

“We tend to forget that there is often more accessible history in headstones than there is in buildings,” she said.

“They are a wonderful link to our past.”