State Highway 1 from Dunedin to Palmerston is closed due to flooding this morning as rain continues to drench the region.

The main thoroughfare is also closed further north, between Glenavy and St Andrews.

Further south, MetService had earlier expected the rain to ease off by mid-morning.

Another 15-20mm of rain is expected in Dunedin and North Otago, on top of what has already fallen. Accumulated rainfall reached up to 140mm across Dunedin and 120mm in North Otago in the past 24 hours.

In Dunedin, East Taieri School and Preschool are also both closed. 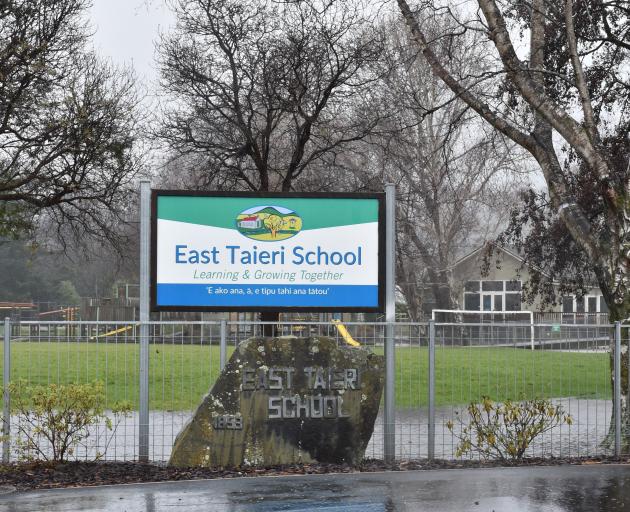 East Taieri School and Preschool are both closed due to flooding. Photo: Gregor Richardson
Civil Defence has advised parents to contact schools to find out when they will reopen.

Dunedin mayor Aaron Hawkins said this morning that the worst of the rain appeared to be over and there were no further evacuations overnight.

"We're expecting a bit more rain over the day ... and we're keeping a watching brief on some of those rivers in outlying townships in particular, but overnight we seem to have dodged a bullet," he said.

There had been no major flooding but Dunedin Civil Defence emergency management were continuing to watch streams and rivers, particularly Lindsay Creek and the Water of Leith in North Dunedin. 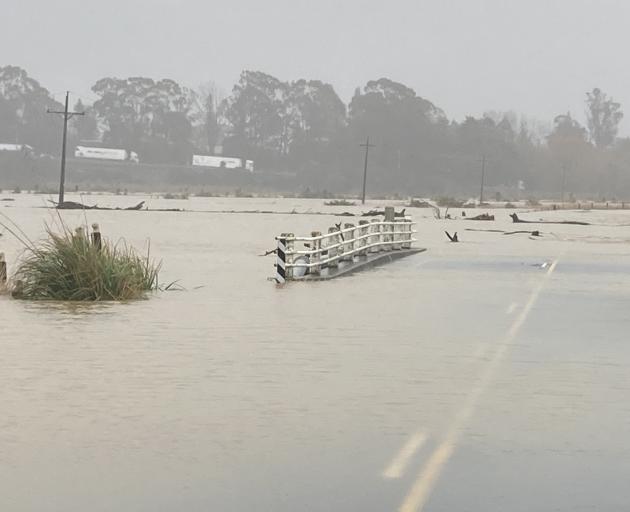 Coast Rd, near the intersection with SH1, is covered with water as stranded trucks wait for the highway to reopen. Photo: Stephen Jaquiery

The Waikouaiti and Taieri Rivers are also being monitored.

The Leith was still rising by late morning.

Dunedin City councillor and farmer Mike Lord, said there hadn't been as much rain south of the city as in Dunedin. The Taieri River was on the rise and there could still be flooding on low-lying farmland, but generally the flood protection systems were coping well.

Police said a sink hole had opened up on Gladstone Rd in Dalmore, near Aquinas College, overnight. The road is closed.

Water flowing down Gladstone Rd caused the sink hole to open up further while police and contractors were on site. 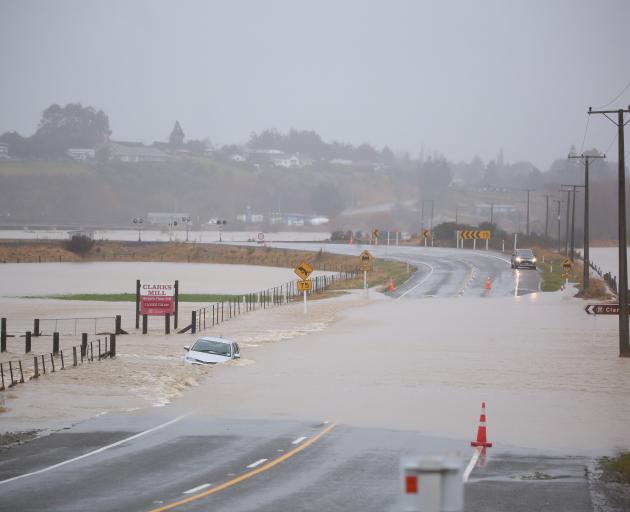 A car was left stranded in floodwaters on SH1 north of Maheno this morning, where the Kakanui River has burst its banks. Photo: Rebecca Ryan

There were also multiple slips on Portobello Rd, police said.

Seventy-one people from 26 addresses in some low-lying North Dunedin flats near the Water of Leith were evacuated last night as flood waters threatened properties.

They were allowed back early this morning and only a small number of people used the evacuation centre at Dunedin North Intermediate overnight.

A Dunedin City Council spokeswoman said students were told to consider leaving their flats if they had somewhere else to go, and those who chose to remain were asked to have a bag packed and be ready to move at short notice.

Leith St resident Aimie Clark (21), of Christchurch, said she and her flatmates did not leave on the first request, believing they would be safe as long as water did not come through their back fence. 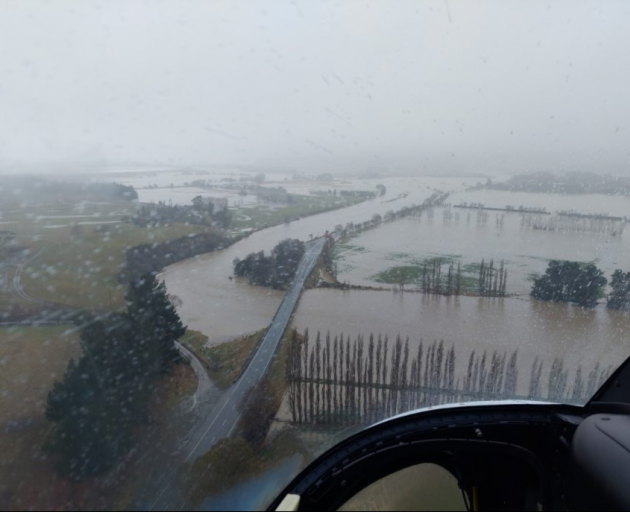 An aerial view of flooding on the Waikouaiti River over SH1 near Hawkesbury Village. Photo: Chris Knox/Civil Defence

But they got a fright when they were told evacuation was no longer voluntary, she said.

"It’s half and half, a bit scary and an adventure at the same time."

She took a bag packed with her passport, a laptop and other electronics, and a change of clothes, and planned to bunk down at a friend’s place.

Blacks Road Grocer was inundated with about 15cm of floodwater in North East Valley yesterday and was too damaged to open today. 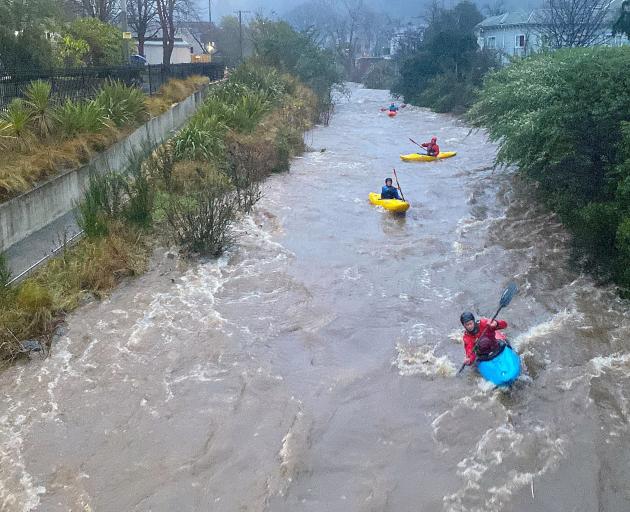 Kayakers paddle down the Water of Leith yesterday afternoon. PHOTO: CRAIG BAXTER
Shop owner Christopher Wilson believed it was caused by roadworks further up the street.

As a precaution, several patients were evacuated from the Otago Community Hospice, in North Rd, to Mercy Hospital last night.

The city council had organised an evacuation centre at Dunedin North Intermediate and alternative accommodation options were also available.

A man walks through Logan Park in Dunedin yesterday. PHOTO: PETER MCINTOSH
Flooding was also prevalent in Mosgiel and South Dunedin, and the council and New Zealand Army reserves set up sandbag stations in those areas for residents to collect.

Principal Stella Macrae said she warned parents earlier in the day about the situation and all 64 pupils had been picked up by 2.15pm.

A posted on the school’s Facebook page this morning announced the school would remain closed all day Wednesday.

State Highway 1 through Hampden is open but Big Kuri Creek has burst its banks and water has covered the bridge. 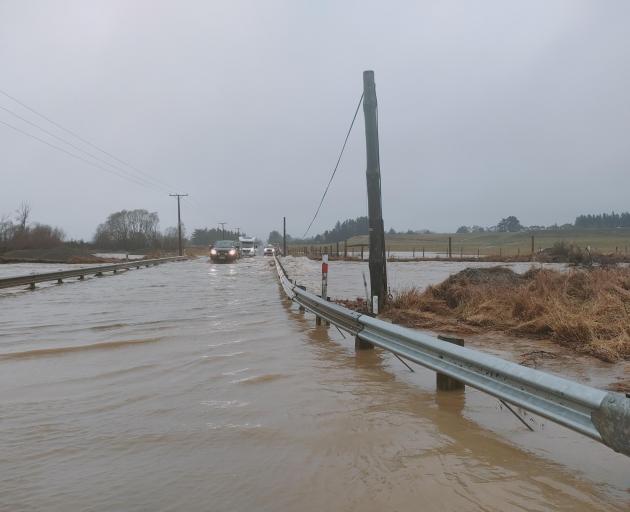 Water is covering the bridge over Big Kuri Creek on SH1, though vehicles are still able to pass. Photo: NZTA
State Highway 85 (the Pigroot) remains open but floodwater and a fallen tree mean speed restrictions are in place.

In Oamaru, Old Mill Rd and Parsons Rd were closed this morning due to flooding, along with more than 20 other rural roads around the district.

A Waitaki District Council spokesperson said the Kakanui River had plateaued overnight but was rising again early this morning. The Shag and Grange Rivers were also high and continuing to rise.

Emergency Management Otago urged people to remain vigilant of water levels in their area overnight, particularly in areas more susceptible to flooding, as the heavy rain continued across Otago. 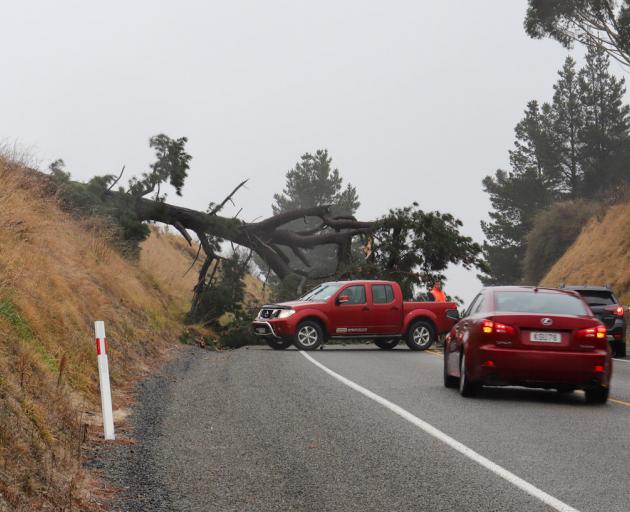 A tree has fallen on SH85, blocking at least one lane of traffic. Photo: Amy Hughes
The slow-moving weather front moved southwards down the South Island yesterday and was expected to continue until late this morning, when the rain was expected to begin easing.

"There are no detours available, so drivers may need to postpone their journeys," Mr Hall said. 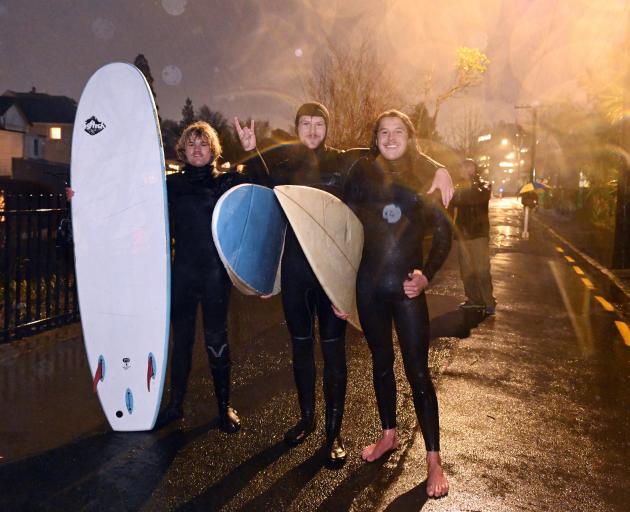 Out of the water after a surf down the Water of Leith last evening are (from left) Riley Green (19), Anton Weight (20) and brother Croyden Weight (19). PHOTO: LINDA ROBERTSON
"The flooding that is causing these two closures is expected to continue overnight until at least 9am [today]."

He said the Waikouaiti River and the Shag River/Waihemo were also rising and there was a risk of flooding across SH1 and SH85, respectively.

Those travelling on SH1 north of Dunedin to Waitati were urged to take "extreme care" because of uneven surfaces and surface flooding.

The highway to Port Chalmers (SH88) also had flooding in several places.

Near Milton, the intersection of Back Rd and Springfield Rd was also badly affected by flooding.

State Highway 87 to Middlemarch is open but surface flooding means speed restrictions are in place.

There is a similar situation on SH85 where the Shag River is threatening to burst its banks.

Crews were out this morning to signpost any flooded areas.

Otago Regional Council engineering staff were positioned at vulnerable rivers and streams overnight, while emergency services, lifeline agencies and staff from the Clutha District, Waitaki District and Dunedin City Councils watched the situation closely and were prepared to act as events unfolded. 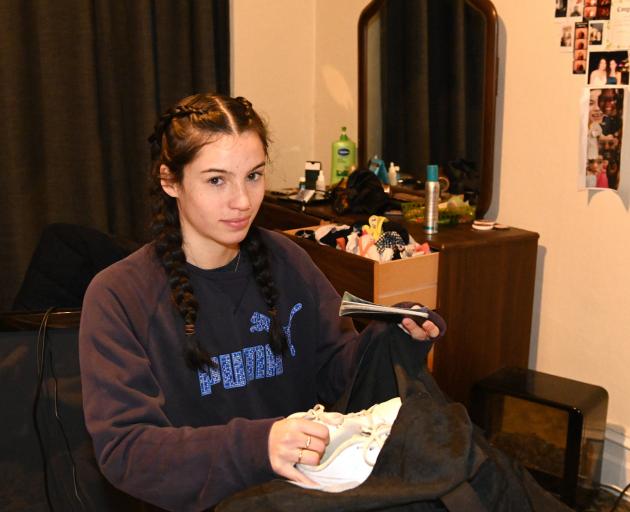 "We’re keeping a very close watching brief on the situation right across Otago, and are ready to escalate if necessary," he said.

In Canterbury, schools closed, businesses were inundated and dozens of roads closed around Christchurch as heavy rain lashed the region.

More than 70mm of rain had fallen in the 24 hours to yesterday afternoon, amid the city’s wettest July on record.

Emergency management staff at work in the Dunedin Emergency Operations Centre, Moray Pl, during heavy rain in the city. PHOTO: LINDA ROBERTSON
Some residents said it was the worst flooding to hit in a decade.

Principal Christine O’Neill said it was the first time anyone could remember floodwaters closing the school.