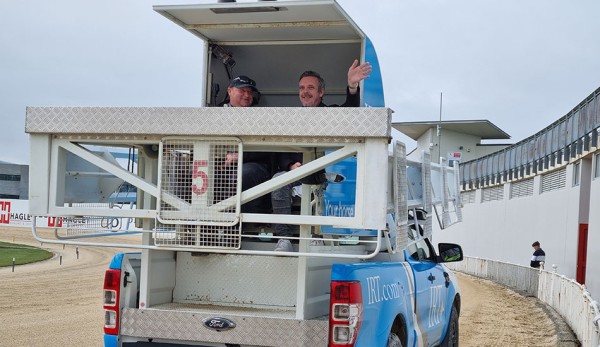 Lobban, who plays the socially awkward Damo Johnson on the long-running soap, has a lot of history with racing, though yesterday he got to experience Addington like never before.

His VIP treatment included him seeing the mobile despatch from the best seat in the house, alongside starter Ricky Donnelly.

"That is one of my top experiences," Lobban told Harness Racing Unhinged's Nigel Armstrong. "The adrenaline and the horses gathering speed"

"I never imagined being in the mobile - wow!"

Lobban's involvement with the sport goes back decades.

"For me and my dad (Gordon) it's a bonding thing, we put a couple of dollars each way," he says , "we love Addington and also the grass tracks like Motukarara. I've been coming here since I was a kid."

Mighty Son won four from 10 in this country in the mid 1980s before heading across the Tasman with Harness Racing Australia statistics showing he ended up winning 22 races from 66 starts.

Lobban's appearance at Addington comes at a time when his character is front and centre on "Shorty".

Damo, who's previously battled bowel cancer and a shooting during a robbery, was hit by a bus just last week and is fighting for his life in intensive care.

But he's not giving anything away about his on-screen fate.

"It's a full-on storyline - so we'll just have to see what happens."

Thankfully he doesn't face such dilemmas in real life - his biggest decisions at Addington revolved around backing winners on a day when double-figure winners were not uncommon.