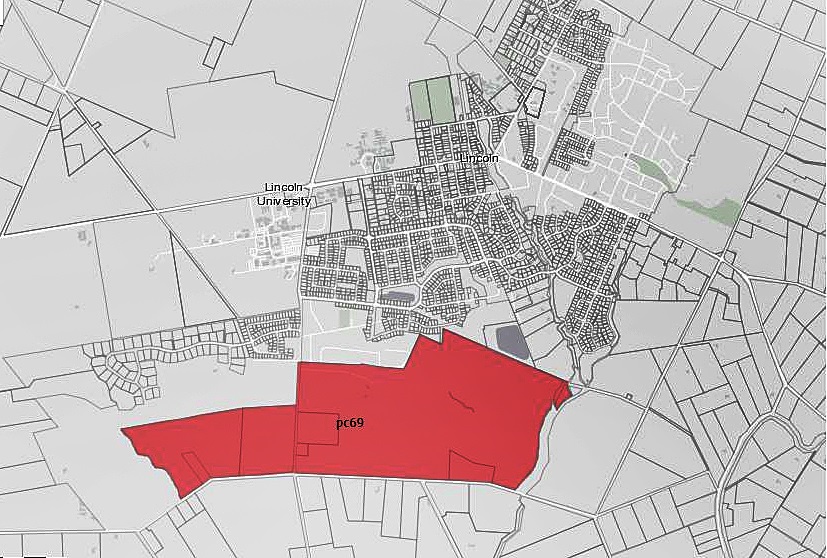 The proposed PC69 development south of Lincoln. Image: Supplied
Commissioner David Caldwell is considering his recommendation on the controversial Lincoln South Plan Change 69 application now that the hearing has closed. 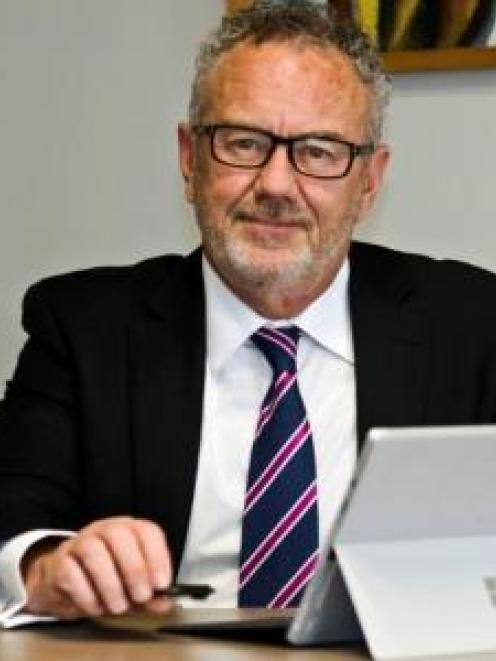 David Caldwell. Photo: Supplied
On the last day of the hearing, the applicant of Carter Group submitted an amended Outline Development Plan, suggesting the maximum number of residential sites may be limited to less than the 2000 planned previously.

The development area shall provide for a maximum of 1710 homes, beyond which an integrated transport assessment would be required, the amended plan said.

The commissioner heard from about 50 experts and submitters at Tai Tapu Community Centre over five consecutive days.

“There’s quite a bit to, obviously, for me, to consider, it’s been a pretty full-on week,” Caldwell said towards the end of the hearing last Friday afternoon.

If the application was approved in its current form, it would see rural land rezoned for the proposed Lincoln South.

The majority of Lincoln residents opposed the development in the submission process, with 74 per cent of submission points in about 260 submissions being in outright opposition to the plan change.

Closing the hearing, Caldwell thanked everyone for their contribution.

“There are some significant issues for people involved, obviously some very good evidence from the submitters and the experts,” he said.

On day five of the hearing, summary statements on behalf of Selwyn District Council were tabled, including from urban design and landscape expert Hugh Nicholson.

Nicholson said a “first-come-first-served” approach through private plan changes did not allow for meaningful public consultation.

He believed additional residential or business capacity in the township should follow a more strategic spatial planning process. This would allow the costs and benefits of alternative growth options to be assessed and discussed with the wider community.

He noted that, according to evidence at the hearing, there were alternative options for urban growth in Lincoln.

“In particular I consider that a strategic spatial planning process would allow further discussions with Lincoln University and Landcare Research regarding their future plans and the potential for finding alternative locations for some of their agricultural activities to the north of Gerald St,” Nicholson said.

“This land would be valuable from an urban growth perspective. There are also areas to the west and north of Barton Fields and the north of Flemington and Rosemeryn, which are potentially suitable as urban growth areas.” 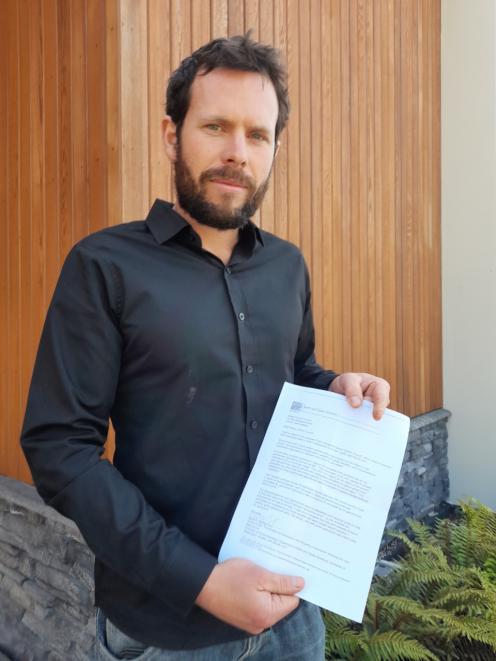 Lincoln market gardener Sam Bridgman-Smith is supported by American author and soil guru Professor David R Montgomery in his opposition to Plan Change 69. Photo: Supplied
‘Finest agricultural soil’ would be lost with zone change
A Lincoln market gardener says a proposed 1700-home development near his business would cause the loss of some of New Zealand’s finest agricultural soils.

Sam Bridgman-Smith has been among people speaking to their submissions at a hearing for the Plan Change 69 zone change application, held at Tai Tapu Community Centre.

His speaking time was scheduled to follow his neighbour John Greenslade, who is selling the farmland to Carter Group for the development and who supports the plan change. However, Greenslade did not turn up to the hearing, having advised he no longer wished to be heard.

Bridgman-Smith told Commissioner David Caldwell he felt privileged to make a modest living as a full-time market gardener. His background was as a research technician, and in frontline police work in Christchurch.

He feared that as a society, Kiwis had forgotten just how crucial soil quality was to prosperity. In his lifetime alone there had been a dramatic decline in these soils around the country.

In his job as a market gardener, he was inspired by American author and soil guru Professor David R Montgomery, based at the University of Washington. Montgomery had kindly provided a written statement for the hearing after Bridgman-Smith had contacted him.

Bridgman-Smith brought the statement, addressing the district council, in hard copy and read it out.

Montgomery said the reclassification of rural land to residential and industrial was a driving force behind the loss of farmland both globally and in New Zealand.

“There is ample evidence to support the contention that societies that do not protect their soils do not last. Ongoing soil loss and degradation threatens to reduce global food production by a third over the coming century,” Montgomery said.

Bridgman-Smith said the soils in the almost one hectare he leased to grow leafy greens and vegetables at his market garden were some of the finest in the country.

“If I dig a hole, it’s black for about 40cm until I reach the subsoil. There’s barely a stone to contend with and the plants grow like a dream,” he said.

In answer to questions from Caldwell, Bridgman-Smith said he made a living from his enterprise, having met his goal of almost matching his former policeman’s salary.

Following speaking at the hearing, Bridgman-Smith told Selwyn Times he did not hold it against his neighbours John and Leslie Greenslade for selling their land to Carter Group. He was, in general, not against landowners selling their land.

“I don’t want to get on the wrong side of good people,” Bridgman-Smith said, referring to John.

“It’s just what happens to land once it’s sold,” he said.

In their submission in support of the plan change, John and Leslie said their farm was already being encroached on by housing from the Te Whariki and Verdeco subdivisions.

“We have already had a few complaints about the noise from general farm machinery such as irrigators, tractors and motorbikes, which we feel will only increase as the houses get closer. The noise from stock is also underestimated by people unused to country life, whether it is simply bringing in the cows for milking at 4.30 in the morning, weaning calves or shifting other stock. The noise taken for granted by us is not always viewed the same way by other people.”

They believed the large natural springs they had fenced off and protected in the area would be enhanced with the development, so the whole community could enjoy them.

The PC69 hearing was held over five days last week. Altogether about 50 people were heard.

The commissioner will now deliberate prior to making his recommendation. 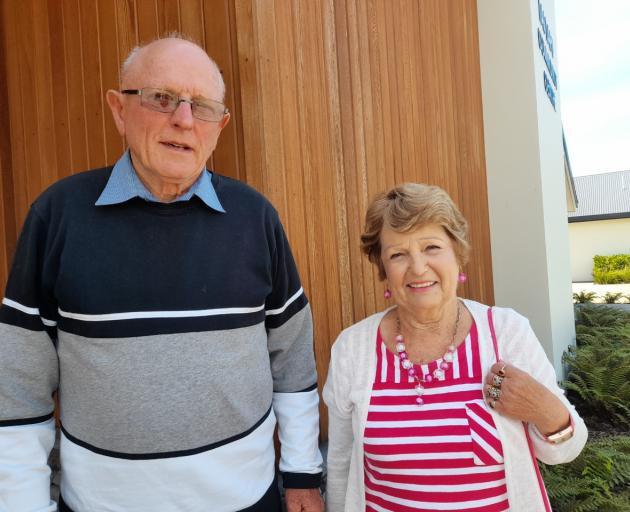 In a letter from the Ministry of Education tabled at the hearing, planning consultant to the ministry Hugh Loughnan welcomed the developer’s planner having recently recommended changes to the development’s plan to provide for new educational facilities at the site if required.

The ministry had earlier submitted on the PC69 application about its concern on the development adding pressure on Lincoln schools.

The need for a new school in Lincoln is among a range of issues highlighted by submitters at the PC69 hearing last week. Others were traffic congestion in Lincoln and on Springs Rd, pressure on infrastructure, increased threat of flooding, and environmental and climate change effects.

Retired farmers Lynette and Ronald Beazer were among residents concerned about pressure on the township’s facilities – its supermarket, medical centres, sports fields and roads. They told the Commissioner that such a development would be better suited to Rolleston, which was set up with community facilities and the Southern Motorway.

“Lincoln now is basically stretched to the maximum. There’s not enough facilities even now. If you want to go to the doctor, you can wait anything up to two weeks to get an appointment with your specific doctor,” Ronald said.

Submitter Alastair Ross echoed their concerns. He said it was difficult to cross Gerald St due to traffic congestion, mentioning the district council’s plans not to undertake roading upgrades until 2027.

“Adding more people without the appropriate upgrades for infrastructure, we are making Lincoln dangerous for people,” Ross said.

Resident Brie Liberty spoke to a submission from more than 80 residents at neighbouring Verdeco Park. She said more of the subdivision’s residents had come on board since the submission deadline, and she now represented more than 100 adults and their families.

“Crossing Springs Rd at the moment with young children is quite terrifying, and I can imagine doing it when the traffic is greatly increased will be impossible,” Liberty said.

Waihora Ellesmere Trust chairman Hamish Rennie said Lincoln’s LI (Liffey) Creek and Ararira/LII River were tributaries to Lake Ellesmere/Te Waihora, as were the springs, streams and drains flowing into them. The trust opposed the application due to the threat of adverse effects on water ecology and the risk of sedimentation and contamination.