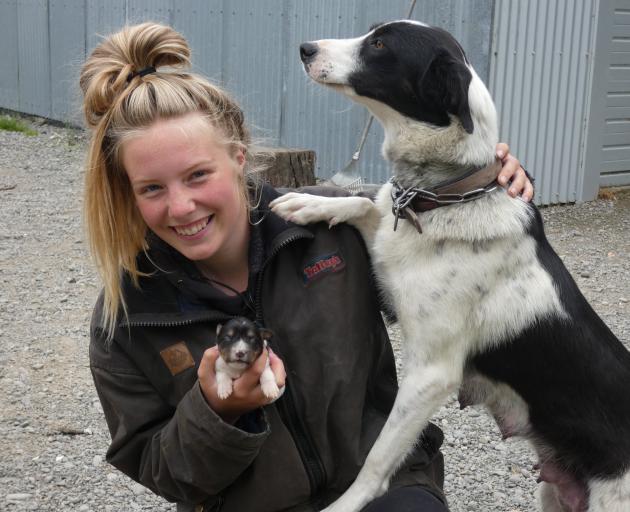 Zoe Bain is a natural with all the animals at her grandparents’ Canterbury farm, Broadlands. PHOTOS: TIM CRONSHAW
Zoe Bain plucks out a small pup from a litter of eight as a young heading dog looks on without a hint of concern.

Its mother seems to sense that the 19-year-old has the natural confidence of handling animals that comes with working on a farm.

She plans to keep one of the progeny, and whether it’s this pup or the sole male among them has yet to be decided.

They’re happy their granddaughter has brought a new lease of life and fresh enthusiasm to Broadlands farm, home of Adelong Poll Dorset Stud in Canterbury’s Ellesmere. 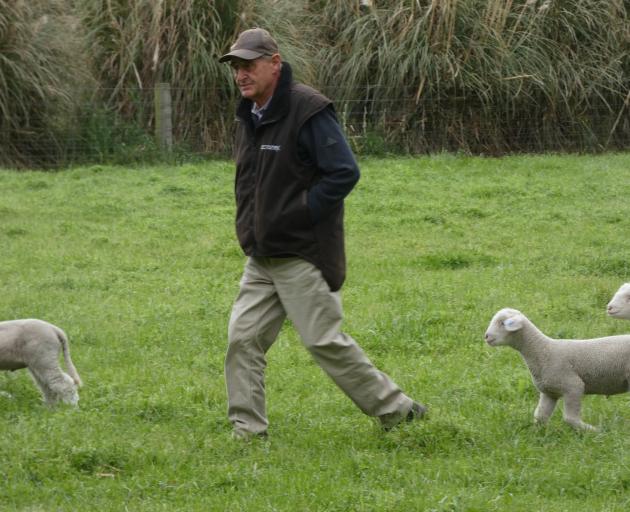 Neville Greenwood rounds up poll Dorset lambs at Broadlands farm.
A boxful of ribbons and a stack of sale catalogues are testament to their success with the breed. The latest win was at the Ellesmere A&P Show in Leeston, where 384-18 was crowned champion sheep of the show against all breeds.

The late bloomer was shown as a hogget at the Canterbury A&P Show but didn’t make the first cut.

Mr Greenwood says the ram was his pick, but the judges didn’t see it that way — and that’s just the ups and downs of sheep showing.

‘‘Commercially, he’s got very good numbers. He’s a moderate sheep, which is what people look for nowadays and we try to breed. He’s got very good 100-day and 200-day growth figures for his progeny and a very good muscle scanner and he’s got a very good hindquarter and 1-3 on the foot score. So he’s pretty hard to fault ... in my opinion.’’

More than likely 384 would have been put to the test again at the Canterbury show had it not been cancelled because of Covid-19.

Miss Bain no stranger to the fickle fortunes of sheep exhibiting. 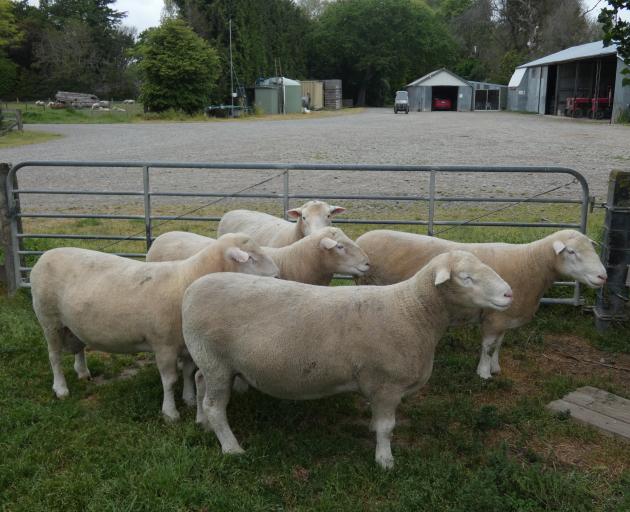 Ellesmere A&P Show winner 384-18 is the standout in this year’s crop of poll Dorset rams at the Greenwoods’ farm.
She was supposed to be the steward at the Ellesmere event, but was put out of action by an appendix operation. Normally, she’s up early to help her grandfather load stock for shows and likes nothing better than sunrise starts in the stock pens before the crowds arrive.

One of nine grandchildren, she knew from early on that the farming life was for her.

She can recall being barely 18 months old and putting on plastic bags over her shoes to feed pet lambs in the front paddock with ‘‘Nana’’.

There were always squabbles with her siblings to get in the prized seat with ‘‘Pops’’ in the red Datsun truck, which was retired only two years ago.

‘‘I think I went to the Christchurch Show when I was only like 2 or 3 months old — there’s a photo of me. I’ve only missed one and obviously because of Covid now two, but there’s been all the other shows too.’’

During weekends and school holidays she would help with the weighing, weaning and tailing, making sure the the right tag number went to the right lamb and the correct markings went on the ewes. 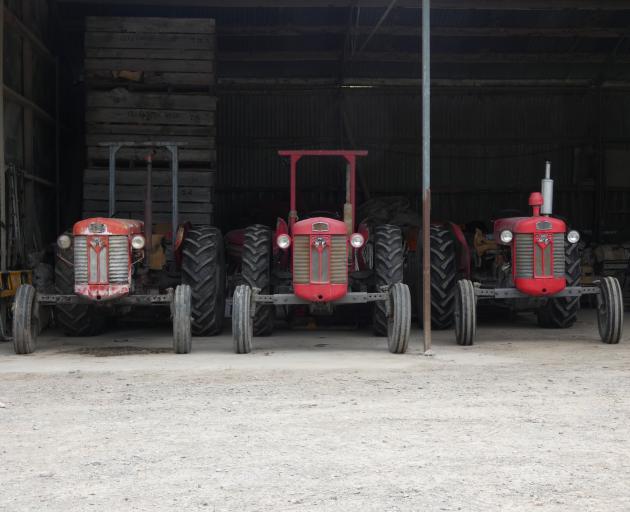 A line-up of Massey Fergusons at Neville and Dianne Greenwoods’ farm, Broadlands, in Ellesmere.
She has been working full time for about a year now at Broadlands, and will be mixing this with theory when she starts on a 20-month Primary ITO course this week.

‘‘I can’t sit still and could never sit in an office all day, so just being outside and always moving I find my brain is just going. Obviously, I love the animals and that makes it priceless.’’

She gravitates towards technology and the genetic side of stud breeding, intrigued by eye muscle scanning and learning more about pairing this with their temperament and other traits.

Poll Dorsets come first because of the family connection, she says.

‘‘I can go out there with the rams and they look at you funny and just keep doing their thing. There’s other sheep and you go near them and they would be off or would come at you, but they’re just relaxed and not fazed by much really.’’

Mr Greenwood says his granddaughter isn’t shy about asking questions and likes to know everything that’s happening on the farm.

This natural curiosity is needed for stud breeding, he says.

‘‘She keeps me motivated and keeps me going. I dare say it’s easy to stop, but if you give her two or three years and she wants to do something then that’s fine with me.’’

Miss Bain has learned that farming isn’t a Monday to Friday job and can be regularly seen pitching in on weekends without being asked.

Her grandfather has helped her with mating, but likes to leave much of the decision-making to her so she can learn from her successes and mistakes.

‘‘You look at the ewes and if you want more bone or more muscle on them you just work it out from what rams you have and foot scores and eye muscles,’’ Miss Bain said.

‘‘Grandad gives me suggestions and then I choose, but if I choose an idea that could’ve been a bit better then he will suggest another. It’s all testing waters really.’’

She must be doing a half-decent job as her grandfather hasn’t put them out to the works mob yet.

Mr Greenwood was 13 when he started the Adelong stud in 1970. His father wasn’t so keen on poll Dorsets and preferred the ryeland breed, now seldom seen in Canterbury.

His advice to his granddaughter is for her to use her youth wisely as it doesn’t last long.

‘‘You’ve got to be passionate or it just doesn’t work. Average or mediocre doesn’t cut it.’’

About 550 poll Dorsets are mated each year to between 10 to 12 stud sires. Genetics have been brought in from Australia in the past and will likely be brought in again in the future to freshen bloodlines.

They also breed Suffolk-cross rams, putting a Suffolk sire over poll Dorset-Texel ewes. About 40 of these 18-month-olds will join 120 poll Dorset rams in their December 1 sale.

The sheep are run on about 200 hectares with some pea and green bean growing, and about 140ha is leased out to a dairy farming family.

Miss Bain hopes to show her own sheep next year, Covid-19 permitting, and visit studs here and in Australia to learn more about breeding.

Part of her is drawn to working on a beef cattle farm and another part is attracted to the stock agent life and working in the genetics business. The end goal is to have her own stud and farm.

‘‘Zoe remembers all the numbers and stud sires and she’s got a phenomenal memory. We will be out in the yards and she will say that’s by so-and-so, a ram she might have seen months ago, so that really helps. With all the new computer [technology], electronic wands and identifying electronic tags, Zoe’s up with the technology.’’

They agree both ages have their strengths and can learn from each other.

‘‘So it’s been good having Zoe here,’’ Mrs Greenwood said.

‘‘But we want to encourage her to get as much experience as she can before she really decides what she wants to do.’’

She has to learn from other people and other ideas, Mr Greenwood says.

‘‘She’s just got to keep going. It’s a long game, a very long game. Once you get hooked on genetics and animal breeding it’s a bit like a drug — it’s very difficult to give it away.’’